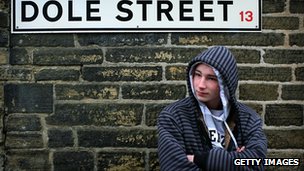 The Independent's Andreas Whittam Smith thinks that before we blame the eurozone crisis for sharply rising unemployment, we should look at our homegrown failures:

"A study published this week by the Institute for Public Policy Research showed that in Austria, Germany and Switzerland, at least 40 per cent of school-leavers enter three-year apprenticeships leading to a recognised qualification. In England, only 6 per cent of 16- to 18-year-olds were in apprenticeships in 2010, and apprenticeships here last, on average, just over one year.

"Every country has its own weaknesses, and one of ours is a historic, persistent neglect of education and training."

Seumas Milne adds in the Guardian that it isn't just Europe that is being used as the wrongful scapegoat for joblessness:

"The price being paid in wasted lives and broken public services is the direct result of the City's uncontrolled derivatives trading and monumental debts - far outweighing the public debt run up to clear their wreckage - that sparked the 2008 crash. The eurozone crisis reflects the aftershocks of that breakdown and the attempt to protect banks and bondholders across the continent.

"A transactions tax would not only raise cash but help to calm the speculative frenzy in financial markets that led to meltdown in the first place."

Guy Stagg suggests in the Telegraph that the reason why youth unemployment has risen is because politicians aren't interested:

"Youth unemployment has been increasing for years. And nobody in Westminster has done anything about it. It is not just the recession that's to blame. In 2005, at the height of the economic boom, 25 per cent of 16 to 17-year-olds were not in education or employment. Indeed David Miliband has admitted that the problem started under Labour. So why have politicians been so slow to act?

"The truth is they just don't think youth unemployment matters. After all, young people are at the bottom of the jobs market. They earn less. They spend less. They are taxed less. They can claim fewer benefits."

The Times' David Aaronovitch says joblessness can create a "slow social decline" so he likes the idea of guaranteed jobs:

"The Institute for Public Policy Research has, for example, suggested that there should be a job guarantee scheme where anyone unemployed for more than a year will be given (and obliged to take) a job subsidised by government. And yesterday the chief executive of the RSA, Matthew Taylor, floated the idea of selling a 'bond for hope', in which members of the public bought a special bond, the proceeds of which would fund, say, 250,000 one-year jobs for the young unemployed, many of them in the area of public services. Real Big Society stuff.

"I'd buy these bonds. So would the Archbishop. So might you. And we wouldn't even have to wait for Europe to do what David Cameron tells it to."

Labour blogger Hopi Sen also looks at the proposed solutions in his blog and wonders why policies increasing demand are not being heard:

"The moderate left is aware that its fiscal tools to tackle the immediate crisis are horribly limited. The idealist left is uncomfortably aware they don't actually have a plan to offer, other than disbelief at the way things are now. As a result, the right tells the electorate that pain is the only way forward, and they at least sound sure of their prescription."