Daily View: What should happen to Saif al-Islam Gaddafi? 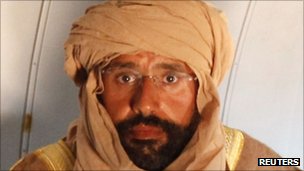 Following the capture of the late Libyan leader's eldest son, Saif al-Islam Gaddafi, commentators ask how he should face justice.

In the Times, Geoffrey Robertson QC argues against a death penalty as Said al-Islam has the makings of an "arguable" defence:

"He was, after all, part of Libya's legitimate government and thus entitled to urge and use force reasonable in the circumstances to put down an armed insurrection. In The Hague, if he plays by the rules, he could put the prosecution case to a scrupulously fair test. He would be permitted to summon witnesses to his good character -Tony Blair and Peter Mandelson, perhaps, or an LSE professor. His judges would be independent and his conviction beyond reasonable doubt is by no means a foregone conclusion."

Phillipe Sands argues in the Guardian that there should be a trial. However, it shouldn't be in Libya but should instead be conducted by the International Criminal Court:

"Many of those who say the trial should take place in Libya nevertheless recognise that Iraq's proceedings against Saddam circumvented many of his greatest crimes and came to an expedited conclusion, and wonder whether sham, local justice can ever be avoided in the aftermath of a bloody conflict. Also, the international justice may not offer the swift justice some will want, as the abortive trial of Slobodan Milosevic made clear. Others with a clear interest in what happens next will include those in the west who were, until recently, friends with Saif, wondering whether his extensive contacts will be more or less public in a trial in Libya or The Hague.

"The ICC intervention helped transform the outcome in Libya by contributing to the delegitimisation of the Gaddafi regime. Military action followed and was decisive. But the ICC's role made the crimes an international matter, and in staying the hand of vengeance the Hague judges will have to be involved."

But Omar Ashour warns in the Independent that the ICC might not get a chance to hold the trial:

"The NTC [National Transitional Council], and many of its figures, want to remain popular. Handing Saif to the ICC will not win them any popularity. Any Libyan politician who dares to hand him over will probably face popular outrage, political outbidding and, possibly, an armed response. Unless the NTC receives major incentives, the chances of it handing Saif to the ICC are slim."

David Bosco explains in Foreign Policy why having a trial in the ICC will be such a sticky issue:

"A key element in the Saif endgame now will be the position of the Western governments that ensured the NTC's victory and still have important leverage. And here the ICC has cause for concern. Key Western officials have often appeared agnostic as to where the Gaddafis should face justice. For the court, those signals raise a disturbing possibility: that the institution has been used as an instrument in the broad Western push to isolate, delegitimize, and ultimately remove the Gaddafi regime. With that accomplished, will the West still make the ICC a priority?"

If there is a trial, the Daily Mail's Peter McKay says discussions turn to whether Saif al-Islam might reveal details of his pre-downfall friendships with Tony Blair, Prince Andrew and Peter Mandelson:

"Certainly there are issues on which Saif - if he's allowed to speak - may bring clarification. The mysterious process whereby madman Muammar Gaddafi was embraced by his former enemies in the West after renouncing terror and giving them access to his oil. How did that work?

"None of what Saif might say necessarily reflects well on our politicians - Labour, Tory and Liberal Democrat. Nor on the Americans, our Secret Intelligence Service, the Royal Family, Big Oil and the banking sector. Not forgetting the London School of Economics. Whichever way you look at it, the Gaddafis just knew far too much, didn't they? They had to go."