US View: How a UK phone-hacking scandal could affect the US 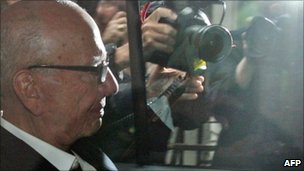 Commentators look at what the News of the World phone-hacking scandal means for the US.

In the LA Times Timothy Garton Ash gives recap of how the scandal has spilled into the US:

"Hugh Grant appeals to Americans to wake up to Rupert Murdoch's pernicious influence on their own media. Sen John D Rockefeller IV calls for an inquiry into the activities of Murdoch's parent company, News Corp and whether Americans' phones were hacked. If it turns out that 9/11 victims were targeted, as suggested by the campaigning British MP Tom Watson, then this will no longer be just a foreign story. Only on Murdoch-owned Fox News is it as if none of this had happened. A clip from Fox News Watch, filmed during a commercial break, shows the panelists joking about the one story they are not going to discuss. News watch indeed."

In the Atlantic James Fallows compares the New York Times' website front page to Fox News' website. At the time of writing - when News Corp had withdrawn their bid for the remaining share of BSkyB - there was no mention of what he called the "Watergate-scale" Murdoch scandal. This he sees as proof that Fox News's credentials are questionable:

"Here's a challenge: For anyone who denies that Fox is a propaganda operation rather than news, run by apparatchiks rather than journalists, let's see an explanation of the difference between these pages and the story Fox pretends isn't there."

David Ignatius says in the Washington Post that Rupert Murdoch's success could have more to do with his rivals than being the voice of the people:

"In the fair-and-balanced spirit, let me grant Murdoch one important point: He wouldn't have been so successful if some of his venerable rivals hadn't, in fact, been elitist, skewed to the left and sometimes just plain boring. Murdoch's publications and television networks may have coarsened standards, but they are also entertaining. Being irreverent is not the problem. The media world could use more of that Murdochian energy, not less"

Massimo Calabresi concentrates in Time's Swampland blog on how the bad news for Murdoch spread to the US thanks to calls for an investigation into claims that 9/11 victims may have had their phones hacked - something that Calabresi says is unsubstantiated:

"Yeah, Director Mueller, get right on that. I'm not saying we won't eventually find out that some reporter paid by NewsCorp has done something unethical on this side of the Atlantic at some point in the past; maybe it will even involve 9/11 somehow. What I am saying is that as it stands the 9/11 hacking story is thinly sourced, to put it mildly."

The New York Times cast the withdrawal of the bid as a family feud between Rupert Murdoch and his son James as it claims Rupert Murdoch and his chief operating officer, Chase Carey, overruled James Murdoch "consulting him only after the decision was all but final". It goes on to describe further differences between the two:

"Though Fox News has of late become the thrust of his political power in the United States, as well as a major source of revenue, his newspapers were the seedlings of his vast media enterprise. His emotional attachment to them runs deep, and they remain influential platforms not just in this country but in Britain.

"James Murdoch, 38, is said to share none of his father's romantic notions about newspapers."

Former New York Post reporter Ian Spiegelman tells Howard Kurtz at the Daily Beast that for scandals at the New York Post and News of the World the rot goes back to News Corp:

"News Corp VPs are nationless. It doesn't matter where you put them - they are plugged into their own, floating nation... namely News Corp. You don't always see them, but they are always hovering between the editor-in-chief and Rupert, and their loyalties remain not with any country or system of laws. Imagine the kind of pressure such a misty, loyalty-free menace could put on a reporter who actually lives where he lives and whose life is there. You want to know if this London poison is likely to have spread to New York? Yeah. But don't blame London."