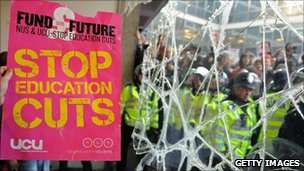 Commentators discuss the violence at student protests against a change in tuition fees.

James Forsyth argues in the Spectator that the Lib Dems have been spared by "idiotic students":

"The violence at today's student protest is, politically, a boon to the coalition. The story now is not the Lib Dems breaking their word but the storming of Millbank. The violence will also have cost the no-fees cause much public sympathy, we don't like attempts at aggressive direct action in this country."

In the Mirror the musician Billy Bragg disputes the critics of violence, finding fault with the Liberal Democrats:

"Those lining up to condemn the actions of students at Millbank as contrary to the traditions of democracy should be reminded it is the Liberal Democrats who have failed to live up to those traditions, not the students.

"By making a manifesto commitment to abolish tuition fees, the Lib Dems picked up hundreds of thousands of votes from those hoping to see the return of the fully funded education enjoyed by earlier generations."

Senior lecturer in philosophy at Roehampton University, Nina Power says in the Guardian that the violence comes from justified anger:

"It is hard to see the violence as simply the wilfulness of a small minority - it is a genuine expression of frustration against the few who seem determined to make the future a miserable, small-minded and debt-filled place for the many.

"The protest as a whole was extremely important, not just because of the large numbers it attracted, and shouldn't be understood simply in economic terms as a complaint against fees. It also represented the serious anger many feel about cuts to universities as they currently stand, and the ideological devastation of the education system if the coalition gets its way. It was a protest against the narrowing of horizons; a protest against Lib Dem hypocrisy; a protest against the increasingly utilitarian approach to human life that sees degrees as nothing but 'investments' by individuals, and denies any link between education and the broader social good."

In contrast, the Telegraph's columnist Janet Daley predicts on the Today programme that this is going to capture the sympathy of the country:

"In my day student demonstations we about not one's own interests... We were fighting for civil rights, black votes in the south and against de facto segregation in the north and against war in Vietnam. As a result those demonstrations really did capture the imagination of a generation.

"What these demonstrations seem to be about is something much more unrealistic and self-serving which is to say that the whole of society should pay for your education."

The Times editorial argues [subscription required] staunchly against the principle behind the protests and suggests that the violence was directed at the wrong party headquarters:

"Nick Clegg allowed his party to adopt a profoundly unrealistic policy before the election and made promises he neither could nor should keep. It is right that the Lib Dems should pay a political price for their ludicrous posturing. And it is understandable that the inability of Mr Clegg's party to keep his ridiculous pledge has provoked frustration and led to protest. But the fact that the broken windows were outside Conservative Party headquarters suggests that logic chopping with the Lib Dems was not really the aim of the violence."