Commentators consider the legacy of former president Nestor Kirchner and ponder how his death will affect Argentina's future. 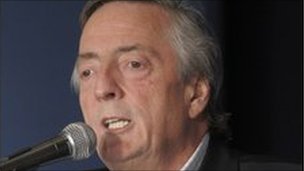 The death of Nestor Kirchner could be a chance for his wife Cristina to really assume power, writes Rosendo Fraga on the website of Argentine newspaper La Nacion:

"It might be suggested that some of the people in power most closely allied with Nestor Kirchner may now see their influence decline or could be removed from office. For example, Cristina now has an opportunity to replace some much criticised members of the administration".

"On May 25, 2003, Nestor Kirchner became the unexpected president of an Argentina destroyed by successive misfortunes: genocide, frustration, betrayal and ineptitude. His preparation for this role came from having been mayor of Rio Gallegos and nine years as governor of Santa Cruz. But it come too from having been a militant youth, fighting for a better world."

"He wasn't a charismatic leader, nor did he arouse waves of sympathy. But he was a leader who exercised power without doubt. That allowed him to keep his coalition united, no matter what he had to do."

Newspaper La Capital, in Rosario, Argentina, says it is "willing to follow his words to continue transforming our country":

"Argentinians must be calm. Cristina Fernandez is a statesman who has demonstrated courage, creativity, courage and, above all, a great conviction to continue driving this country towards a destiny of growth and social justice."

The Diario Rio Negro in Argentina also believes Mr Kirchner's death is a loss to the nation:

"For President Cristina Fernandez de Kirchner, her husband's death has been a cruel blow, not just because it deprived her of the person she shared her life for 35 years but also because he had been the dominant figure of her government - the man driving the economy, in effect electing ministers and secretaries and managing relations with key political and trade union allies."

"Nestor Kirchner's death leaves a huge political vacuum in the region and sows uncertainty in the ranks of the Peronist Party."

In its profile of the former Argentine president, Mexico's El Universal newspaper describes him as a controversial politician:

"Controversial, daring, energetic and authoritarian - Kirchner is perhaps the politician who accumulated the most power since the days of Juan Peron. In its way, questionable or not guarantee good governance. The entire political spectrum in now unclear and the consequences of his death are still in the realm of the unknown."