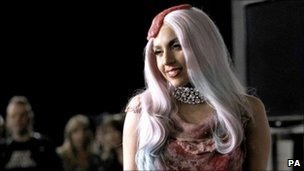 On Tech Brief today: Mixing pop and politics, and how money can make your computer chip run faster.

• Singing, dancing, wearing meat: Lady Gaga generates debate no matter what she does. Of late she has been actively encouraging discussion by exhorting her 6.3 million followers on Twitter to lobby the US Senate over its "Don't Ask, Don't Tell" policy which bans gay soldiers from being open about their sexuality. Judy Breck at SmartMobs ponders if this will change politics:

"It seems to me that the 6.3 'lil monsters' are unlikely to act much as a mob, either a smart or dumb one. They are... receiving a request from the person at the top about whom they are gaga. She hopes they will individually call their representatives in Washington."

• If you think your computer is running a bit slow, Intel might be able to help. The chip giant is selling upgrade cards for some of its processors that, on payment of $50, will unlock some of the hidden power of that machine. In PC Pro Barry Collins says this move is unique:

"Chip manufacturers routinely handicap processors to differentiate between different products. Sometimes imperfections in the manufacturing process are exploited to, say, offer a cheaper processor with only three functional cores instead of the normal four. At other times, processor speeds are artificially capped using BIOS settings, for example. However, this is the first time a company has charged consumers to unlock the full potential of their processor."

• Not everyone is happy with Intel's decision. Cory Doctorow at Boing Boing is rather exercised about the idea of a company charging you to do more than the basics with their wares:

• Cyber-criminals can be a confident bunch. Especially those who set up fake Facebook accounts in the name of Ronald K Noble - one of Interpol's police chiefs. John Dunn at Network World reports that impersonators used the accounts to get intelligence about who was being targeted by Operation Infra Red:

"Although Facebook itself wasn't compromised in any way, the example cited by the Interpol head hinges on the ease with which the criminals were able to forge his identity without challenge. This is a problem both Facebook, and that other giant of social media, Twitter, have been grappling with."

• The five billionth picture was posted on photo-sharing site Flickr over the weekend. It was a snap of the Woodward's building in Vancouver taken by Aaron Yeo. Hans Kullin at Media Culpa looks at how Flickr is matching up to Facebook.

"Despite the fact that social networks like Facebook have become popular places to share photos, it seems that the growth of Flickr continues at the same pace as during the last 3 years, adding about one billion photos per year. (Facebook claims that users uploaded 2.5 billion photos per month, in February 2010.)"