Daily View: The Pope's remarks on atheism and Nazis 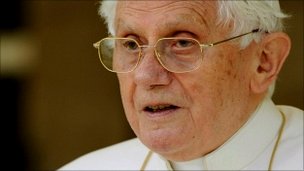 Commentators dissect the Pope's speech in which he appeared to associate atheism with the Nazis.

"The notion that it was the atheism of Nazis that led to their extremist and hateful views or that somehow fuels intolerance in Britain today is a terrible libel against those who do not believe in god. The notion that it is non-religious people in the UK today who want to force their views on others, coming from a man whose organisation exerts itself internationally to impose its narrow and exclusive form of morality and undermine the human rights of women, children, gay people and many others, is surreal."

Meanwhile, the Catholic blogger Paul Mallinder says on Catholic Whistle that he is grateful about the criticism of atheism:

Bryan Cones worries in US Catholic that the comment may create enemies:

"I suppose that's one way to skin the secular cat - and the pope is right about Nazism - but I doubt very much that the pope reached beyond the believing choir with his strong words. In fact, I think he may have further hardened them, since some atheists might have thought B16 was comparing them to Nazis. Even the usually genial Cardinal Walter Kasper had similarly tough language for secular Britain and its prominent atheists. [...]

"Christiainity isn't a head trip; it's a way of life. I think we should be showing rather than telling (off) those who do not believe what a beautiful thing a life of faith and can be. "

The provost of Glasgow's St Marys Cathedral, Scottish Episcopal Church, Kelvin Holdsworth turns his focus to the criticisms made by atheists of religion:

"That comparison is just not on. It's specious and weasly. Atheism does not lead to Nazi tendencies. No more does Christianity make people automatically virtuous. It is an ugly polarity to set up and I'm disappointed to hear a case for it made in public by the Pope. Of course, it's not that far rhetorically from the contrary position of Dawkins, who appears to believe that tyranny is the consequence of faith and that virtue is the consequence of atheism."

Andrew Brown argues in the Guardian that the Pope wasn't talking about today's atheists:

"We're not used to Germans coming here to talk about the war, so many people have jumped to entirely the wrong conclusion about Pope Benedict's attack on atheist extremism. He didn't mean us. He didn't even mean Richard Dawkins. He was talking about the Nazis, who, he said 'wished to eradicate God from society and denied our common humanity to many, especially the Jews, who were thought unfit to live.'

"The atheist tyrannies of the 20th century did kill millions of people, many of them for their Christian beliefs. For Benedict, that is one of the main lessons of modern history."

In the Telegraph Tom Chivers points out a link between Christianity and Nazism:

"I am not saying the horrors of Nazism were the fault of Christianity. That would be idiotic. They were the fault of Hitler and his coterie, of the political thinking of the time, of the propensity for humans to get swept up in the madness of crowds, of the economic collapse of the Weimar Republic, and, yes, of too many ordinary Germans. But to blame atheism for them is not only idiotic in exactly the same way, but demonstrably wrong: Hitler, and most Europeans of the time, were Christian, and doubtless many thought (wrongly; we can all agree that) that they were doing God's work."

In the Independent John Rentoul says the order of the words makes all the difference:

"He could have said 'extremist atheism', which would have been wrong and stupid, as you cannot not believe in something in an extreme way.

"Instead, he said 'atheist extremism', which was simply malevolent, trying to slur atheism by association with Nazism, of which it was an incidental and irrelevant feature."