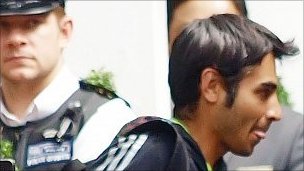 The News of the World's claim that Pakistan bowlers threw delivered three no-balls to order for a betting scam gets commentators talking about the significance of the story.

Omar Waraich speculates in Time magazine that it comes at a time when Pakistan wants an advantage over England:

"The test-match series against England held special appeal for many Pakistani fans. When British Prime Minister David Cameron accused Pakistan of 'looking both ways' on the export of terrorism in the region while on a visit to India last month, the nationalist-minded among them hoped that revenge would be exacted on the cricket field. And when news channels could relay only the misery of those whose lives had been swept away by the floods, cricket became an attractive distraction."

Mustafa Qadri explains in the Guardian why he thinks cricket is so important in Pakistan:

"In Pakistan, we are generally averse to public displays of hedonism, except when it comes to food (in private, of course, all bets are off). But success, or failure, in cricket provides most Pakistanis with an opportunity to express themselves in ways that would normally risk censure. When our cricket team wins, people literally dance on the street. When they lose, the effigies start burning.

"The hot and cold of public affection breeds a certain kind of fatalism in our elite athletes, not to mention the super-rich. When the going is good, squeeze every ounce of good fortune lest it run out tomorrow. That attitude has a lot to do with the poisonous tolerance for match-fixing that has engulfed Pakistani cricket since the 1980s."

"The Fraud Act 2006 added the offence of fraud to the list of criminal offences covered by the Gambling Act 2005.

"If the police feel they have enough evidence, players and anyone else involved can be charged with fraud. A prosecution on conspiracy to defraud charges would need to show evidence that the protagonists on the field had contact with a fixer and profited from the enterprise.
"Any evidence gathered by the News of the World would, in principle, be admissible in court. But because there is no suggestion that the News of the World placed any bet on the back of the deal, and so no bookmaker was defrauded, it makes establishing a complete case harder."

In the Independent Nick Harris dismisses the story as manufactured:

"The 'wrongdoing' - three no-balls - was actually 'bought' by the NOTW for £150,000. This wasn't for any actual betting coup, as erroneously reported in some places, but to show that large amounts of cash might persuade players to make errors, however inconsequential.

"The events splashed over Sunday's NOTW were manufactured by the paper to make this point. It may have been done with noble intention - to highlight that cash can influence cricketers' behaviour. Yet the conceit that anyone could profit by massive sums from individual no-balls is not substantiated by any credible evidence."

In the Times Mike Atherton explains [subscription required] that the bet News of the World would have set up can't be made:

"The only bookmakers who offer markets on elements of the game open to so-called micro-manipulation are those in India, where bookmaking is illegal and designed to avoid tax and service the black market. You wouldn't get a price on Mohammad Amir bowling a no-ball in his third over at Ladbrokes."