Commentators discuss the war in Iraq after the last US combat brigade left Iraq on Thursday.

In the Independent Robert Fisk is skeptical about the validity of the departure: 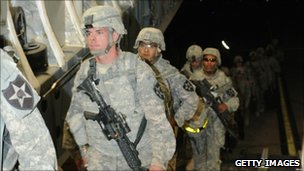 "They are leaving behind 50,000 men and women - a third of the entire US occupation force - who will be attacked and who will still have to fight against the insurgency.

"Yes, officially they are there to train the gunmen and militiamen and the poorest of the poor who have joined the new Iraqi army, whose own commander does not believe they will be ready to defend their country until 2020. But they will still be in occupation - for surely one of the the 'American interests' they must defend is their own presence - along with the thousands of armed and indisciplined mercenaries, western and eastern, who are shooting their way around Iraq to safeguard our precious western diplomats and businessmen. So say it out loud: we are not leaving."

In Washington Monthly Steve Benen marvels the speed of the withdrawal:

"With tens of thousands of troops, and many more private contractors, still in Iraq, anyone who thinks this is 'over' is mistaken.

"But it's hard not to feel some satisfaction about today's milestone anyway. As recently as March - just five months ago - there were more than 140,000 U.S. troops in Iraq, many of them serving multiple tours. This morning, there are 50,000, and none of them is serving in a combat capacity.

Juan Cole argues in the blog Informed Comment that just because it isn't entirely accurate to say US troops have left Iraq, doesn't make the move meaningless:

"It is a little bit immature to demand an all or nothing military situation. What Obama has done is stay true to US commitment to get combat units out by September 1. That should reassure Iraqis - and Arabs and Muslims in general - about US intentions.

"That consideration is the true significance of Thursday's last convoy. It is a symbol of a turnaround in US policy, a repudiation of the Bush administration doctrine of preemptive war. 'Preemptive war' is a euphemism for the rehabilitation of aggressive war, which the world community attempted to abolish in the United Nations charter."

Roula Khalaf argues in the Financial Times [registration required] that the Iraqis have little to celebrate about the US withdrawal:

"True, the civil war that threatened to tear Iraq apart has abated. Iraqis have adapted to living with the lower levels of daily violence that still bedevil parts of the country. Thanks to their newfound democratic freedoms, Iraqis can think and say what they want; they can vote in elections; and they can join political parties. But they are neither comfortable with their present nor secure about their future."

Ex-ambassador to Iraq from June 2004 to April 2005 John Negroponte says in Foreign Policy that the US needs to keep a relationship with Iraq:

"Too often in the past we have tired of an international undertaking when our military role has finished and 'our boys have come home.' We should not underestimate the effect that a continued demonstration of interest and concern can have on Iraq's future. It is important that not only Iraq but the region as a whole understand that this long-suffering country continues to enjoy strong American support. A properly endowed U.S. government civilian presence in Iraq can help preserve the gains of the past seven years and help avoid a repeat of the instabilities of the past."

The Daily Mail calls the war shameful, without any winners:

"Meanwhile, the reputations of President Bush and Tony Blair - our own warmongering leader, who lied about Saddam having weapons of mass destruction - are in ruins...

"No, the departure of the last Allied combat troops from Iraq was not a victory parade. It was an ignominious end to an equally ignominious and almost certainly illegal military adventure."

The director of the Iraqi Association, a charity for Iraqi refugees in Britain
Jabbar Hasan says in the Mirror that the Iraq war was worth it:

"There are now hundreds of newspapers and magazines available on the streets of Baghdad and other cities. This is something that has not existed for 50 years. Before the war there were restrictions on communications. Now Iraqis can enjoy satellite television and can surf the internet. There are web cafes everywhere now. There is a much better quality of life.

There is real hope for the first time. I would like to live there in the future, in fact. I am even thinking of retiring there with my family."

In the same article, an anti-war campaigner whose soldier son died in the war, Rose Gentle disagrees:

"Iraq was no threat to us whatsoever. So why invade? What gives us the right to go and take over another country? We are all aware Saddam Hussein was a bad person. So we were supposed to be improving the lives of the Iraqis. But life in Iraq hasn't got any better. It's got worse. Nothing has been achieved there which is very disappointing. There is still no stability despite thousands of innocent Iraqis being killed during the war."