Commentators discuss how BP and the US government are responding to the BP oil spill. 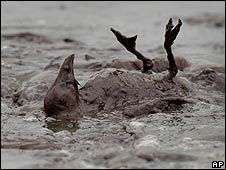 The Guardian editorial compares the handling of the BP oil spill has to the Bhopal disaster:

"What is going on in the Gulf of Mexico today is an example of Newton's third law of motion: for every action by BP there is an equal and opposite reaction by the federal government in Washington. The result is that BP is, rightly, being held to account for cleaning up the biggest oil pollution in US history. But just imagine if the blowout on the drilling rig had caused not 11 but up to 25,000 US deaths; that the compensation Washington finally accepted fell far short of that required even to cover the medical bills of the survivors; that 26 years on , BP had still to clean up the site of the accident which was poisoning the local water supply; and that Britain refused to extradite to a US court the main BP executives responsible.

"Unthinkable? Well, that is how the US multinational Union Carbide Corporation, now owned by Dow Chemical, has behaved since it created the world's worst industrial disaster at Bhopal in central India. The difference between BP and Union Carbide is not just a matter of the location of the disaster, although it is plainly that too. It is also down to the fact that successive national and state governments in India have rolled over time and time again to the realpolitik of dealing with Dow Chemical's other investments in India."

George Monbiot argues in the Guardian that BP should not see the money it makes as profit for its shareholders but instead as provision for future liabilities:

"Pollution has been defined as a resource in the wrong place. That's also a pretty good description of the company's profits. The great plumes of money that have been bursting out of the company's accounts every year are not BP's to give away. They consist, in part or in whole, of the externalised costs the company has failed to pay, and which the rest of society must carry."

"Traditional responses won't work. In fact, there are no words BP can use to apologize sufficiently for the damage the leak has caused. Whatever it says, it's still going to be the most reviled company in America.

"Instead BP should try a different tack. It should tell the U.S., and everybody in it, to go take a hike. In reality, the U.S. is guilty of the most appalling hypocrisy. It's too late to rescue BP's reputation now; all it can realistically hope for is to salvage as much money for shareholders as possible."

On MSNBC, Countdown with Keith Olberman's political analyst Richard Wolffe argues that the
Louisiana Republican governor wrote to the White House to rethink its current ban on offshore drilling because he cares more about the economy than the environment:

"So what ought to be a teaching [and] learning experience about the true cost of this business is wrapped up in the local needs of these economies which clearly Jindal is pandering to rather than taking a leadership position."

Rachel Maddow says on her MSNBC show that if the oil industry doesn't change, it shows the US political system is not working:

"You can diagnose whether we have a functioning media in this country by whether or not the country understands that this is a vile and environmental mega-disaster.

"You can diagnose whether we have a functioning political system in this country by whether or not the results of this mega-disaster is change.

"Big oil has been too rich too care about what it was putting us all at risk for. And we've been too cowardly to change direction and break free from that."