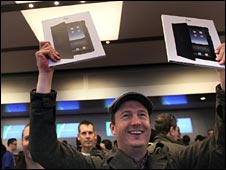 On Tech Brief today: reports suggest Google could be on the brink of joining the tablet party, Facebook answers questions about privacy, Orange and T-Mobile rebrand and Mozilla says goodbye to a long-serving member of the open source community.

• When the tech rumour mill turns, Apple is usually in the mix somewhere and the latest gossip is no exception, throwing in heavyweight Google for good measure. Verizon chief executive Lowell McAdam reportedly told the Wall Street Journal that Google is working with US network Verizon to develop an iPad rival:

"We're working on tablets together, for example. We're looking at all the things Google has in its archives that we could put on a tablet to make it a great experience."

• Another tech heavyweight social networking site Facebook has been busy answering questions posed by readers of the New York Times.

Privacy was unsurprisingly top of the agenda with many angry that Facebook seems unable to stop fiddling with its settings.

"We know that changing Facebook - something people have demonstrated is important to them - can be unsettling. But we're always trying to be better and do more for our users. Clearly, we need to rethink the tempo of change and how we communicate it. Trust me. We'll do better."

If he isn't true to his word Tech Brief predicts that he might have another sort of demo on his hands.

• Don't you just love a good name change? T-Mobile and Orange have merged to create the biggest mobile firm in the UK. While Tech Brief would have thought Mobile Orange or Orange T were perfectly good names for the new company, these simple monikers have been rejected in favour of the more grandiose Everything Everywhere.

The Register reports that they picked the domain name for a bargain price from IT consultant Ted Kelly. A somewhat miffed Mr Kelly told the Reg:

"I'm a little shocked to see the news today... coincidentally, the day that this modest sale was completed! It seems that it was bought by 'an agent' who kept very quiet about the intentions for the domain. It was therefore acquired for a very nominal sum."

So, for Mr Kelly it is back to the drawing board for new lucrative domains. Maybe he should turn his attention to the new Googlepad.

• John Lilly, the popular boss of open source software foundation Mozilla is stepping down after five years in the job. He will remain at the firm until a replacement can be found but then he will move back into his old role as a venture capitalist. With Mozilla now reaching out to nearly half a billion people around the world, many of his fans will be eager to see what new start-ups he puts his money behind.

In his blog Mr Lilly writes

"I'm incredibly proud of the work we've done over the last several years, and very optimistic about what the future holds."

• And finally, with 3D the buzz word of 2010 it wasn't going to be long before the adult entertainment industry jumped on the bandwagon. CNN reports a 3D centrefold is due in the June issue, after Hugh Hefner decided that a naked lady is probably what people would most like to see in 3D. Proving himself to be an early adopter, Hefner first had the idea for 3D centrefolds back in the 1950s but rejected it when he found out how much it would cost.

Don't get your 3D glasses steamed up, boys.

• John Lilly's blog | What's next for me