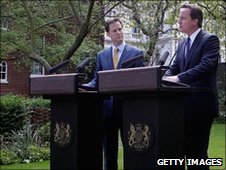 Commentators consider the dynamic between David Cameron and Nick Clegg.

Quentin Letts says in the Daily Mail the announcement of the coalition was lacking in policy but revealed an interesting aspect of their relationship:

"The power posing was a whole sub-plot in itself. Mr Clegg stood away from his lectern, perhaps to look independent. He snaked an arm round Mr Cameron as they concluded the event.

"This is an old trick, a way of projecting yourself as the senior partner. But Mr Cameron did most of the talking and, being a little chunkier, probably won the gravitas contest. He is the PM, after all, and three months older. Mr Clegg's yellow tie needs to go. It makes him look washed-out. Mr Cameron tans more easily and his voice is smokier."

In the Guardian Polly Toynbee is not alone in comparing the coalition to a civil partnership:

"In the spring garden the Clegg-Cameron civil partnership looked magnificent, the two men perfectly cloned in face, age, education, accent and style. Naturally the audience of cynical hacks from all sides of the political spectrum came away shaking their heads. Bets were laid, jokes made, the wedding gifts would soon be on eBay and it would all end in tears.

"But there was too much wishful thinking in the air from ill-wishers yesterday. The right will hiss and spit from David Cameron's back row - and with good cause. Look hard at the agreement and the bitter truth Labour must swallow is that much here is more radical than their own manifesto."

Christina Patterson says in the Independent that David Cameron and Nick Clegg came across as consensual and civilised - which she finds depressing:

Conservative political blogger Iain Dale blames the media for his feeling of boredom about the Cameron-Clegg relationship:

"Cameron and Clegg seem totally at ease with each other. Their body language is very good and yet the hacks still ask the same tired old questions. Boring, boring, boring. If all journalists want to do is ask smart arse questions about some apparent disagreement on policy which took place five years ago, Cameron and Clegg may well decide such press conferences are a complete and utter waste of their time."

The Telegraph editorial expresses optimism about the relationship:

"It is obvious that, so far, Messrs Cameron and Clegg are getting on famously, and it also seems that the Tory and Liberal Democrat negotiating teams found their talks surprisingly friendly. Whether that warmth will percolate downwards to the lower ranks of both parties remains to be seen. There is certainly no reason why the chemistry should not work on a personal level - not least because of the old political saw that while your opponents are in the other parties, your enemies are in your own. The Blair/Brown feud proved how debilitating that can be."

Former Tory MP Gyles Brandreth tells the BBC News channel that "this is the day of the wedding and I'm still celebrating the marriage":

"The confetti is flying everywhere as far as I'm concerned. Having a lot of gay friends, I've been to quite a number of gay weddings and this afternoon's press conference was to me a dead ringer for an open-air civil partnership.

"To see the two handsome boys there, side by side, was really rather touching. But I'm not going to be cynical about it. I think they've gone into this committed to make it work. What happens down the road is quite another matter. The new government chief whip is Patrick McLoughlin [and] I suppose he's going to be like the Relate counsellor in this relationship...

"There may well be some very tense moments, and those whips are going to have to do some pretty serious counselling. But for today, I'm feeling celebratory. I can just picture them upstairs in No 10, in the flat, in the Morecambe and Wise bed. There they're going to be, Dave and Nick, sitting side by side. It's a pretty picture."