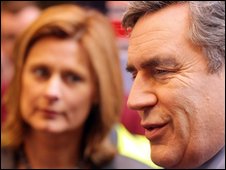 Commentators make their judgements of the Labour manifesto.

Julian Glover argues in the Guardian that the document is meaningless:

"The manifesto is like one of those quadratic equations GCSE pupils are forced to learn at school, an empty space whose contents you must deduce from other factors. In this case, those two factors are Labour's claim to a pure moral purpose, multiplied by the party's strongly held belief that the Conservatives are inherently nasty. The result of these simplistic calculations is a they-are-bad-so-we-must-be good manifesto."

In the Telegraph Richard Fletcher complains that the manifesto lacks any detail on spending cuts or increasing tax:

"It may be fashionable for politicians to talk tough about public spending and fiscal discipline, but unfortunately there is little chance of them moving beyond soundbites, and debating ahead of the election the hard choices that will have to be made once it's all over."

"There is a sensible, left wing idea here, building on what has already worked well. This is the idea that at times when unemployment is rising, the government should make funding available to create new jobs. Offering every unemployed person the opportunity of a job, which helps to build their skills, do something useful, and increase their confidence, is a valuable investment which is better than just paying benefits and sending people on training courses."

The Daily Mail editorial calls the manifesto "mired in the past":

"But most depressing of all is the manifesto's failure to offer any dynamic vision for the future, or explain how today's great social problems will be solved.
Just what is Labour going to do about the endless stream of immigration that, as the Mail graphically revealed on Saturday, is beginning to destroy cities such as Peterborough? What are they going to do about the growing imbalance between the state and private sectors, and the millions of Britons being subsidised to stay at home while foreigners fill the jobs they do not want?"

Kevin Maguire in the Mirror thinks that the hospital setting sent a positive message:

"Brown today was relaxed, the jokes were natural and he accepted pointed questions were legitimate. Even the cartoons are good... The message was clear - public services will be safer under a Labour Government committed to renewal. Since the Tories are jumping up and down about Brown, I'll remind them of another politician who used the existing Queen Elizabeth Hospital for campaigning last week. The name of the political rotter? David Cameron."

In the Channel 4 news blog Faisal Islam points out that launching the manifesto at a brand-new privately-financed hospital was appropriate, but maybe not in the way Gordon Brown intented:

"There will be thirty theatres, the largest critical care unit in Europe, and a helipad for the war-wounded. A monument to New Labour, possibly opened in a new Conservative era.But it's also the second largest PFI hospital.
That means a hospital that is worth £627m will cost a stream of payments starting at £47m this financial year, going up in cash terms every year for 35 years stretching all the way to the last payment of £108.8m in 2044/45."

Jackie Ashley claims in the Guardian that the Labour manifesto must have been written by Ed Miliband, and speculates about his future as the Labour leader:

"Will it, in the end, help propel Ed Miliband towards the Labour leadership? There are still doubts over whether or not he really wants it, and certainly he's unlikely ever to stand against his older brother David. But what Ed Miliband has shown today is that he is capable of telling a Labour story that all wings of the party can support. And it's that ability - to unite Labour's warring factions - that might, just might, bring Ed Miliband the ultimate prize."

By contrast, the Telegraph editorial calls the manifesto Blairite:

"New Labour became hooked on higher taxes and higher spending, as all Labour governments do, and is finding the process of withdrawal impossible to cope with. There was no alternative philosophy of government produced yesterday - there was no vision. Instead, there was a programme whose sole, uninspiring motivation is to try to cling on to office. We suspect even die-hard party activists will struggle to find anything to put a spring in their steps."

In the Guardian Polly Toynbee thinks the manifesto is not Blairite, instead calling it bold and persuasive:

"Voters may not follow the details, but they can smell a rat. Labour's manifesto is a good reminder of the real choice, that same old choice as ever - Tory tax cuts or protecting public spending. Labour is fired up with a new anger at what Cameron would do."

Steve Richards | Independent | What sort of change do voters want

Daily Mail | A Labour manifesto mired in the past

Independent | A less than convincing manifesto for a fourth term

Guardian | Labour: Progress on the cheap

Philip Stephens | Financial Times | Britain is arguing about the past

Philip Cowley | Election blog 2010 | Out with the new, in with the old