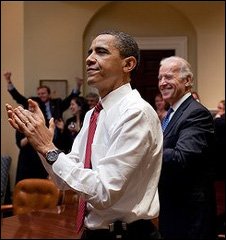 US commentators have been by turns relieved and outraged by the passage of the healthcare bill, reforms on which Barack Obama had staked his presidency.

Writing in the Huffington Post, Robert Kuttner says Mr Obama's victory is a coming-of-age moment for the president:

"It has taken more than 14 months for Obama to vindicate as president the leadership potential that we saw on the campaign trail; fourteen months to give up on the fantasy of bipartisanship; fourteen months to start truly inspiring ordinary people as he did as a candidate. But in the springtime of March 2010, we have seen a president who evidently has learned how to lead, who relishes winning, and who is primed to become a more effective progressive. For that we should be grateful. It should whet his appetite as a fighter - and ours."

The New York Times sees this as the beginning - and not the end - of the healthcare reform:

"Just as Social Security grew from a modest start in 1935 to become a bedrock of the nation's retirement system, this is a start on healthcare reform, not the end. A lot will depend on whether future presidents and Congresses stick to the savings and deficit targets set in this legislation; on how aggressively states administer the new exchanges; on how healthcare professionals and institutions respond to the challenge of changing their ways; and on how the public responds to the mandate that everyone obtain insurance or pay a penalty.

Our hope and belief is that this reform will in the end accomplish its great objectives. Right now, the good news for all Americans is that despite all the politics and the obstructionism, the process has finally begun."

James P. Pinkerton meanwhile, writing on Politico sees this victory as a short-term gain for the Democrats, which could cost them dearly in the longer term:

"Once again, the big issue is abortion. And while the happy-day-are-here-again headlines will be playing big in the Mainstream Media in the wake of the House healthcare vote, the cold reality is that once again, Democrats have chosen a politically risky course, which will likely further alienate them from the center-right majority in the country.

This is a view shared by Tunku Varadarajan, blogging in the Daily Beast who labels it a "Pyrrhic victory":

"So the Democrats have a healthcare win in the House - a win that could prove mighty Pyrrhic. It will cost them dearly in the midterm elections; and come 2012, the remarkable man who seemed a shoo-in for a second term at the time of his first inauguration, will stand every chance of losing to any half-decent candidate the Republicans can muster. And in truth, this remarkable man, who has collapsed in stature since the day of that first, stirring inauguration, will have wrought his own eclipse."

The Los Angeles Times sees the battle in its historical context:

"The House vote Sunday to send a comprehensive healthcare reform bill to President Obama's desk put the United States on a path toward universal health insurance, a goal that had eluded reformers since then-presidential candidate Teddy Roosevelt called for all workers to have coverage in 1912. It may prove to be the signal accomplishment of Obama's administration, even though the controversy surrounding it threatens to end his party's majority in Congress. Rarely has such a good thing for Americans been perceived by so many as a threat to their livelihood and liberty."

While, for David Corn, writing in Politics Daily the passions raised by the reforms mean anger will linger long into the future:

"The clash over health care reform has been too intense for it to subside, even after a bill is passed. (Shortly before the House vote, Rep. Paul Ryan, a Wisconsin Republican, suggested that passage of the bill would lead to the downfall of the United States.) In some ways, this battle has been a continuation of the heated political culture wars of the 2008 campaign. The passions that fuelled both are not going away, and there will be two sides to this spinning coin [...] As the never-ending healthcare debate enters a new stage, the opposing camps must now argue about what is, rather than what will be."

Mike Madden, commenting in Salon, points out that however loudly the Democrats celebrate what the bill represents, there is still plenty missing:

"Some progressive priorities were glaringly absent - there's no public option, nothing remotely approaching a single-payer healthcare system. There isn't even a mandate that employers provide insurance for their workers, only a fine charged to companies whose employees get federal subsidies to buy their own coverage. It had the backing of the drug manufacturers, the hospitals, the doctors, all the major industries involved in providing healthcare in America except the insurance companies. And even insurers will wind up making billions of dollars, as millions of Americans suddenly get access to their products."

Victor Davis Hanson, on Pajamas media, thinks Obama's efforts to transform healthcare will be just the beginning of a slippery slope:

"Obama has thrown down the gauntlet, and is trying to reify the sloganeering of the 1960s. He apparently reasons along the following lines: that centrist talk was campaign fluff; the voters fell for it, and now it's his turn to remake America with 51% of the House and 44% of the people. Think Sweden, or, better, Greece as our model at home, and something like America as Brazil in matters of foreign policy. Apparently, Obama figures that people now may not like the present partisanship, but they didn't like FDR at the time either. Yet whom do they associate their Social Security checks with? Hoover? Coolidge? Harding? I don't see why the ram-it-through, healthcare formula won't be followed by similar strategies for blanket amnesty, cap and trade, and expansions of the state takeover of cars, banks, student loans, and energy."

Writing with a pinch of salt for the National Review, Mark Steyn suggests that the sheer cost of the healthcare reform will end up having a direct - and negative - impact on America's global standing:

"It's [...] unaffordable. That's why one of the first things that middle-rank powers abandon once they go down this road is a global military capability. If you take the view that the US is an imperialist aggressor, congratulations: You can cease worrying. But, if you think that America has been the ultimate guarantor of the post-war global order, it's less cheery. Five years from now, just as in Canada and Europe two generations ago, we'll be getting used to announcements of defence cuts to prop up the unsustainable costs of big government at home. And, as the superpower retrenches, America's enemies will be quick to scent opportunity. Longer wait times, fewer doctors, more bureaucracy, massive IRS expansion, explosive debt, the end of the Pax Americana, and global Armageddon. Must try to look on the bright side..."

Mike Madden | Salon | "On the side of the angels"