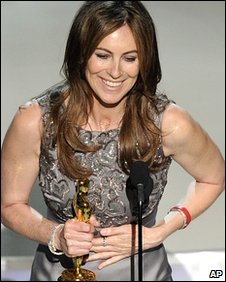 Commentators give their reactions to the 2010 Oscar winners.

Katey Rich in Cinema Blend says the Academy Awards have a history of supporting independent films over blockbusters:

"[I]t's fair to assume The Hurt Locker's triumph over Avatar will be considered the way we talk about How Green Was My Valley topping Citizen Kane, or Annie Hall over Star Wars. The Academy has always moved in mysterious ways, far removed from the desires of the fanboys or the public at large. That's something that no amount of James Cameron whizbang CGI magic can ever change."

Ted Johnson at Variety notes that the ceremony remained apolitical despite the controversial subject matter of some of the films:

"This seemed to be the year where the winners, Hurt Locker included, kept their mouths shut. There was no Sean Penn speech on civil rights, or quips about Sarah Palin or even references to President Obama. Even Mo'Nique's reference to the politics surrounding Precious was very fleeting: You'd have to be a pretty close awards season observer to even know that there has been a flap about the movie's portrayal of African Americans in the slums."

Reed Johnson in the LA Times says the first woman to win best director and the first African American to win the writing award are both long overdue:

"The history of the Oscars amounts to a kind of parallel, alternative history of the United States. One question, perhaps, is why an art form that ostensibly reflects our life and times has so often lagged years or even decades behind evolving social realities. Time will tell whether last night's recognitions were harbingers of change or exceptions that prove the rule."

Brian Moylan at Gawker reckons that the wins for Hurt Locker and Precious were no surprise:

"All the pundits had been picking these as the winners for weeks now. Snore. The only race to have a bit of heat was between Meryl Streep and Sandra Bullock for Best Actress, a prize that Sandy B took home for The Blind Side."

Mike Hess at Moviefone says the ceremony itself dragged on, which wasn't helped by the predictability of the winners:

"[W]hen the majority of the big awards are no-brainers, something's gotta give when it comes to the show format to keep people interested. The Academy shouldn't be faulted for the fact that the Big Four were locks, it's just that they surely could have done something to spice up the remainder of the show."

Mike Hess | Moviefone | Decent, but what a drag