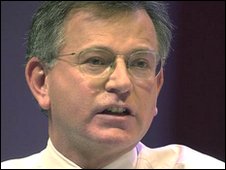 Commentators assess the damage done by a Channel 4 and Sunday Times investigation where ex-cabinet ministers were secretly filmed apparently offering to try to influence government policy in return for cash.

The Sunday Times editorial says the revelations could have a lasting effect:

"This expose reveals that even after the expenses scandal the gravy train is still steaming around Westminster and Whitehall... The government, however, cannot convincingly distance itself from this. The original 'cash for questions' investigation by this newspaper, 16 years ago, helped to hasten the end of a Conservative government plagued by sleaze, division and incompetence. History may be repeating itself."

"All three are former Labour Cabinet ministers. All three are disciples of Tony Blair. They are the true Heirs to Blair. Why shouldn't they get a little honey on their snouts when the leader they followed is using his contacts to wallow in it, buying a multi-million pound portfolio of properties and raking in an estimated £20 million?"

Peter Preston at the Guardian says 16 years on from the cash for questions scandal, MPs didn't react to the sting as badly as they could have:

"Try examining yesterday's Channel 4/Sunday Times exercise in the kindliest light. Not all of the MPs approached by a phoney PR company took the bait. Nobody did anything illegal. Some responses were more pathetic than menacing. Margaret Moran - on her way out after the expenses debacle - offered to ring up a 'girls' gang' of MPs to push an appropriate cause. Geoff Hoon confessed wanly: 'I've got two children at university, so I've got to get a job.'"

The First Post looks at what effect the investigation will have on the election:

"It's not a total disaster because all three ex-ministers are Blairites, two of whom - Hoon and Hewitt - were even involved in the abortive coup to replace Brown with David Miliband back in January. Little wonder that Miliband was one of the more vociferous members of the government yesterday, telling Sky News he was appalled by the Sunday Times revelations."

"Mr Byers has long been a hate figure in Brownite circles. There is a familiar mafioso feel of scores being settled in the traditional manner about the whole affair. The Sunday Times was undoubtedly read with far more glee than grief in Downing Street yesterday."

The Independent editorial looks at how the parties are responding to the problems of lobbying in their manifestos:

"The Conservative leader, David Cameron, has proposed extending this to two and tightening up the penalties for rule-breaking. We doubt, though, whether even this will be enough. Labour says it will include proposals for a statutory, rather than voluntary, register of lobbyists in its manifesto. The case has now been more than made, and it should not apply only to ministers. Voters are entitled to know whose interests, in addition to those of their constituents, an MP may be representing."

"I wasn't surprised to hear Labour suddenly announce a manifesto commitment to 'clean up lobbying' yesterday. It was a classic diversionary tactic, designed to deflect attention away from the fact that several of their MPs have apparently been caught with their hands in the cookie jar."

Daily Mail | Parliament sinks ever deeper into the mire