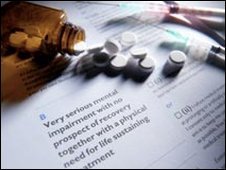 The Independent's editorial considers the possibility that clarifying the law will do more harm than good:

"Even campaigners who have backed Ms Purdy privately fear that the clarified law could backfire by making it more likely that prosecutions will be brought. Equally, there are dangers in reversing the presumption that aiding someone to end a life prematurely is a bad thing. The law is a blunt instrument for deciding such delicate issues. Whatever it says, the wise exercise of discretion will be critical."

Debby Purdy's lawyer Saimo Chahal says in the Guardian she welcomes the new guidelines but sees some loopholes:

"Given the new guidelines on assisted suicide, we must ask if the law of murder is too inflexible and whether we should look now at making a distinction with mercy killing."

The bishop of Swindon Rt Rev Dr Lee Rayfield says in the Guardian that English bishops are united against the legalisation of assisted suicide:

"I very much hope that Keir Starmer's guidelines will be recognised as providing the nuance and discretion needed for our social and moral wellbeing and steer us away from the road to legalising assisted suicide. If we want to build a society which majors on compassion and care, which supports those who are dying or fearful of growing infirm and a burden, there are far better roads for us to travel."

The terminally-ill author Terry Pratchett has been campaigning for a tribunal to be set up to help those with incurable diseases end their lives with help from doctors. In the Times he says the DPP's guidelines are good:

The Times editorial says the debate is not over but calls the amendments a "form of wisdom":

"Parliament should return to the issue because the only way to weigh this consideration against the rival moral imperative of the right to dignity in death is to continue the debate. But surely, for today, the verdict of Sarah Wootton, chief executive of Dignity in Dying, is the correct one. The new framework is not the end of the argument but it is a 'victory for common sense and compassion'."

The Telegraph editorial says the changes were made through the judicial back door and should go through parliament:

"Assisting suicide remains against the law of the land; but it is Mr Starmer who has now decreed when and where it will apply. That should have been for MPs to decide - though there has always been discretion for prosecutors to discontinue court cases, either in the public interest or where there is no realistic prospect of conviction."

Independent | Clarity in the law is not always for the best

Terry Pratchett | Times | Some compassion in the assisted dying debate

Times | A form of wisdom

Telegraph | Right-to-die laws are a matter for Parliament