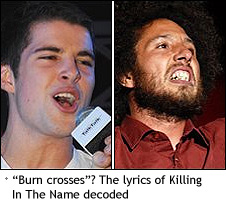 The campaign to stop X Factor winner Joe McElderry from claiming the Christmas number one has divided music critics and fans alike. At the time of writing, Rage Against The Machine's expletive-laden 1992 single Killing In The Name, is ahead by several thousand sales.

But Fraser McAlpine, writing on the BBC Chart Blog, takes issue with the motives behind the campaign, launched on Facebook three weeks ago:

"It strikes me that there is a nasty streak of snobbery to the Rage Against The Machine campaign, because essentially the people behind it not only don't approve of the song the X Factor has made - before they have even heard it, which is always lovely - but they don't like the people who DO like it. They think these people are easily-led. They may use words like 'sheep' or 'masses' or 'plebs' or 'chavs', and they believe themselves to be above such obvious mind-control."

Picking up the baton, NME critic Luke Lewis calls the protest a "huge waste of everyone's time and money" - and goes on to suggest its supporters are trivialising Killing In The Name's political message:

"Rage Against The Machine wrote the song about the racism deeply embedded in American society - the police officers who "burn crosses" are closet members of the Ku Klux Klan. You can't imagine [lead singer] Zack de la Rocha - a man so committed to leftist social activism he has worked closely with Mexico's Zapatista National Liberation Army, and once declared US Presidents should be shot as war criminals - would be too delighted to discover his howl of anti-establishment rage had been co-opted by a bunch of bored Brits on Twitter."

There are better singles to back if you want to strike a blow against Simon Cowell and his record label, SyCo, says Peter Robinson on the Popjustice website. In particular, Fifty Grand For Christmas, a song by former X Factor auditionee Paul Holt:

"In case you've forgotten, when Paul Holt auditioned for the first series of The X Factor Simon Cowell told him that if Holt managed to get a Number One single, he'd hand over fifty thousand pounds. So Holt made a song, 'Fifty Grand For Christmas', about the bet. As the lyrics - and this is one of the greatest opening lines in the history of popular song - explain: 'Simon says he'll pay the sum of fifty thousand pounds if I get to Number One.'"

The Guardian's Tim Jonze disagrees. He says a number one for Rage Against The Machine's 20-year-old protest anthem would be a "triumph for pop":

"The song might be old, but having a fan-powered campaign propel it to the chart summit against the might of an entertainment powerhouse like SyCo would tell you more about the democratised, downloadable and downright free-for-all nature of the pop charts in 2009 than anything else."

But were the festive charts ever a safe haven for musical talent? Not really, says the Telegraph's music critic, Neil McCormick. Before X Factor, he reminds us, the Christmas chart crown went to the likes of Bob The Builder and Mr Blobby:

"For the kind of consumer whose interest in music is so shallow they only invest money buying a single at Christmas, Mr Cowell provides the unique service of reducing their choice to whatever his latest talent show is peddling."

Finally, The Sun has a warning from history for Radio One DJ Reggie Yates when he reveals Rage Against The Machine's final position on the Chart Show this weekend:

"The track is unlikely to get much airplay. On its release in February 1993 then Radio 1 DJ Bruno Brookes bungled by playing an uncensored version of it during his Top 40 countdown show. The BBC were flooded by complaints from listeners stunned by the sheer volume of F-words the track contains."

Gordon Smart | The Sun | Middle Of The Road Rage

Alan Connor | BBC News Magazine | What is anti-X Factor song Killing In The Name all about?