This page has been archived and is no longer updated. Find out more about page archiving.
BBC Scotland Homepage
Scotland's Music

We lost one of the most respected and loved drummers and vocalists yesterday when Levon Helm passed away at the age of 71, after a long battle with cancer.

Mark Lavon "Levon" Helm is best known as the drummer and sometimes lead vocalist of The Band. He joined Ronnie Hawkins' group The Hawks and moved to Canada where most of the musicians who were to become known as The Band were recruited (Rick Danko, Richard Manuel and Garth Hudson). Ronnie left and a few years later, when Bob Dylan decided to try his hand at electric music, he asked them to be his backing band. Levon left for a couple of years but returned for Woodstock in 1967 at which point The Hawks became known as The Band and released their debut album Music from Big Pink which included the classic The Weight on which Levon had the lead vocal. The Band broke up in 1976 after their farewell concert which featured in the Martin Scorcese film The Last Waltz. Levon released a few solo albums, and reunited with his former Band members, except Robbie Robertson, in 1983. Richard Manuel committed suicide in 1986, but the other members continued touring and released albums until 1998.

In the late 90s Levon was diagnosed with throat cancer and was unable to sing for a number of years. He began hosting concerts known as the Midnight Ramble from his home in Woodstock New York with musical friends, the proceeds of which helped pay his medical bills. By 2004 he was able to sing again and released his Grammy Award winning album Dirt Farmer in 2007, followed by Electric Dirt which won the very first Americana Album award at the Grammys in 2010.

In 2008 I was fortunate enough to witness first hand Ramble at the Ryman, which launched the Americana Music festival in Nashville. In a packed Ryman Auditorium (a venue in which you can almost feel the ghosts of the country music legends who have graced the stage here over the years), Levon and his musical friends including band leader Larry Campbell, Buddy Miller, Allison Moorer, Steve Earle, Sheryl Crow, Delbert McClinton, Billy Bob Thornton and John Hiatt entertained us with renditions of The Band and Dirt Farmer songs, culminating in an emotional encore featuring a performance of The Weight. It was the highlight of my Nashville trip. Levon looked older than his 68 years but sat behind his drum kit, grinning from ear to ear obviously enjoying the evening as much as the audience. I knew then that I was in the presence of a legend, one that I was unlikely to see perform again (although admittedly I saw him the following evening when he appeared at the AMA Awards show!).

Levon Helm at the 2008 Americana Music Awards in Nashville.

The next day I purchased a copy of his autobiography to find out more about the great man - it's well worth reading if you're at all interested. The Ramble at The Ryman show was filmed and has since appeared as a CD and DVD. The CD was yet another Grammy Award winner for Levon.

Levon's memory will live on through the great songs he's written and performed on and the many musicians he's influenced, but the world of Americana music won't be the same without him. 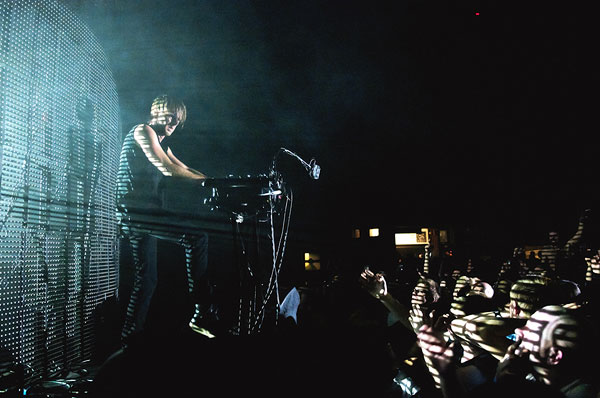 The Plastikman himself emerges for the encore (Photo: MJSFerrier)

For techno lovers of a certain age, the Plastikman Live 1.5 visit to the Barrowlands Ballroom seems like a chance to travel back in time. I last saw Plastikman play here at one of the legendary Pure nights in 1994. The sense of time-warp is heightened by the presence of just about everyone who was in the crowd at that gig, and also because this most atmospheric of venues hasn't changed a jot in the intervening years, bless it.

But I've been primed to expect great things from tonight's show. Richie Hawtin's love of technology means he has made a determined effort to reinvent his minimal Plastikman alter-ego for the 21st century (beware strobing) - hence the 1.5, which suggests further upgrades to come.

By half eight there is already a healthy gathering of dancers whooping it up down the front - that Glasgow determination to get down, despite the early start and the challenging December weather - and there are just as many young faces as veterans. The music is reminding me of my recent visit to Berlin - underground, smooth and minimal. Nothing nostalgic, thankfully: techno is about the future, so the cliché goes. The hall is dark, and lurking centre stage is an ominous black curtain.

The support DJs from Hawtin's M_nus label get the whole crowd properly moving with a decent selection as the famous sprung floor fills up, but finally bring the atmosphere down a few notches to increase the impact of the headline act's entrance. The curtain drops, minimal blips pop out of the massive sound system and we are blinded by the light. This big cylindrical cage is the brightest TV in the world. I've never been particularly impressed by the abstract pattern school of VJing, but the stuff that's happening here takes it to a new level. Hawtin has an army of techies helping him to do it all truly live - everything wired together so he can trigger mega-strobes, patterns and sounds in unison - definitely not just pressing play on a laptop and miming at a mixing desk. Only when the screen goes dark for a second and he's backlit do you catch a glimpse of the wizard at the controls, firing off sequences from his banks of classic analogue and modern digital kit. 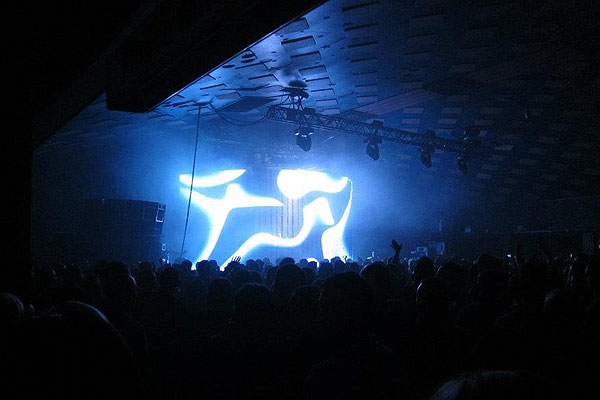 The hall is packed, and looking back at the faces lit by the screen, thoughts of nostalgia evaporate. In 1994 people danced with each other. In 2011, we're all watching a giant TV and filming it on our smartphones. Not that the experience is inferior- just modern. It's a spectacle. The screen is so bright that at times it's almost unbearable, like staring at the sun - meaning it actually looks good on a phone (beware extreme strobing in those Youtube clips).

The recently released complete Arkives box set contains hours of back catalogue, but unlike the current crop of cheesy superstar DJs Hawtin doesn't take the easy route of mixing hits together in the obvious breakdown/build-up/4-to-the-floor format. He picks and chooses snippets, remixing as he goes - again, the live element prevents it from being a nostalgiathon. It's impressive that a heaving dancefloor of 2000 people can be satisfied by such an experimental collection of sounds. There are plenty of pounding moments, though, all the more powerful for taking us by surprise. 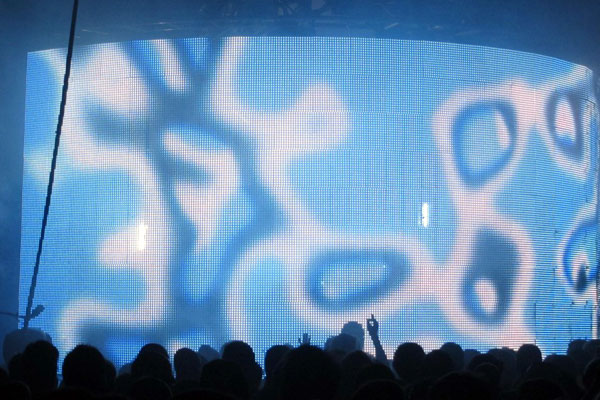 The huge cage/screen in action

He has been teasing throughout with snatches of his biggest tune, Spastik, and finally emerges from his cage for the encore with a little table of gadgets right at the front of the stage. The crowd swarm, phones aloft, and the trademark 606 machine gun percussion gets a massive roar as Hawtin strikes rock star poses in front of the Plastikman symbol - plenty of fans go home with their phones full of pictures of their hero.

I leave looking forward to version 2. 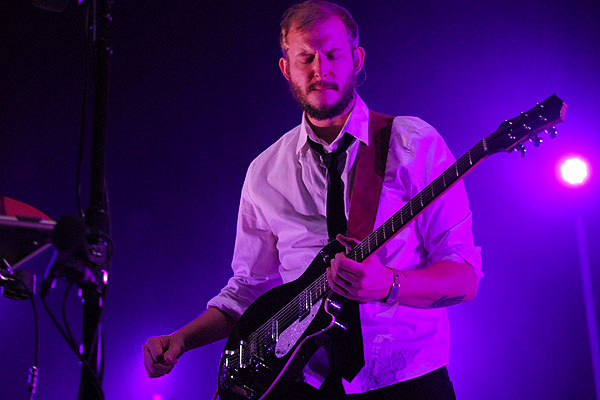 The first Bon Iver album was such an oddity, such a perfectly formed blast of pure, raw, unadulterated songwriting talent and heartfelt emotion, it was hard to know where Wisconsin's Justin Vernon could go next. It therefore did not surprise me at all when I was initially a little underwhelmed by his second album, the self-titled Bon Iver. The log cabin roughness had been swapped for a bit of studio sheen and polish. There was still the fragile vocal and the impenetrably beautiful lyricism, but I felt he had lost something by cleaning it up.

For those lucky enough to snatch a ticket for the Usher Hall gig, though, it soon becomes clear that there is nothing disappointing about these songs at all. Bon Iver has moved on and grown into a powerful live force, thanks in part to a gang of embarrassingly talented multi-instrumentalists. On stage are two drummers, a one man brass section, two guitarists, violin, percussionist and a vast array of pedals. Vernon himself has transformed a little too, slimming down, trimming the beard and donning a tie, more off duty geography teacher than wild mountain man. 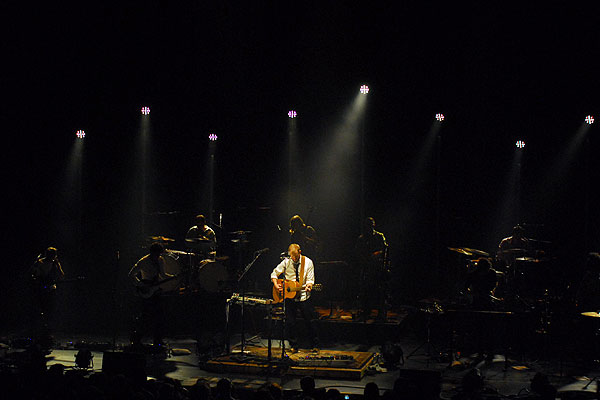 From the opening blast of Perth the audience is enraptured. The band stick with the new material until well into the gig and it becomes obvious that these songs are as good as the first album. The standard of playing on display is impressive, but despite the dense orchestration Vernon's vocal always shines through. Though often hiding behind the falsetto that made his name on the first album, it's when he sings in his natural, deep baritone that you realise that it's not just the songwriting that makes this work - he is an unusually powerful singer.

This gig is a masterclass in light and shade, in tenderness and crescendo, catchy pop hooks combined with avant-garde weirdness. Re:Stacks provides one of the most powerful moments when Justin sits down at the mic alone with his guitar, making me think I would love to hear him sing a small bar...but then when the full band blast in with the encore and try their damnedest to lift the roof off the Usher Hall I'm just happy to be here. Cod emotion-peddlers like Coldplay wish they sounded this epic. 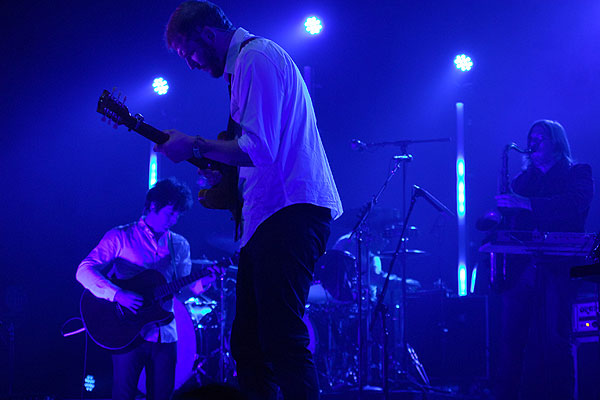 With the final predictable but perfect encore of Skinny Love, I'm struck by the incongruity that such an intimate breakup song should have come to this point, inspiring joyous chanting from a huge crowd. Judging by his easy banter and his beaming face at the end, this is a role which reluctant hero Mr Vernon is getting used to.

Welcome to our blog. We are the web arm of BBC Scotland's Music department, and we produce a website called Scotland's Music. We cover festivals and sessions from all genres of music in Scotland, from dubstep to bagpipes. Look out for regular featurettes, reviews, general outpourings and surprise guest bloggers.

You can stay up to date with Scotland's Music blog via these feeds.

Bert Jansch, the legendary Scottish acoustic guitarist, died this morning. He came to prominence during the sixties folk revival, and as part of the jazz-folk supergroup Pentangle with another guitar maestro, John Renbourn. His distinctive technique of finger-picking and string...

Gil Scott-Heron, the man credited with being the father of rap music died at the weekend at the age of 62 after returning from a European trip. Gil Scott-Heron. Photograph copyright Mischa Richter The Chicago-born, Tennessee/New York raised poet, novelist...

To round up the Bob Dylan birthday extravaganza, we dug out this tender cover version from Frazey Ford, filmed in session for BBC Radio Scotland's rather good Another Country with Ricky Ross Americana show. The song is from Dylan's 1976...

24th May sees one of contemporary music's most influential singers and songwriters, Bob Dylan, celebrate his 70th birthday. The man from Minnesota who was inspired by Woody Guthrie and Hank Williams penned some of the best known, and most frequently...