This page has been archived and is no longer updated. Find out more about page archiving.
BBC Scotland Homepage
Scotland Learning
« Previous | Main | Next »

I was lucky enough on Thursday to attend the Tapestry Masterclass, 'Fly Me To The Moon' in the Royal Concert Hall, Glasgow. The place was packed out, and with the names on the list of speakers, that was hardly a surprise - Tom Bryce, Walter Humes, Keir Bloomer... and one Professor Jerome Bruner. I was trying to send updates to my Twitter feed as best I could from the hall, but my lack of forethought meant I was only on my phone (with very sore thumbs) and the internet connection was a little patchy. Luckily, Ian Stuart from Islay High School had the same idea, but had come much better prepared - laptop and all. His updates were really useful and allowed teachers to tap into the action from all over the country. 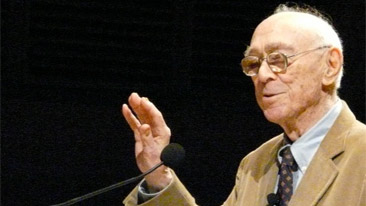 Dr Claire Monaghan, who works for the Schools Directorate in the Scottish Government, introduced proceedings with a refreshingly frank discussion of the implementation of the new curriculum. Keir Bloomer, chair of the Tapestry Partnership, gave an interesting and very in-depth look at assessment, or as he called it - 'measuring what matters'. His reflections on how we can best assess the four capacities and the possible ethical limits of assessment were thought-provoking. It certainly made me consider the role of assessment in a different light.

Prof. Jerry Bruner, at 93, the elder statesman of educational theory, was a warm, engaging and immediately intelligent speaker. He took his audience through the four modes of learning as he saw it: 'storage', or rote learning; extrapolation; placement and conversion. His idea of devoting a small amount of time in each lesson to what he called 'educated guessing' - allowing pupils to have the confidence to estimate, and then work out why they guessed in a certain way - was a new and interesting one, and in the light of the four capacities would certainly develop effective contributors, successful learners and confident individuals. Many schools have already integrated practices such as the Storyline approach for teaching history, and Prof. Bruner's view was that narrative was something that schools could, and should, tap into a lot more.

My only slight issue with Bruner's point of view was his disregard of television â€" he even asked if the 'BBC Scotland guy' was there, luckily he didn't pick up my (very weak) 'yes'! I think this follows on from a previous blog post I made about Julian Chapman's comments at the NASUWT conference, and John Heffernan's fair and intelligent response. I think we should differentiate between sitting children in front of a television for hours on end, and allowing teachers and learners to make use of the media as part of lessons and informal learning. As regular readers of the blog will know, I feel pretty much the same way about computer games - these can be rich resources when used and contextualised in the right way. I believe that teachers have the professionalism to make this distinction, and I'm sure that Professor Bruner does too. Maybe he just hasn't come across our resources yet! His final message to all of those in Scottish Education was 'get on with it', and I'm sure we can rise to that call to arms.

Professors Walter Humes and Tom Bryce then did a bit of a double-act on the implications of Curriculum for Excellence for Scottish teachers. They were both informative and entertaining (the suggestion that our MPs be judged on the four capacities went down particularly well). I could see that their presentation was immediately useful to the many teachers who'd assembled, and they certainly received a grilling during the question and answer session. It was really good to see the teaching profession and the researchers engaging with each other over the issues surrounding CfE.

I'd really recommend looking on Twitter for the live stream from the event mostly provided by Ian Stuart, with a couple of inputs from myself - search for #tapestryworkshop. And, if you ever get the chance to hear Jerry Bruner speak, take it â€" you won't be disappointed.

BBC Scotland Learning will bring you diary updates of our latest developments, production tales and things we've been learning while out and about at schools and conferences. We'll also include information and links to programmes, websites or events from across the BBC — content we think would be useful for teachers, parents and learners in Scotland.

You can stay up to date with Scotland Learning Blog via these feeds.

...or enter keyword(s) below to search our database of over 5000 video and audio clips:-

You can also sign up to receive the BBC Schools Newsletter of latest developments and things to look out for, direct to your inbox.