Nicky Moss recently came first in the women's paragliding competition at the British Open in Àger, Spain, despite narrowly avoiding death earlier this year after both her parachutes failed during a competition. 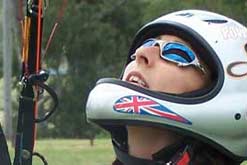 Nicky was competing in Australia when strong winds caused her canopy to fold in on itself. She spiralled several hundred metres towards the ground before throwing her reserve parachute, which also malfunctioned, causing her to crash land in a forest. Luckily she came to rest hanging upside down 10 feet off the ground in a gum tree….

After this she thought seriously about giving up the sport, but managed to get back in the saddle to compete in the British Open in September, which she won.