India ready to spice up Formula 1

The glamorous globetrotters of Formula 1 will stop in South Asia for the first time this week as India makes its debut on the grand prix calendar.

There is a real sense of anticipation within the sport that the race outside the capital city of Delhi will add some spice to the season now both championships have been settled - as well as introducing a new global powerbroker into F1.

"It's a historic and symbolic moment," enthused Narain Karthikeyan, India's first F1 driver, who returns to a seat at the HRT team this weekend.

Despite spreading east and west, it has taken F1 more than 60 years to make its way to the world's second most populous nation.

The sport's first appearance in India was back in 1982, when the Force India team's co-owner Vijay Mallya, then a young businessman with a fascination for fast cars, drove Nelson Piquet's 1978 Ensign in a series of events around India.

But despite Mallya's early foray, the sport's commercial rights holder, Bernie Ecclestone, waited until the mid-nineties before pursuing plans to add India to the calendar. An agreement to stage the race in Greater Noida, a new city outside Delhi, was finally reached four years ago.

Unusually for a new entrant on the F1 calendar, government is not committing any funds to the grand prix. Instead it is a private venture funded by construction specialists the Jaypee Group, which has spent £205m on the new track alone.

Organising the grand prix is the firm's first foray into sport but, despite F1's notoriously high price tag, Jaypee views the project as a strong investment.

The Buddh International Circuit - designed by Ecclestone's favoured architect, Hermann Tilke - has been devised as the centre piece of an ambitious 'Sports City', which will include hockey and tennis stadiums - pitches have already been dug in for a state-of-the-art cricket stadium.

Building cricket stadiums for the sport's devoted Indian audience can be viewed as a pretty safe bet but India's appetite for F1 is more of an unknown quantity.

"You cannot compare F1 with cricket in India because cricket is like a religion," explained president of the Federation of Motor Sports Clubs of India Vicky Chandhok, who described himself as Ecclestone's "eyes" in India.

"But F1 is a vibrant sport, it oozes glamour, it oozes sex and we have the perfect audience - the youngest population in the world are in India."

Karthikeyan, who first saw F1 when a friend bought him a 1989 season review video, agrees the sport should not try to compete for the cricket audience.

"F1 is definitely not watched by the same demographic as cricket," he said. "The urban areas are where F1 is most popular, among people who like technology.

"They have other things on their mind in the predominantly rural areas; where there are farmers, I don't the connection with F1 is that big, whereas cricket is accessible to everyone."

Who F1 will appeal to is one thing but the other big question is how many?

The Indian potential audience is huge, with a population of 1.18 billion. However, a large population and a growing economy does not necessarily make for a receptive audience - as has been proved by the lacklustre response to the Chinese Grand Prix, which has been running for eight years but still struggles to attract a crowd.

Before the Indian GP, it is estimated that 27m Indians tune in to watch F1.

ESPN Star Sports is the sport's sole broadcaster in India - although eight national news channels have also been accredited for the race - and F1 is included in part of a satellite subscription package which Karthikeyan says costs less than a pound a month.

Television audiences for the first Indian GP are expected to rise above 30m, with an estimated 200,000 expected to watch from the grandstands over three days.

The novelty of the first race is bound to lure in a new audience but sustaining both interest and growth in F1 when the circus leaves town is a different challenge. 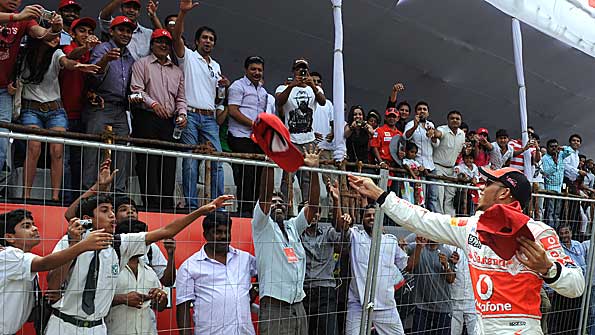 On the plus side, motorsport has some established some roots, with national karting and rallying championships already in place as well as a three-tiered single-seater series powered by engine manufacturer Suzuki, whose subsidiary Maruti Suzuki is India's biggest car manufacturer.

Chandhok, whose son Karun is the Team Lotus reserve and only the second F1 driver from India, is confident the GP will spark new interest.

"I honestly think there is going to be a huge boom in motorsport," he said. "People like Karun really struggled to make it because of the [lack of] financial backing but the next generation will find it easier."

Karthikeyan is more cautious: "It could go two ways; one like the Korean Grand Prix where it happens, there is some attention and then nothing happens in any form of motorsport for the rest of the year.

"Or it could be like Malaysia where, after F1 arrived, there is a huge interest in the lower formulae and a lot of motorsport is going on there in a big way.

"There are lot of kids who will see the race in India and want to emulate the drivers."

Force India, who regard the grand prix as an "emotional" home race, have launched their own academy to help ensure the Indian GP is not the only outlet for Indian talent.

"There are three sectors," explained deputy team principal Robert Fearnley. "The first is the one-in-a-billion search for an Indian driver, the second is the idea to help bright young Indian aerodynamicists and mechanical engineers through university and the third is a vocational plan to bring in technicians and mechanics."

There is also confidence that F1 and India will go on to forge mutually beneficial commercial partnerships.

Sauber's Indian-born chief executive Monisha Kaltenborn says: "It was always a bit of a mystery why we couldn't attract Indian companies.

"Because the Indian market is so big, most products and brands didn't necessarily see beyond their boundaries, but now they can use F1 as a platform and we offer our partners something additional if India is a big market for them. It's a win-win situation."

There are, then, a lot of expectations weighing on the first Indian GP, whether it is winning the hearts and minds of a nation, acting as a catalyst for grassroots motorsport or building new global business partnerships.

But there is also a warm confidence that F1 and India are only at the beginning of a fulfilling, new relationship - and there should be some fun to be had too.

"I think you'll enjoy it," smiled Karthikeyan. "You'll be in good hands."