Jenson Button arrived in Japan as the last man standing in the fight to stop Sebastian Vettel winning the 2011 title.

To keep his title hopes alive, the McLaren driver has to win this weekend and hope Red Bull's championship leader fails to score a single point.

It is a task almost certainly doomed to fail and Button joked in Suzuka that Vettel was the only person still saying he had a chance to steal a second title from under his nose.

Vettel, who is seeking a third straight pole-to-flag victory in Japan, is the favourite this weekend after taking a mind-boggling 12th pole of the season in Suzuka, but Button lines up second after two days in which McLaren have looked surprisingly competitive.

Button's hopes of victory are very real and, regardless of the championship situation, the 2009 champion has both professional and personal reasons to want to perform well on Sunday.

The day after stepping off the plane from Singapore, where he finished second, Button and his race engineer Dave Robson got to work plotting how to win for the first time at Suzuka.

"I've always loved racing here," Button, whose best finish in Suzuka is third for Honda in 2004, told BBC Sport. "It would mean a lot to me to win here.

"The first year I came here was in 1996 when I raced karts and that was an unbelievable circuit, like the F1 track. Then the first time I came here in Formula 1 in 2000, I qualified fifth and I've finished every year I raced here in Suzuka.

"It's a very special race - I remember watching Ayrton Senna and Alain Prost racing round here wheel-to-wheel - and it does feel like a second home race for me." 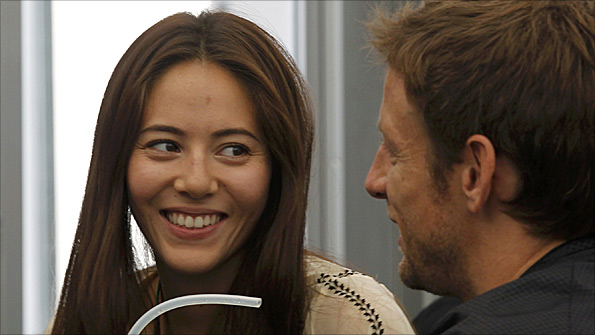 McLaren also want Button, or team-mate Lewis Hamilton, to finish as runner-up in the championship and are determined to hold off Ferrari to finish a more lucrative second in the team standings.

With five races left to go, Button leads a compelling battle for second from Ferrari's Fernando Alonso and Red Bull's Mark Webber, and is 17 points ahead of Hamilton.

Beyond points and position, Button, a former Honda driver, is also driven by emotional incentives, not least that he is dating Japanese-born model Jessica Michibata.

"I have a lot of very good connections," said Button, who has in Japanese kanji symbols 'Ichi Ban' - which translates as number one - inked onto his ankle.

"I worked with a Japanese team for seven years, I've had a Japanese girlfriend for the last three and I love this place. I spend a lot of time here in Japan, Kyoto and Hiroshima. I've just been down the coast to a fishing port that has the most amazing sushi.

"I really enjoy the Japanese culture, the food and how respectful the people are and how they welcome other people in. The karaoke is great too - my missus would go to karaoke during the day if she had an hour free, which seems strange to us in Britain!"

In March, while Button was testing in Spain, Michibata was sheltering under a table as an earthquake shook Tokyo.

The after-effects of the tsunami and earthquake, which devastated many coastal parts of island country and killed more than 15,000 people, is another reason why Button wants to race well in front of his Japanese fans. 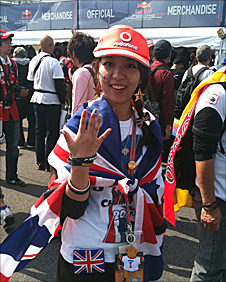 "It was a really horrible feeling as I couldn't get hold of her," added Button, who, along with Hamilton, is auctioning his race helmet to raise funds for a Japanese charity. "But it was nothing like what the people on the ground were going through.

"Having that connection to Japan it's difficult but I think the Japanese people have shown us how strong they are and how they pull together. They had people going through the rubble and finding things that were worth money and handing them in for charity. I've got a lot of respect for the Japanese people and I think we can learn a lot from them."

Button is hugely popular in Japan and as you wander among the passionate fans in Suzuka many of them are wrapped in British flags or with 'Button' painted on their cheeks and even finger nails.

The English racer might not be able to stop Vettel taking the title in Suzuka but if he can push the German hard for the victory, as he did in Singapore, his efforts will not go unnoticed.

"Japanese people love to celebrate," he added. "Hopefully we can put on a good show for them this weekend and plant a good memory."