Nico Rosberg is in reflective mood. After nearly six seasons in Formula 1, the Mercedes driver is still searching for his first race win.

The son of 1982 champion Keke Rosberg is rated as one of the fastest and most stylish racers on the grid but while others, including his former Willams team-mate Mark Webber, have gone on to underline their talents with wins, Rosberg has yet to have his talents vindicated by victory.

The conundrum is not lost on Rosberg who, to his credit, was happy to talk candidly about the dilemma of his faltering career progress.

"Above all is the fact that I want to win races," said Rosberg, who left Williams to join the Silver Arrows at the end of 2009 simply because he felt Mercedes would build a car capable of fulfilling that ambition.

"[I'm] not where I was expecting to be that's for sure, far from it actually. It's been a difficult season for me and for the whole team." 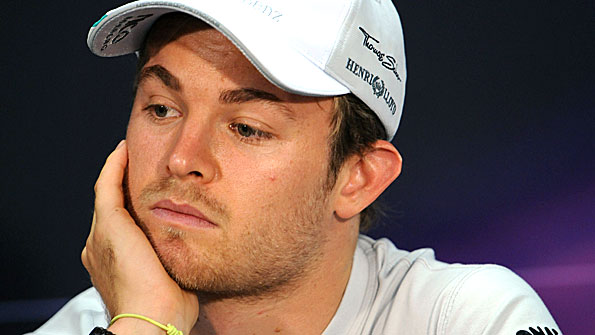 Rosberg insists that results are motivating him rather than his image

Mercedes have fallen from the heady heights of winning both championships in 2009 as Brawn Grand Prix to fifth in the team standings at the halfway point of the 2011 season.

The team say the effort of winning both titles was costly last season and this year they had difficulty effectively interpreting major rules changes.

Mercedes have struggled to find balance with the installation of the Kers energy boost system and performance in the new Pirelli tyres; there were niggling issues with the activation of the moveable rear wing and their adoption of a more forward-facing exhaust - but ultimately what the car lacks is competitive pace.

A year ago, Rosberg was turning heads as he out-stripped his illustrious team-mate Michael Schumacher on his way to three podiums.

This season, the pair are more evenly-matched - Rosberg leads Schumacher 4-3 in higher race finishes - and yet the 26-year-old believes he has taken a step forward.

Can he say that with confidence when the results on paper tell a different story?

"Definitely, you get better every year, you always learn something new," insisted Rosberg, whose best results in 2011 are two fifth places.

"I get my happiness from knowing that I've had a good performance with what I have available.

"To explain why you don't see it on paper is that our sport is so linked to the car and this year our car is not performing as well as it was last year in comparison to other teams.

"But my performance in the car is a little bit better again than last year. I know what can be achieved with our car if I am driving at a very, very high level.

"But now I've probably made a mistake to even mention it because it makes it sound like I think I'm mediocre and I think I'm getting there and that's not the case. It gives the wrong image in light of my recent results with the car."

Image is important to Rosberg.

For starters, he has to contend with the nickname 'Britney' after Ms Spears, which was given to him by his peers because of his blond hair, good looks and interest in fashion. Something he wryly describes as "not the best nickname".

In conversation he is thoughtful, inquisitive and, at times, cautious - he wants to say the right thing. In glimpses of him away from the pressures of the F1 paddock, he is friendly and has a dry sense of humour.

But of more importance to Rosberg is how he is perceived as a driver, particularly as he is intent on finding a place in a team who can give him a winning car.

"Image has an influence on what sort of car I will get to drive or deals that I'm offered by teams," he added.

"In general, I'm not concerned with it at all, I'm here to race and drive race cars but there is the fact that my career, and when can I win races, relies entirely on what sort of car I have and in order to have a good car the perception of others, especially the team bosses, is something that is important."

Rosberg wants to put himself in the shop window for the consideration of the front-running teams and there has been recent speculation linking him to McLaren, Ferrari and Red Bull as well as reports that he will extend his contract with Mercedes until 2016.

"There is interest from other top teams, which is a good thing for my career, but there is nothing more than that," he commented.

Last month, Rosberg visited the Mercedes factory in Brackley to check on the development of updates for the 2011 car and to sit down with team principal Ross Brawn.

"I [wanted] to ask some questions because obviously we are not where we want to be," Rosberg explained.

"I spoke to Ross and the feeling was positive. I believe in this team long-term. This team will have success - it's just difficult to say when."

And, for now, that may mean Rosberg has to remain patient in his search for his elusive first grand prix victory.