For a man making his grand prix debut this weekend, Daniel Ricciardo finds himself with an unusual amount of Formula 1 experience.

He piloted Red Bull's championship-winning RB6 car at a test for young drivers at the end of last season, and then became Toro Rosso reserve in 2011 before he was loaned out to Hispania as their race driver for the rest of this season just in time for the British Grand Prix.

Despite going from the fastest car on the grid to the slowest in the space of a few months, Ricciardo is viewing his promotion to Hispania race seat as a big step in the right direction.

"The car can't be compared to the Red Bull but it's still an F1 car," said the 22-year-old with an ear-to-ear smile. "It does some amazing things speed-wise and the potential under braking is still pretty strong. I'm definitely having fun.

"I was only 18 when I was picked up by Red Bull, and I knew there was still quite a few years to prove I could go through the categories and get into F1. It's only become a reality now."

The wet and windy weather that buffeted Silverstone on Friday meant Ricciardo did not have the best conditions in which to show his capabilities during his first full day of practice. 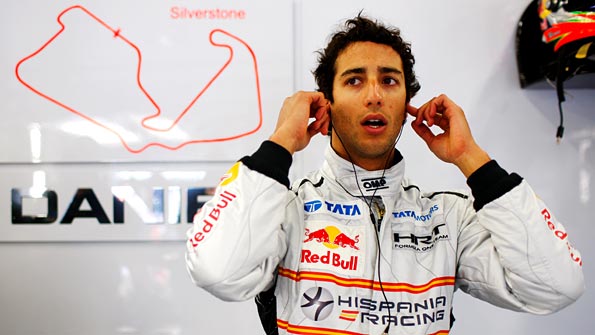 Ricciardo is hoping to impress at Silverstone this weekend. Photo: Getty Images

But he made a solid start, closely matching team-mate Vitantonio Liuzzi in the morning and beating the experienced Italian by 0.209 seconds in the afternoon.

All drivers use the man on the other side of the garage as their initial benchmark but Liuzzi presents an interesting comparison for Red Bull as they assess Ricciardo. The team know just how far Liuzzi's talents reach because he drove for Red Bull in 2005 before joining Toro Rosso.

Does Ricciardo's future with the Red Bull family hang on whether he can regularly beat the Italian?

"It wouldn't hurt," responded Ricciardo. "I'll drive as fast as I can and where I end up will determine my future.

"Tonio is quite experienced and has spent more time with the team than I have. Going by the pace today I was quite happy to be in a competitive range and we'll see how it goes in the dry.

"The plan is to be around and to race in F1 for many years to come so with that I have to be fast and to prove myself."

Ricciardo asked fellow Aussie Mark Webber for some advice this weekend and there is even speculation that Ricciardo could be fast-tracked into Webber's seat in 2012.

So, does Ricciardo fancy a seat with the fastest car in the field?

"Having a connection and a link with Red Bull, it's somewhere in the back of my mind and it would be nice one day," said the Australian, who handily already lives near the team's headquarters in Milton Keynes.

"The news I got last week has filled up quite a bit of space in my head so I will just try and enjoy that at the moment.

"My main objective this weekend is to finish the race. Of course I'll push and try and get as much as I can from the car.

"I don't think we'll be fighting with Red Bull or Ferrari but I don't plan running at the back and having my own race. If I can be a few more places up the grid then of course I'll go for it. It would be nice to be involved in a good fight and I'll be pushing through all the race."

At the end of his first media session as an F1 racing driver, Ricciardo made another unusual gesture as he gathered up the dictaphones in front of him and handed them back one-by-one to each member of the media.

"There are a few more people here than I thought," said Ricciardo, with another trademark grin. "It's nice that people are taking an interest."

It's fair to say that there are plenty of people watching this space. After all, who's to say Ricciardo won't emulate former Red Bull protege Sebastian Vettel and rise through the ranks of Toro Rosso and Red Bull to become a world champion?