Revamped Silverstone wins over the fans

Silverstone's owners have spent £40m in the last two years to modernise the historic Northamptonshire circuit that Formula 1 supremo Bernie Ecclestone once famously described as a "country fair masquerading as a world event".

Of that cash, raised by the British Racing Drivers' Club, £28m has been absorbed by a state-of-the-art pits and paddock complex, and the rest has gone on improving spectator facilities.

This year, ticket-holders to the British Grand Prix have their own "fans zone" - which curves round the Luffield section of the old grand prix track - new steeped, grass banks to watch from and two brand new grandstands at Farm and along the pit straight.

There's even the equivalent of Wimbledon's "Henman Hill" - which has been unofficially dubbed Hills' Hill after father-and-son world champions Graham and Damon Hill - where fans can watch the racing from a giant screen. 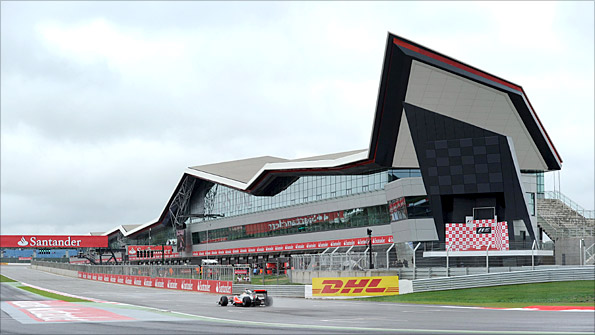 Silverstone has a rebuilt pit lane but not everyone is happy about it. Photo: PA

The philosophy behind the facelift was to give fans the opportunity to rove around in a festival atmosphere - but has the investment improved the experience?

"The last time we came was four years ago and the difference is unbelievable," said Louise Torrance from Aberdeen.

"At the campsites there are now loads of showers, films like The Italian Job at night and a disco as part of the entertainment.

"Was the investment worth it? One hundred percent. We've heard other people saying it's much better than last year, so it can only get better from here on in."

Sarah Davies found herself sharing the weekend with first-time British Grand Prix visitor John Beazley after their mutual friend broke his ankle at the circuit during Friday practice.

Sarah, from Oxford, said: "The medical staff were fantastic. The paramedics took him to the medical centre, set it straight away and took him to hospital."

Beazley, who hails from Sheffield, added: "I've wanted to come for years and years. I've been following motorsport since the Nigel Mansell days and I'm just blown away by the noise and the amazing atmosphere."

The Formula 1 world championship was born at Silverstone 61 years ago when the former World War II airfield hosted the opening round of the sport's inaugural season.

But two years ago Ecclestone was ready to pull the plug on the circuit, leaving the existence of the British Grand Prix in real danger.

The pledge to plunge millions of pounds into Silverstone saved both the circuit and the British GP, and on Sunday a record sell-out crowd of 120,000 fans will come through the gates.

The BRDC can ask for no better vindication than that, but the revamped circuit is not without its problems.

The new pit lane slopes below the level of the track and that means the fans' views of the pit stops from the opposite grandstand are obscured.

The plan had been for the slowest teams on the grid to occupy those garages but the layout was switched so that members of the "Paddock Club" - who pay a premium for their seats - could watch the race-defining stops at Red Bull, McLaren and Ferrari.

The team principals at Red Bull and McLaren, who have been bickering for most of the weekend over a controversial change in the sport's technical regulations, were united in their criticism of the issue.

"For those in the grandstands, who can't see the pit stops, it's a bit of a shame," said McLaren team principal Martin Whitmarsh.

His Red Bull counterpart, Christian Horner, added: "The spectators are not going to see many Red Bull or McLaren pit stops this weekend. It's not great."

There are also concerns that the relocated podium isn't in front of a grandstand and so fans could be tempted to surge onto the track, just like in less safety conscious days, at the end of the race.

And in times of austerity, it is no surprise that some spectators find Silverstone's ticket prices challenging.

Sarah Davies added: "The prices are expensive. It cost me £300 this weekend which is a lot of money when you're on a budget. Silverstone could do more."

Surprisingly, there was one thing the fans were, on the whole, not complaining about - the temperamental British weather, which sent sheeting rain and gusts of wind across Silverstone.

After all, for British fans there's no place like home.