Why the Monaco GP still packs a punch

Once a year Formula 1 absolutely lives up to its billing as the most glamorous sport in the world and that time comes at the Monaco Grand Prix.

On Friday morning, I had to gingerly step aboard a tender and then climb a rope ladder dangling from the side of a yacht to interview Renault's Nick Heidfeld on deck. Yes, this really could only happen in Monaco.

Without a doubt, the glamour and prestige of the tiny principality, where residents are required to have a significant sum in the bank, inflates F1's wow factor.

"I love it here, it is fantastic," crooned Lewis Hamilton, a Monaco race-winner in 2008 for McLaren. "Wow, this is such a beautiful place to be." 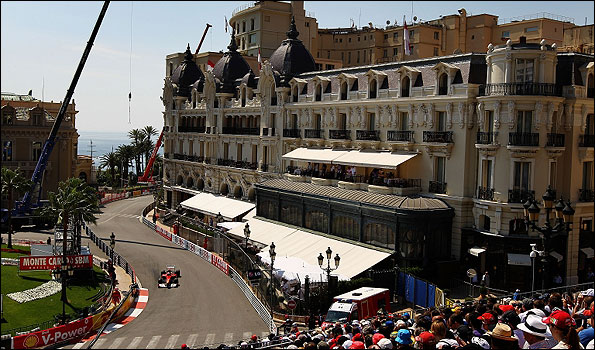 After a muted showing in recent years, the harbour is once again crammed with multi-million pound yachts. Force India owner Vijay Mallya held a Bollywood-themed party on the Indian Empress while the imposing Force Blue made its return with flamboyant owner and former Renault boss Flavio Briatore on board.

Red Bull and Toro Rosso have also taken to water in their floating motorhome - complete with its own swimming pool - while Ferrari have gone one better by putting up their personnel on a yacht.

But for all the privilege and status on show, the Monaco Grand Prix also provides unrivalled access for fans.

The more affluent spectator can fork out up to £3,800 for Sunday's race but the cheapest seat is £65 and offers amazing trackside views and a party atmosphere from the Rochers hill along the side of the royal palace.

It's also the only paddock where fans can walk along the waterfront and peer into the teams' inner sanctums before posing for photos with their heroes as they emerge from the motorhomes.

And when the racing is over and dusk falls, the party begins on the track as fans sip a biere or two at the Rascasse bar. 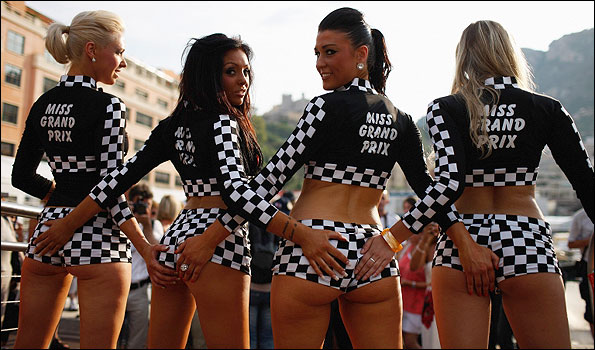 Glitzy promotional events are par for the course in Monaco (Getty)

When Stirling Moss raced here during the Sixties he developed a habit of waving at female fans sunning themselves along the harbour.

Moss said he even used it as a ploy in the 1961 grand prix when he was under pressure from Richie Ginther's chasing Ferrari. Moss took his hand off the wheel to salute a girl and prove he wasn't feeling under pressure.

But can McLaren driver Jenson Button, a Monaco playboy turned triathlete, still have a sneaky glimpse at an average speed of 100mph? "No," he answered sternly.

Whatever you think of Monaco's champagne and celebrity, the yachts and those who pose upon them, Button is spot on - none of it detracts from the racing through the streets.

The miniature land, stacked on a rocky lip of land between France's Mont Angel mountain and the Mediterranean, is just made for the fastest cars in the world to hurtle around.

First comes the noise, the hum hidden among the biscuit-coloured buildings that gathers to a roar as the cars flash past.

Watching the cars fly by the grand Casino, weave nose-to-tail round the hairpin, thunder through the tunnel and then out again in a blink of light past the water and back round to Rascasse is mesmerising, and often nail-biting.

The late Ayrton Senna, who won in Monaco a record six times, spoke of an out of body experience as he glided between the barriers and round the twisting curves.

Driving precision is everything here and there is virtually no let-up, no straights to clear the head over 78 laps.

Two-time Monaco winner turned BBC pundit David Coulthard commented: "For me there's no better challenge for the driver than Monte Carlo and no more glamorous grand prix. For me it's still a thrill."