Rookie Paul di Resta has been the subject of high praise in the Formula 1 paddock in Shanghai after scoring a point in each of his first two races.

The Scottish Force India driver was even likened by one journalist to French legend Alain Prost, another rookie who collected points on his debut.

Praise does not come much higher than that - Prost, who first burst on to the F1 scene with McLaren in 1980, went on to win four world championships and 51 grands prix.

But Di Resta is refusing to get caught up in the hype bubbling around him because he views his performances in Australia and Malaysia somewhat differently.

"All I can say is that we expected a bit more but for whatever reason it didn't quite come," Di Resta told BBC Sport.

"It's nice to get [my first points] out the way at the first and second grands prix.

"But that is the job we're out there to do and it has been a realistic target on both occasions."

Talking to Di Resta in Shanghai, I was impressed by his aura of almost palpable steeliness mixed with calm. Here is a man with a definite plan.

If the main priority on his F1 tick-list was collecting his first F1 points, then the second is beating the man in the same machinery.

Di Resta, who was signed by Force India in January after learning the ropes last season as the team reserve, has already out-qualified team-mate Adrian Sutil twice and finished one place ahead of the German in Malaysia.

He had also been ahead of Sutil in Melbourne but the pair swapped places in the pits because they were running on different strategies and Di Resta crossed the line just behind Sutil in 10th.

"You can gauge yourself against your team-mate," added Di Resta. "And I've got a lot of respect for Adrian.

"I'd like to keep it where it's been and through the races I'm gaining more confidence. I did get the better of him in Malaysia but it's not always going to be like that.

"I wouldn't say he has to be afraid. Adrian is very quick and he's established, all I can say is that our performance has been comparable."

Winning a place in F1 has also given Di Resta, who is the cousin of the three-time IndyCar champion Dario Franchitti, a second chance to test his mettle against his former rivals Sebastian Vettel and Lewis Hamilton.

In his junior career, Di Resta raced against the future F1 world champions, notably beating his then team-mate Vettel to the Formula Three Euroseries crown in 2006 when the German was already dipping his toe into F1 as a tester for BMW Sauber.

Now he has returned to competition with his teenage rivals, does Di Resta think they have grown beyond him in terms of talents?

"They've got good equipment and they're good drivers but at the same time I don't think that anybody's special," he added.

"It's been good [to be competing against them] but at the same time they are a little bit up the end of the grid.

"I'd like to be racing against them. One day I'm sure we will be but I'm not going to compare myself against Sebastian when I'm not in the same car." 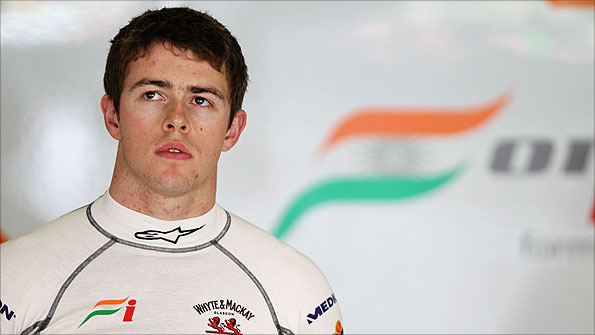 Di Resta has out-qualified his experienced team-mate in both races so far. Photo: Getty

And what if Di Resta was alongside Vettel in the second Red Bull?

"I'd be hopeful I'd be as competitive as Sebastian," he added.

"How much he has developed and how much I've developed from 2006 no-one will ever now until we are in the same position again."

Di Resta is refreshingly clear and open about where he finds himself in his fledging F1 career and where he wants to go.

But there are two points on which the Scot would not be drawn; what his ultimate aim is for 2011 and what difficulties he is contending with.

"I've tried not to think about personal targets at the moment," added Di Resta, whose preparations for the Chinese Grand Prix were hampered by a fuel-pressure problem that kept him consigned to the pits for second practice on Friday. "It's too early to do that.

"I'll take it week by week but what I've achieve I want more now of - and you keep wanting more until you've got it.

"I'm not going to speculate on what [I find difficult] as there are people who will pick up on it and I believe that on the outside you need to show you're strong.

"That is the whole idea of competitive nature, you pick someone's weak bits and you bounce on top of it."

There is one wish, however, that Di Resta is happy to talk about and that is the treat he would like for his 25th birthday, which he celebrates this weekend.

Di Resta's quest to end his birthday weekend on a high with more points to add to his tally was given a nice boost by a career-best qualifying performance in Shanghai.

The 25-year-old had not done any qualifying simulations during his limited running on Friday but he battled his way into the top-10 shoot-out for the first time and claimed eighth on the grid.

Di Resta, who passed Nico Rosberg of Mercedes in Malaysia and almost got the better of Michael Schumacher's Silver Arrow in a battle for ninth place, is now feeling confident he can move forwards during the race.

"Our race pace doesn't seem to be too bad," said Di Resta. "So fingers crossed we can pick up some points again."