Behind the scenes at rugby's tour de France

So it’s all over. After all the waiting, the hype and all the expectation, the tournament seemed to pass in the blink of an eye and leaves us with another four years to dwell over the next one.

What a tournament it was though. I think in hindsight, it will be regarded as the best yet for a number of reasons.

Continue reading "And rugby was the winner..."

Swansea - After defying their doubters once again, and yes my hands are held up, England could pull off one of the most amazing sporting achievements in living memory when they contest the World Cup final on Saturday.

That they will face South Africa in that game is an ironic twist of fate considering the events of the group game between the sides.

And should they manage to overturn the gulf in class evident on that day just over a month ago, it really would complete a comeback of such magnitude that it would sit comfortably in a list of the greatest of all-time, next to Liverpool’s, Take That’s or Lazarus’!

Continue reading "A step too far for England?"

Swansea - World Cup 2007 has experienced somewhat of a lull this week in the wake of last weekend’s dramas, and for me the period of calm has been put to use by partaking in a spot of nostalgic indulgence in memories of semi-finals gone-by.

Admittedly, people who know me will be the first to tell you that I am far from rugby’s greatest historian, but even I know that the encounters that have taken place in the semi-finals of the previous World Cups have produced matches of such acclaim that they will long be etched in the history of the game and many will be recognisable to even the newest of rugby followers.

Swansea - Sorry for the delay guys, it's taken me this long to recover from the weekend!

Moral of the week: don’t come to me for your betting tips! Two out of four isn’t bad but it isn’t exactly good either.

Humble pie time first to the legions of England fans who so promptly let me know that my tip, the Australians, were on their way home and their team that I had "written off’" were marching on through.

Fair play, England came away with one hell of a result in that game and their tactics were spot on.


Continue reading "No more tips from me!"

Barnes will inspire Australia to victory (89)

Swansea - Eight left and by the end of the weekend there will be four.

Which four that will be has yet to be determined, but what is for sure is that the make-up of the semis will be heavily influenced by the performances of each of the team’s key players.

Here’s my rundown on this weekend’s central figures and who will end up winners and losers.

Swansea - Well what can I say?

What an absolutely torrid weekend. We’re out and our coach has gone.

I can’t say that I’m hugely surprised that Gareth was asked to vacate his position following the defeat on Saturday because history has shown us that when the national team underachieves heads have tended to roll - and this World Cup campaign will be categorised as an underachievement.

Swansea - In the first match of Pool B Australia set a pretty daunting 91-point benchmark for our match against Japan but I think 11 tries and 72 points equals job done for Wales.

The text books went out of the window almost from the word go on Thursday night as both teams threw caution to the wind in the opening exchanges, pretty much setting the tone for the rest of the evening.

Such an opportunity for us to break the shackles and run with the ball usually sees us play our most potent and effective rugby and overall that did prove to be the case - not though, before the Japanese ensured there would be no resting on any laurels when they came up with the try of the tournament so far.

Swansea - With the crunch group match against Australia having come and gone, tonight’s match against Japan has the feeling of a fresh start about it.

Everything Wales have done since the Six Nations has been done with that Australia game in mind and of course we would have hoped to emerge victorious from it. However that wasn’t to be and now that the Plan A has been derailed, it’s time for us to crack on with Plan B.

The primary goal still remains a quarter-final berth and to get there as group runners-up we must first negotiate the challenges of the final two group games, starting with the Japanese.

Swansea - I finally got the chance of some first-hand World Cup action on Saturday as the France 2007 carnival, oddly enough, rolled its way into Cardiff.

I decided to indulge myself, too, by getting right into the heart of the city streets and sucking up a bit of the atmosphere.

When you’re involved as a player you get very little exposure to the buzz of a match day afternoon around and about the stadium where, on top of the 70,000 or so ticket holders, countless more enjoy the day in the capital’s numerous hostelries.

Ironically enough, after enjoying a fine pre-match lunch I joined some friends to watch the match - where else, but in an Australian bar!

Swansea - Since the World Cup pools were drawn however many months ago, both Wales and Australia put a pin in 15 September 2007, identifying it as the day when the four-year cycle of building for a World Cup would end.

It would end because it was the day when there would be no more excuses: no more blooding young players, no more trying new combinations and no more considering a loss as anything but failure. It would be time to deliver –
and here we are.

Mixed emotions for a game of two halves (18)

Swansea - With the dust having settled on our win against Canada on Sunday, it’s only now that I’ve sat and watched the boys in action that it’s hit home what I’m actually missing in France.

It was a day of mixed emotion for me and the thought that I may be watching my only chance to play in a World Cup slip away was not eased by the Canadian first-half performance.

In hindsight fans will be asking why it took us so long to exercise our superiority in the contest but it must be understood that in international rugby, regardless of who you are playing or what world rankings suggest, there is not going to be a lot of room early on.

Continue reading "Mixed emotions for a game of two halves"

French defeat gives hope to all (7)

Swansea - So we're off and running and we've seen already that nothing comes easy at this level.

As I suggested in a previous blog, I thought the weight of expectation would be a huge burden for the French players to shoulder and the manner in which they stuttered through their match against Argentina, lacking even a fraction of the attacking conviction evident in the warm-ups against England and Wales, proved this to be true.

Conversely, the purpose with which the Pumas went about their task was streets apart from the fairly lack-lustre attitude that they had shown in their pre-World Cup contests. But, hey, it's now that it counts!

Jones the Pundit calls the Cup (11)

Swansea - The Canada game on Sunday will be vital and the nervous excitement that the boys have built up in the past weeks will all come out.

We'll be out to hit the ground running and really make a statement to the rest to show that we are not to be underestimated in this competition.

I'm confident that the matches with Canada, Japan and Fiji will see three convincing Welsh victories. I'd also defy anyone who thinks that we cannot beat the Australians at home.

Swansea - With the first match of the tournament now just a day away, being sat in Wales writing this blog isn’t exactly what I’d had in mind for this week.

But my best laid plans have once again been rudely disrupted by my body’s refusal to stay in one piece for more than one season and my chance to play at a World Cup has, for now, evaded me.

I play number eight for the Ospreys and the Welsh national team, although you won’t be seeing me at the World Cup because of a shoulder injury.

My first club was Risca RFC and I played for my hometown club Newport before I moved on to play for Bridgend.

Following the introduction of regional rugby, I signed for the now-defunct Celtic Warriors, and joined the Ospreys in 2004.

I have represented my country at under-18, under-19 and under-21 level, as well as making 16 appearances for the senior side, and also featured in the British Lions tour of New Zealand in 2005. 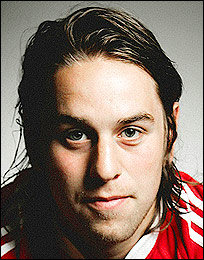