Behind the scenes at rugby's tour de France

Hang out the bunting, strike up the band, Tom and Ben are home.

Not quite in a jet draped with flags, awaiting a press corps and tumult of fans, more in a campervan, on a ferry, still wearing those flip-flops. And that vest. Probably.

So here's a best of Fordyce & Dirs, in photos and links to remind you of the past seven weeks' adventure.

You can check out all of their photos on flickr.com. 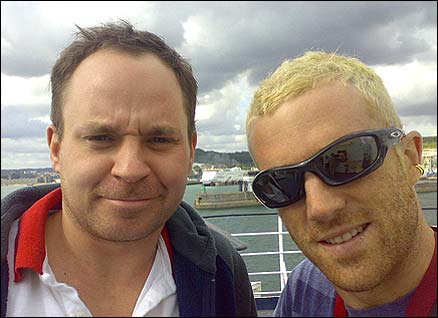 And to think, they left for France with high hopes of adventure and low hopes for the home nations... 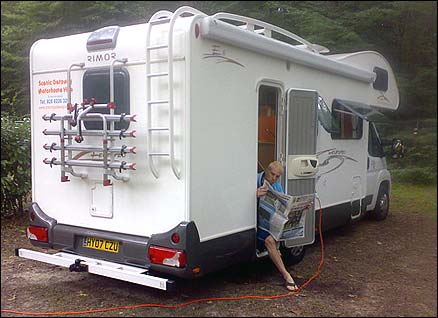 Le Bloggernaut. Before the chemical toilet collapsed, the cooker packed in, and the food went off. Will do 4,800 miles in seven weeks. 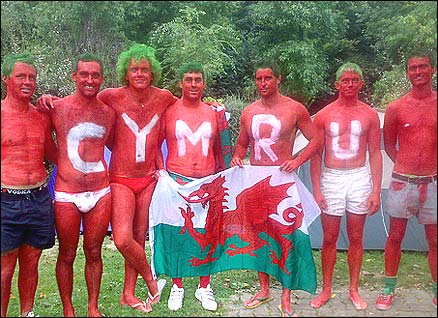 Welsh fans in Nantes show Tom and Ben how to make your flip-flops the best looking part of your outfit. 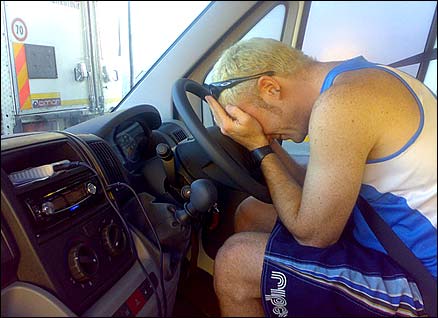 Tom and Ben got broken by the Toulouse road system, totally missing the Japan - Fiji match. They did make it to 13 other games, though. 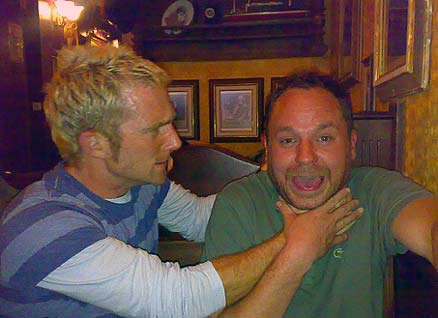 Despite the lows of dry pasta, losing arm-wrestling matches and south-western French one-way systems, Tom and Ben found ways to relieve the tension on the road and also attempt to cut the cost of the trip in half. 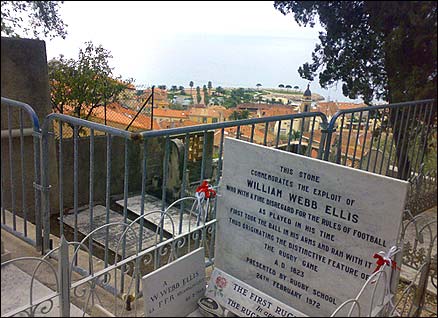 Fisticuffs aside, Tom and Ben continued to justify their "diligence and resourcefulness" to the London office with numerous jours de reserche. Such as visiting the grave of William Webb-Ellis (man turning in grave sound not available). 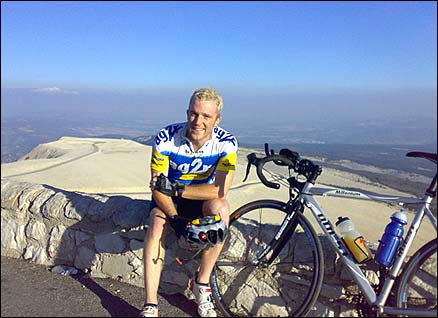 ...or Tom cycling up the toughest mountain trail in all of Europe. (Ben got to visit the Hennessy cognac headquarters.) 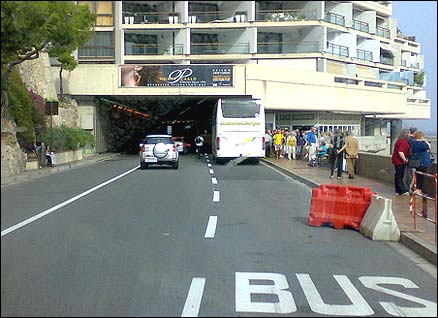 ...and taking a lap of the Monte Carlo grand prix circuit in a vehicle with all the dexterity, speed, and girth of a single-story building. The Monaco mobile library was giving them a serious toot at one point. 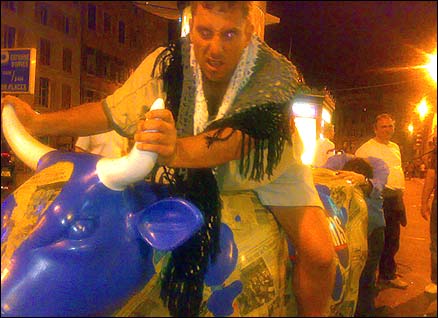 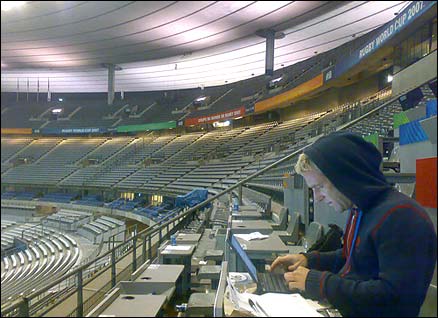 Midnight, Saturday 13 October 2007, England have beaten France in the Rugby World Cup semi-final and the Stade de France has emptied on to the Paris streets to party. Except our man Fordyce, who knows that decent beer, attractive women, hugging strangers and no feasible curfew in perhaps the most glamorous city in the world are but nothing compared to typing out his blog. That's how much he loves you. 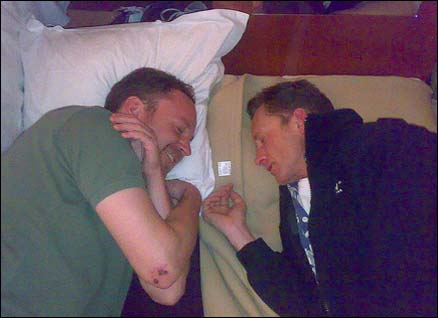 Meanwhile, Ben, knowing a good thing when he drinks a lot of it, dances the night away, and even scores fellow BBC blogger Rob Hodgetts for company on the floor of a hotel room. 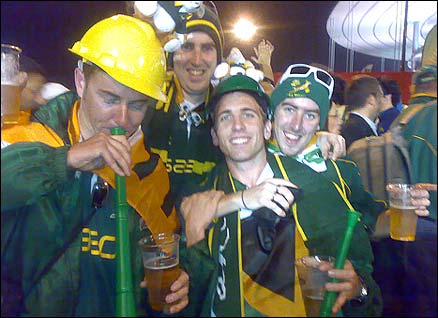 It would be churlish for us to ignore the many rugby fans of evey nation that Tom and Ben met and were welcomed by along the way, and the triumph of South Africa in winning the thing. 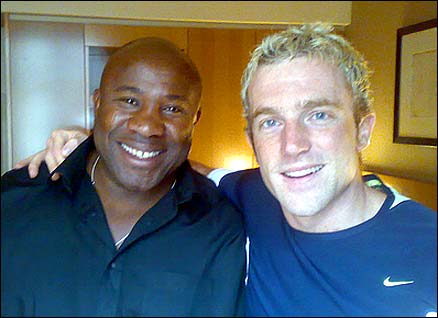 Tom and Ben were so hard at work they only had time to invent one silly game: Ubogu. He (or she) who can say the word 'Ubogu' the most times without drawing breath is the winner. The big V himself caught wind of this and promptly schooled (the then Ubogu world champion) Tom first go. It is the first time Tom has ever been beaten at a sport. 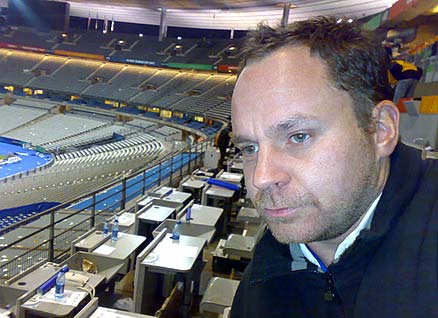 Ben, midnight, Stade de France, 20 October 2007, can not quite comprehend that England had got so far against expectation, only to lose at the last. He is now planning to manage an Ubogu re-match against South Africa, with Tom, Victor, and Carole in Maidenhead playing for England; Bryan, Schalk and JM Coetzee for SA, double or quits on the Webb-Ellis trophy... 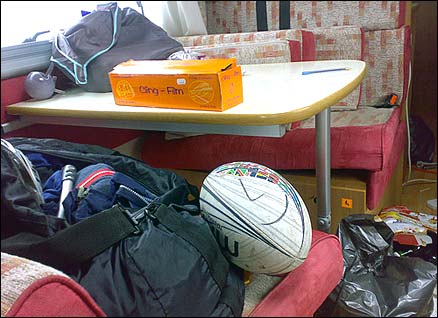 Le Bloggernaut, on arrival in Dover. Sadly, it must be returned to the rental company. Gonzo Fordyce and Hunter S Dirs have tried their best to have it not accepted back...

It's only Ben and Dirs...but I like it. Cheers for a great tournament guys.

Enjoyed some of the blogs, but this last one is a bit self-indulgent isn't it? My licence fee blah blah blah...

Mmmm I didnt think Ben was as old as he looks! I guess all that travelling around put years on you. Back to reality now eh lads? Nice one!

Any chance you can post up your job descriptions on the blog? That way we can all look for a gig like yours.

I'm in no way jealous of course, but I hope you are made to do text commentary on the boring middle overs of every 1 day international from now until eternity, just to even up the joy of the last few weeks.

Thanks for the blog lads - kept us entertained in work for many a day! See you in NZ in 2011 - hopefully on the bus if there's space....

Many thanks to Tom & Ben for allowing everybody not fortunate enough to attend such a storied sporting occasion to enjoy the atmosphere vicariously through you. Worth every penny of my licence fee!

For me, the story of the tournament... Tom got a ticket!

Loving the pictures! Out of interest, in the 3rd picture down, 3rd guy from the right, with the R on his chest. Was he wearing anything down below, or did he just have the Welsh flag to preserve his dignity?

Kindly leave the 'good Doctors' name out of this, unless of course you wish to justify your parody with some salacious facts!!

yep, great journey fellas... shame it ended the way it did, still, very proud of the England team!
enjoyed your blogs too, entertaining stuff, see you in 2011...!!

Thanks for the laughs, guys. I'm looking forward to the next one: "Revenge of the Cheetah"

Tom and Ben the flowerpot men!!

Loved the blogs and videos. One last question though, what is the super-sized roll of clingfilm for or shouldn't I ask..........

Loved the blogs, must say I read the last one with a tear in my eye!

You're more than welcome to keep wasting my license fee on sporting jollies.

Keep up the good work

Loved the blogs, must say I read the last one with a tear in my eye!

You're more than welcome to keep wasting my license fee on sporting jollies.

Keep up the good work

Carole might be Welsh but I volunteer myself to join the England team. I found myself muttering Obogu under my breath at work so have been training hard.

Great blog, gentlemen. Agree with comments on Toulouse road system ... we have to live in the place!

I've written a testimonial/tribute article on probably one of rugby greatest player on my blog.

This blog brings you the inside scoop from the 2007 Rugby World Cup. Here are tips on taking part and our house rules.