In our planning for 2012, there was never any doubt about what would be the most intense period: the Olympic Games themselves from July 27 to August 12.

But we also knew that this would be a summer where people would want to enjoy the build-up to the big event.

That's why we committed to covering the Olympic torch relay on every step of the journey and why we've always been enthusiastic supporters of the London 2012 Festival.

On both those fronts we'd say "so far, so good". The torch has been a major hit in communities right across the UK, and as an addition to the schedule we'll be marking the journey with a documentary on BBC One on Wednesday July 25.

The festival, meanwhile, has had some remarkable broadcast pieces: the Radio 1 Hackney Weekend, Britain In A Day, the Simon Bolivar Orchestra concert from Stirling - and the magnificent series of Shakespeare films on BBC Two.

As we get closer to the Games, the emphasis naturally moves towards sport and I want to pick out some of the programmes you'll be able to see and hear before the Opening Ceremony.

It's not a comprehensive list, but I hope it illustrates the range that's on offer across the BBC.

The most ambitious series runs this week. "Faster, Higher, Stronger" is four one-hour history programmes about the Olympics, though they're not a typical chronology of the Games. 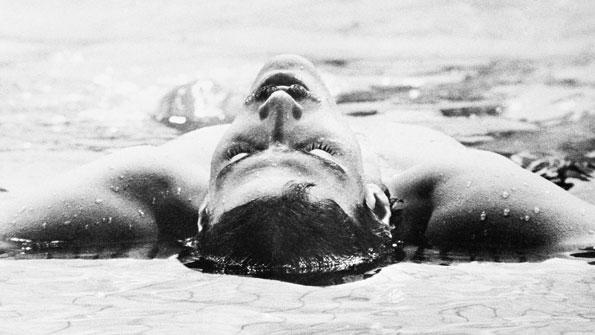 Mark Spitz, who won a then record seven gold medals at the 1972 Munich Olympics

Instead, each show is based around a particular sport or event: the 100m, the 1500m, swimming and gymnastics.

What makes it for me is the brilliant use of archive, which offers both nostalgia and insight. I'd no idea until now about how the butterfly stroke started, for instance; and the dissection of how the 100m is run is the best I've seen on television.

It's all supplemented with interviews with the stars as they are today, and journalists at the BBC Olympics launch loved Nadia Comaneci's account of that perfect 10 in Montreal.

Highly recommended not just by me but by the newspaper previewers too. Monday to Thursday at 7pm on BBC Two.

There are more sport documentaries coming up on BBC One.

The featured stars are:

Over on BBC Three there will be a film they're calling the "Bad Boy Olympian" - judo's Ashley McKenzie - as well as a countdown of the Olympics' Amazing Moments.

On July 17 they'll be asking the question, increasingly salient, "Can Anyone Beat Bolt?"

Throughout London's Olympic and Paralympic story, probably the most diligent chronicler in the BBC has been Radio 5 Live and they're not letting up in the closing days.

This week on the evening of July 10 we have a Virtual Medal Table - looking at how Team GB might do - and on July 11 an Olympic Glossary that tries to explain the Games. Then the regular London Calling strand with Eleanor Oldroyd goes international on July 12.

For those who aren't out-and-out sport fans, we have other genres coming into play too.

The warm, history-based drama "Bert and Dickie" will have a peak slot on BBC One just before the Games; and the show we all love in the BBC 2012 project "Twenty Twelve" will be raising some laughs again from Tuesday night on BBC Two.

We'll alert you to more programmes and the precise timings as each one becomes closer; and our hope is that by the time we're ready for the Opening Ceremony, you'll be in the mood for the feast of live sport that follows.