When we started the BBC 2012 website many moons ago, we were counting down on the front page to three events: the start of the Torch Relay; the first day of the London 2012 Festival; and the Opening Ceremony of the Olympic Games.

Well, after today it's two down and only one to go.

The torch is almost half way through its journey and the festival is officially under way.

I'll be christening it in what's expected to be a suitably rain-sodden British way in Stirling tonight, when the BBC will be broadcasting the Simon Bolivar Orchestra in a project that unites some of the world's best musicians with young people from a tough part of town.

It's another inspiring story in a year that is already showcasing great performances and the human beings behind them.

It seems like the festival itself has made huge strides from the little-understood "Cultural Olympiad" with which the arts contribution to London 2012 began.

People understand the idea of a festival; they like the events that offer free tickets and it's another way in which the whole of the UK can feel part of the Olympics.

There will be something near you and it has a decent chance of being good - or in some cases, to use one of the favourite cultural words, "extraordinary".

Here at the BBC we've long supported the Cultural Olympiad and now the London 2012 Festival across many of our platforms and services. And the best is yet to come. 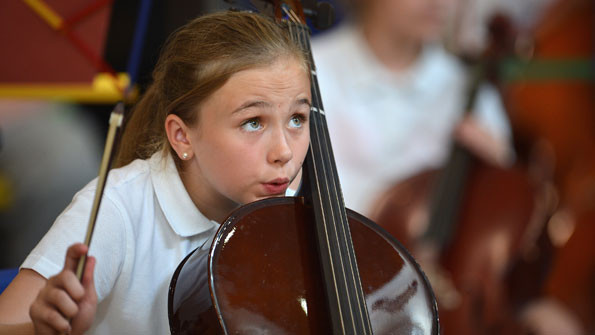 Rehearsals ahead of the Simon Bolivar Orchestra concert in Stirling

That may sound ambitious considering the critical success of "Britain In A Day", but after the Simon Bolivar Orchestra's concert in Scotland we move to London for Radio 1's Hackney Weekend - the biggest event in the station's history, and probably the most star-studded line-up for any concert in the world this year.

Then from July 13th there's the BBC Proms season, which again promises global talent and incredible moments, and live every night on Radio 3.

In drama, the highlight of the Shakespeare season will be the BBC's epic films of the 'middle histories' - Richard II, Henry IV parts 1 and 2 and Henry V - which are coming soon to BBC Two.

And our London season, about our capital's history and culture and people, has been drawing appreciative audiences with Julien Temple's film celebration of the city another likely high-spot.

Many of these events will be on the BBC Big Screens - our official Live Sites partnership with Locog, city councils and other partners.

Stirling is a particularly good example because there'll be a live relay to the Big Screens ahead of the BBC Four broadcast later in the evening.

This commitment to the arts is designed to complement the sport we're looking forward to from the end of July, and it's part of the simple promise we made: we want to offer something for everybody inspired by London 2012.

Most people will thrill to the 100m final, but if you don't, there's Barenboim or Hiddleston or Rihanna.

Or best of all - try something new, and see if you enjoy it. This summer is about opportunities that may not come by again.