This is a summer in which it's just one event after another. From the Jubilee and now into the Euros, with Wimbledon and the Open Golf just around the corner - before we get to the Olympics at the end of next month.

Of all of them, we can predict that the biggest television audience globally will be for the Opening Ceremony of the Olympic Games. Statistics should always be treated with caution, as I've mentioned here before.

But on July 27th we can expect an enormous live international viewing figure, with getting on for three-quarters of the world's population seeing something of London's ceremony in news bulletins and subsequent replays of the key moments.

So that's why there's such a lot at stake in Danny Boyle's direction of the opening celebrations, about which we've been hearing today.

From the initial "Isles of Wonder" concept to today's disclosure of the pastoral scene that will welcome spectators, we can see the outlines of what's being planned - but there's no avoiding the fact that a lot will be at stake on the night.

That struck me forcibly yesterday as I looked at Olympic Park from a vantage point in Canary Wharf and could barely see it through the rain and murk.

Of course, the Opening Ceremony is organised by Locog and it's Danny's creative vision.

It will be transmitted globally via host broadcast operations. But here at the BBC we want to support as best we can the moment when the United Kingdom presents itself to such a massive audience. 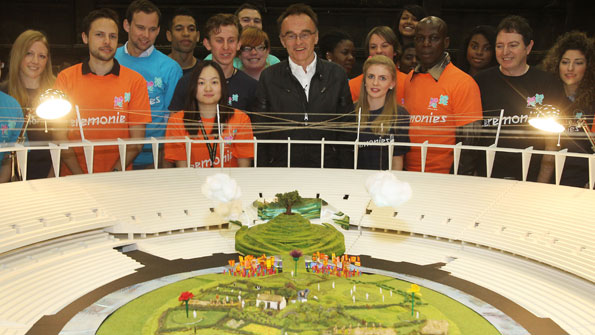 That's why we're announcing today that the BBC is being designated as the "London 2012 Olympic Ceremonies Featured Film Producer" and we'll be contributing two short films to the Opening Ceremony.

I'm not going to give much more away because we want there to be some surprises on the night, however much giddy speculation and rumour there is beforehand.

But Danny Boyle will be using film and other media to supplement the action in the stadium and pretty much the first thing viewers globally will see is a piece of film made by BBC Drama.

That doesn't mean it's a drama: simply that we're using the in-house department most used to doing a specific type of filming. Then another short film will appear later.

The BBC will be involved in the ceremony in other supporting roles too because as the national broadcaster we think it's right that we should support the UK's representation of itself - and, quite simply, we want this to be a great progamme for British viewers to watch along with the the rest of the world.

We've no doubt that opinions will vary about the extent to which that succeeds, but this is one occasion when sitting on the sidelines isn't an option. It's a challenge for the creative sector to show what Britain can do, and we're ready to play our part.