I'm speaking today (Wednesday) at the Media Festival in Manchester. I've tried to pull together our activity aimed at securing a legacy from the 2012 Games, so here's that section of the speech:

This time next year the Olympics will have been over for three months. The circus will have left town. The year 2013 will be looming without any Games or Jubilees or Cultural Olympiads and it's here that you can see the sharpest challenge about what "legacy" really means. The question is what from 2012 can we capture and retain in the following years and for the next generation.

We can, I believe, see some of it already. In our BBC 2012 London Apprentices we have a bright set of people who are learning about our industry. The second intake is with us in London, and we're delighted that the scheme is now operating in BBC Scotland where they're also thinking about how we get the greatest value from Glasgow 2014.

A couple of weeks ago, the BBC's director of news Helen Boaden and I met our community reporters, who are starting to work on Olympic stories - people who are doing a shorter set of training days around broadcasting skills and seeing more of the BBC.

A frequent message back to us is that they didn't think the BBC was for them or about them, but once they get on the inside, even for a brief period, they can see the potential for jobs with us or in the creative sector.

It sits alongside our work experience scheme for young people from the Olympic boroughs - which again has been about providing insights and opening up opportunities. As an example, three people who were previously unemployed have got work directly from this, and they're here now in Manchester employed by BBC Sport. As an industry we need to do much more of that.

At a schools level we're providing both educational content for assemblies through our World Class Project - and the chance for schools to develop their international contacts and understanding via the twinning scheme. Last week we passed the landmark of having 3,000 schools registered with the project.

Then in the London 2012 Festival - the cultural programme - our Hackney music event to be broadcast on Radio 1 and BBC Three is an example of how it's not just about a one-off music event. 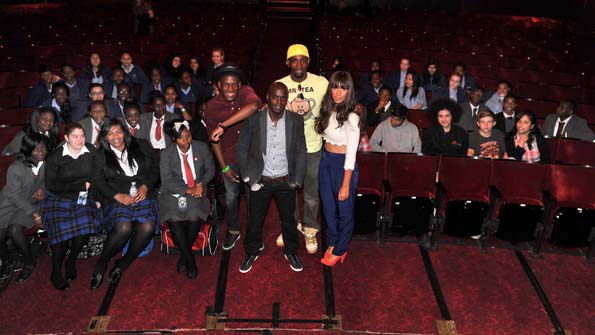 From left: Labrinth, Trevor Nelson, Phillips Odowu, Leona Lewis and students of schools from the borough of Hackney at the launch of Radio 1's Hackney Weekend.

There will be extensive outreach to schools and youth groups around Hackney and the other Olympic boroughs led by Radio 1 and 1 Xtra, who, as well as all their off-air activity, will deliver an unprecedented range of programming from east London.

There will be thousands of lives touched directly by these projects, but millions of lives should be inspired by what 2012 can showcase in digital media and technology. We want to show that the nation can still come together through the BBC for our biggest moments, but it's also about unparalleled choice and personalisation - and people's ability to use digital media creatively and on their own terms.

There's no better example than the project we announced this week in partnership with the Arts Council. "The Space" is a great opportunity for arts organisations to share their work, and in some cases to deliver projects digitally, to audiences across the UK. When we talk about digital public space, this is what we mean and the experiment in 2012 should tell us how we maintain it in the longer term.

And there is, of course, the sport legacy. Having built interest through series like World Olympic Dreams, alongside our live sport programming, we're already planning with our partners what we hope will be the biggest ever Sport Relief Mile in 2012 as a mass participation initiative alongside the Big Splash. We then want the ability for people to see every Olympic sport live and in full next year to be a further catalyst for taking part.

I've only skimmed the surface here of what we're doing. But the message is a simple one. It isn't enough for us just to cover the events of 2012. We want to use the year to show the potential of media, the importance of the creative industries - and yes, the unique role the BBC can play - in shaping the enduring benefits for the people of the UK.