Every so often I check back to the blog I wrote at the end of last year to see how we're doing collectively in terms of the landmarks we expected to pass in 2010. Pretty good so far, I'd say: we've had the Olympic ceremonies announcement and the launch of the mascots, and we learned a lot from the Winter Olympics in Vancouver.

But I also identified a key moment as being the World Cup - and here, leaving aside a daft remark about how great it would be if England got past the quarter-finals, is what I said last December:

"For the BBC there'll be much to learn about our audiences' use of media. We know that video streaming on the internet is getting more and more popular - but quite how much we'll only find out when England are in action at a time when people are in the office or on the move. Similarly with mobile. How we follow the biggest sporting moments in a digital world is shaping the services we offer in 2012."

Well, now we know. Last week our colleagues in BBC Sport had an amazing week for digital media. There were six million different users of this website in one day on June 23rd - smashing all previous records. There were 1.5m users of audio and video; and when England were playing Slovenia there were 800,000 people connected to live streaming at the same time - beating a previous best for the BBC of 360,000. So something that was counted in the tens of thousands when I was Director of Sport for the 2006 World Cup is now nearing the million mark; and there can be no doubt that the digital revolution is underway.

But we should be clear that this isn't an "either/or" - television and radio or online and mobile. It's all these and more. As someone who enjoyed the heart-stopping England v Slovenia commentary on 5 Live, I know the continuing importance of radio services; and there were close to 20 million people watching England v Germany on BBC One on Sunday afternoon, with millions more in pubs and at Big Screens. I've always been clear that for London 2012 the mainstream high definition TV experience is key for success. 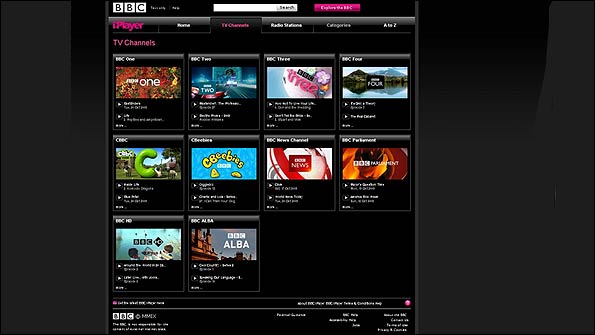 The BBC's iPlayer has proved to be a great success

However, the vastly increased amount of digital content - and the much greater choice you have available - is making us debate some of what we offer. Among that is the role of traditional TV highlights, and with the conspicuous exception of Match Of The Day - which goes from strength to strength - we've witnessed a marked decline in the numbers of people coming to highlights shows. The reasons are obvious: more live programming means less need for viewing through scheduled highlights, but also there's the massively greater availability of content that you can view at the time and in the place of your choice.

We know the great success of the BBC iPlayer, but demand is also high for the audio and video you can get to quickly on websites like BBC Sport and BBC News. At the time of writing this, I'm able to watch Andy Murray's victory on Monday or Brazil beating Chile - and there are the sports bulletins across our 24-hour news services too if you want to catch the best bits of recent action.

So thinking about 2012 - our idea is that our services will offer more than ever before, but you'll be in charge of the scheduling not us. With live action going from nine in the morning to close to midnight, and all the best of the day available on iPlayer and online and on regular BBC News programmes and the BBC News channel, is there a need for a traditional daily TV highlights programme at all? Somehow I don't think we'll lack the opportunity to see the greatest moments many, many times.