These are jobs that define 'hot seat'. Their occupants take charge of one of the highest profile global events, with a live audience of round about one billion. And today we've found out who will be creating the Opening Ceremony of the London Olympics - just over two years from now.

But there's other striking experience too: for instance, Hamish Hamilton is the British man who directed this year's Oscars ceremony for TV and seems to have come a long way from an accountancy course at Stirling University.

Each ceremony will then have its own artistic director, and we're going to have to wait for three of those to be announced - but, proving that speculation can sometimes be right, the Olympics Opening will be in the care of Danny Boyle. 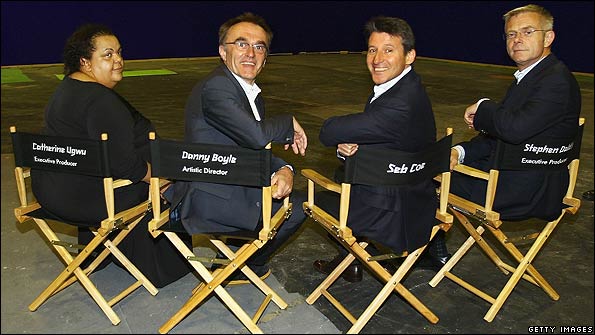 His Oscar triumph was for "Slumdog Millionaire", though journalists as far afield as Australia have been remembering some of his earlier and rather grittier work.

It seems to me, though, that the overall team is about as A-List as it's possible to get. Whether you love or loathe some of the things they've done, these are people at the top of their creative game with global reputations. And we should wish them the best as they start their work because the moment of revelation will be in the brightest of all spotlights.

We know already that London's Opening Ceremony will simply not be like Beijing's. The budget will be smaller, and the aim is not to emulate but to be different. That doesn't mean, though, that the creative ambition should be any less. As these new appointees settle into their hot seats, the key thing is surely to let them get on with it and not weigh them down too much - but if you've any thoughts you wish they'd hear, the space is available for your comments as ever.