How important are big sports events to a country's identity?

Most of the people I meet - and last week's itinerary included Southampton, Manchester and Leeds - are in favour of the Olympic Games being staged in London. It's the circles I move in, I know: in the nature of my job I comparatively rarely come across the sport-rejectors and 2012 sceptics.

But there's polling evidence that the UK's pro-Olympians are in a majority - and these Games are, in any case, emphatically on their way.

You can see just how much progress is being made on the official webcams.

The 2012 Aquatics Centre recently saw its roof lifted into place

The question popping up often now is how the 2012 Olympics fit into the wider UK sporting story.

We know we already have the Commonwealth Games coming to Glasgow in 2014 and the Rugby World Cup then follows in England in 2015.

Last week there was a flurry of activity - if that's what you call unceremoniously dumping some of the board - around England's bid for the FIFA World Cup in 2018.

And really there are two visions here: one of a golden decade of top sport in the UK in which we're world-class at hosting events and deriving benefits from them - or the second which flinches from the cost, the disruption and the alleged vulgarity of it all.

I'm taking a gamble that Catherine Bennett, who represents the second of these arguments in the most recent edition of The Observer, doesn't go to much football since I didn't see a lot of thuggery, vomit or even jingoism in Germany's brilliantly-organised World Cup of 2006. Or at the overwhelming majority of domestic football.

But where she's right is in talking about the difficulty of identifying the benefits of most bids for the mega sport events.

A sift through recent history will show that almost all host cities and nations understate the costs and overstate the benefits.

We can hope that London 2012 will reverse that - on benefits, at least, because the costs argument has already been lost - and there are public ambitions from both the Conservative Mayor of London and the Labour government nationally.

In the BBC we'll keep a keen eye on how London 2012 delivers against these objectives.

But with London and with Glasgow and with the FA's bid for 2018 there's part of the debate only the public can decide - and that is how much better they feel, and how important it is to the country's identity and well-being, that these events take place here. 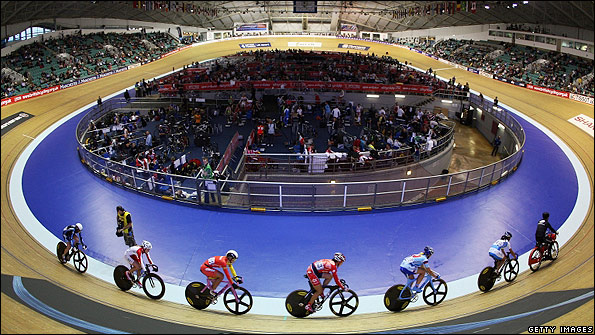 It's a different version of the impact on Brazil and South America, beyond the purely economic, that was discussed around Rio's bid.

This struck me particularly in Manchester on Friday.

I'm interested in hearing from Mancunians and from everyone else who footed the bill, but it seems to me that the city got a long-term boost from hosting the successful Commonwealth Games in 2002 and it's done decently in legacy terms too - as you see in the Velodrome with its contribution to Team GB's cycling success and every time Manchester City play at Eastlands.

Whether it justifies the cost points again to the question the UK public will be answering in 2012 and beyond; but what's beyond doubt is that the UK is on the map of international sporting hosts in a way that it wasn't for most of the previous decades.

Whether that delivers gold or base metal, we shall soon see.