Els route to Open win has been anything but 'Easy'

They call him the "Big Easy" but the journey for Ernie Els has been anything but simple.

The imposing South African with the silky-smooth swing clinched a dramatic second Open title 10 years after his first after Adam Scott's spectacular late collapse at Royal Lytham on Sunday.

The former world number joined an elite group of players with four major titles and has reaped untold riches from the game as one of the icons of his generation. But professionally there have been disappointments, while, personally, life is not straightforward either.

Els's son Ben was diagnosed with autism five years ago and the 42-year-old admitted he was thinking of him as he came from six shots back to beat Scott by one after the Australian bogeyed the last four holes on a dizzying day on the Fylde coast.

"I made a lot of putts with Ben in mind, because I know he's watching," said Els, who moved his family from Wentworth to Florida for better care for Ben, setting up the Els for Autism Foundation."He loves when I hit golf balls. He loves the flight of the ball and the sound. He gets really excited. I wanted to keep him excited so I made a lot of putts for him." 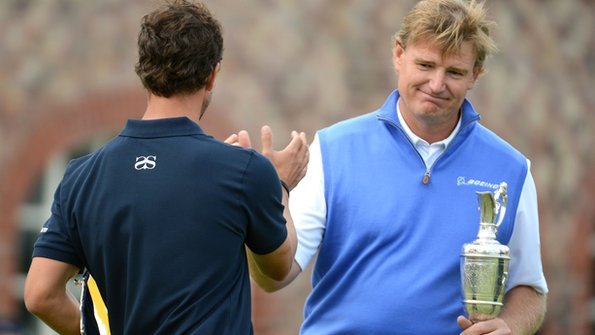 Ernie Els said on Saturday that he had a special feeling this week. Photo: Getty

Understandably, Els's focus was elsewhere for a time and his game suffered. It looked like his Muirfield victory in 2002 was the end of his major road. Being admitted to the Hall of Fame - usually reserved for those at the end of their careers - last year must have felt bitter-sweet.

He says he is only just coming to terms with balancing family life, charity life and his golf life.

"I think emotionally or mentally I'm in a better place than I have been in the last couple of years with the whole situation," he said, staring at the Claret Jug in his victory press conference.

Wins still trickled in, but even he admits a year ago he lost the belief he would win another major. That looked a decent prognosis after he missed his first Masters since 1993 having slipped out of the top 50 in the world rankings.

But his form did start to creep back with a more relaxed, positive frame of mind and the help of coach Claude Harmon, long-time caddie Ricci Roberts and a new outlook on putting under Dr Sherylle Calder. He lost a play-off in New Orleans earlier this year and briefly threatened before finishing ninth in last month's US Open.

Els said on Saturday he had a special feeling this week and mentioned it again with the Claret Jug sitting in front of him. The feeling extended to daydreaming while watching cricket on TV on Sunday morning that if he won he would thank Nelson Mandela. Now he has vowed to share a drink from the Jug with the former South African president.

"It's hard to explain," said Els, who, neatly, will defend his title at Muirfield next year. "For some reason I felt something good was going to come out of this.

"I think I've been in such a negative mode for a while, and now that I'm starting to feel more positive, obviously things happen."

Els won the US Open in 1994 and 1997 and topped the world golf rankings briefly in 1997 and 1998. He was lauded as the one to challenge Tiger Woods, but it didn't quite work out that way. He finished runner-up in the first three majors of 2000, two of them to Woods, and seemed to develop Tiger-itis. He has finished runner-up to Woods in more tournaments than to anyone else.

Els also lost the 2004 Open in a play-off to unheralded American Todd Hamilton, months after Phil Mickelson denied him a first Masters title with a birdie on the last.

For someone of his prodigious talent, he was seen as slightly underachieving. Until now, that is, proving careers should only be judged when they are over.

In all, Els has come second in six majors, among 29 top-10 finishes, which is why he can relate to Scott's capitulation at Lytham.

The 32-year-old, who up to then had never quite fulfilled his potential, led by four overnight and had not been challenged all day as nearest rivals Graeme McDowell, Woods and Brandt Snedeker faltered. A first major title was within his grasp and by the 15th tee most observers had awarded him the Jug. Instead, a drip, drip, drip of shots left him needing to hole from eight feet on the last to force a play-off with the waiting Els. He missed, and will forever be lumped with the likes of countryman Greg Norman, Jean van de Velde and Rory McIlroy as men who have blown majors in spectacular fashion.

"Greg was my hero when I was a kid and I thought he was a great role model in victory and defeat," said Scott. "I can't justify anything I've done. I didn't finish the tournament well and I'm obviously very disappointed. Next time - I'm sure there will be a next time - I'll do a better job."

For third-placed Woods, it should go down as a decent Open. Despite a triple-bogey on the sixth, he started the back nine with the flicker of a charge, the trademark from the old days. Eschewing the cautious approach he had adopted all week, he unleashed his driver down the 10th, igniting the huge crowd around the green with a stunning birdie. A long deliberation followed on the adjacent 11th tee, before he unsheathed the driver again. The gallery fizzed in anticipation. But he carved it into the right rough and the electricity spluttered out.

So Woods didn't win a 15th major or first since 2008 but he was back in the hunt. Jack Nicklaus, whose record of 18 majors he is chasing, didn't win every time either as 19 seconds proves.

McDowell has played in the final group in the last two majors and is increasing his chances of adding to his 2010 US Open title. And one half of the much-vaunted English challenge - Luke Donald - gave himself another look at what it takes when he edged into a fifth top five in majors.

But when we look back at the 141st Open Championship, we'll think of just two things: the resurgence of Els and sympathy for Scott.

"Just about everything that can happen in the game of golf, I've gone through," said Els. "I've done what Adam has done. So to sit here with the Claret Jug is crazy. And it comes from a good attitude, being a bit more relaxed and believing in yourself."