Sport never goes to script and it is all the better for it.

There we were wittering on about Rory, Luke and Lee in the pre-Open build-up.

But like an explosive thunderstorm clearing muggy air, Thomas Bjorn and then Tom Lewis took the tale in a fresh direction and relegated McIlroy, Donald and Westwood to subplots.

The 40-year-old Bjorn and English amateur Lewis, a man half his age, both fired 65s to lead by one shot after round one at Royal St George's.

First we had Bjorn. What a twist that was.

The last time the Dane set foot on Royal St George's in 2003 he was a broken man after blowing a three-shot lead with four to play.

But Lewis stole his thunder late on Thursday. Just when we were getting used to McIlroy as our latest sporting star, a new one may be born.

Lewis, who is dyslexic, took up golf at the age of four and left school at 16 to concentrate full time on the game. He won the British Boys Championship at Royal St George's in 2009 and made the Open field by shooting 63, 65 to win local qualifying at Rye. He plans to turn pro after the Walker Cup in September. 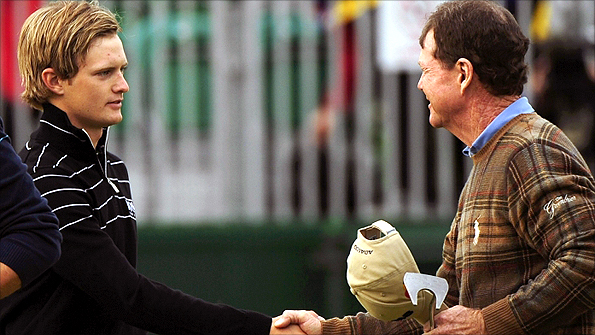 Tom Lewis and Tom Watson shake hands after their first round. Picture: Reuters

His father Bryan is a former European Tour pro who named his son after one of his idols, Tom Watson. His other son is named Jack.

Tom Lewis, who shares his hometown of Welwyn Garden City with six-time major champion Nick Faldo, has been paired with 61-year-old Watson for the first two rounds at Sandwich.

But as a fan himself, young Lewis was desperate not to embarrass himself in front of the five-time Open champion. As it turned out, he became the first amateur to lead the Open since Michael Bonallack in 1968.

Watson called Lewis's play refined and said: "I have to smile inside to watch him play."

Lewis came up through the English Golf Union and R&A amateur system and has been coached for four years by Pete Cowen, the man behind players such as Lee Westwood, 2010 US Open winner Graeme McDowell and defending Open champion Louis Oosthuizen. He also works with Westwood's fitness coach Stephen McGregor.

Lewis, who said his father is "too nervous" to come this week, showed poise, diplomacy and humour despite admitting he was nervous as he sat in front of a packed press conference.

"I see myself as looking up to everyone because you've got to respect everyone you possibly come across in the world, no matter who they are," he said.

And he paid tribute to his parents and family for sacrificing so much to support him.

"I've had to have great support from brothers and sisters for a lot of money going into me. It's excellent, and without them, I wouldn't have had the opportunities I had. Hopefully their sacrifices will pay off long‑term, but if not, then they're still poor," he added.

Asked who his influences were, Lewis replied: "I could name loads, but I'd be here all night."

He then mentioned McIlroy, Tiger Woods, Watson and David Beckham.

Why Beckham in particular?

"Nick Faldo has won six majors. I would love to win seven because I'm from the same golf club as him and it would be great to go down as the best player from the club," he said.

"David always used to wear seven and I loved the way he played football, and I just loved to replicate it. So that's probably why. And he's got cool hair."

England's new star is already targeting Northern Ireland's young maestro in what would be a European duel to match the Woods and Mickelson era. Or Watson and Nicklaus for that matter. Throw 18-year-old Italian Matteo Manassero, a partner of Watson's in the 2009 Open, into the mix and you have quite a cocktail.

"Rory will definitely get to world number one at some stage in his career," said Lewis. "Hopefully I can get to the same standard and have a few battles with him. That would be a dream."

For now, though, he insists he is just concentrating on maintaining his challenge for the Silver Medal.

"Golf is a four‑day event, and tomorrow is the most important day for me," he said. 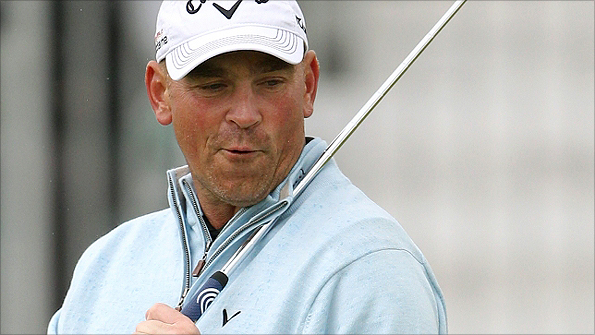 Thomas Bjorn enjoyed his opening round at the 2011 Open. Picture: AP

Bjorn is also aware how quickly the glory can come and go, but he insists he has got over his 2003 collapse, which included a triple-bogey six on the 16th.

A complex character, his career has been up and down but after only making the field on Monday evening, his latest revival has added poignancy. He is playing in his first major since his father died in May.

"He meant a lot to me," said Bjorn, choking back the tears. "He would have been very proud of what I did today."

But as Bjorn knows all too well, and Lewis could find out, the Claret Jug only gets handed out after 72 holes on Sunday. And Royal St George's is not a place to rest on your laurels.