Colin Montgomerie vowed to leave "no stone unturned" in his quest to regain the Ryder Cup for Europe and in the end it proved just enough.

Monty's men got off to a start as dazzling as the newly discovered Welsh sunshine as the tournament that had threatened to become the dud in the mud moved into an unprecedented fourth day.

Europe raced into the lead in eight of the 12 singles matches early on, needing five points to seal the win.

But as they edged towards their target, a gritty American team put the party on hold and ramped up the tension.

Montgomerie was meticulous in every part of his planning and the positioning of Graeme McDowell, the US Open champion, in the singles anchor role was no accident. It was the last piece of Montgomerie's jigsaw and it illustrated the big picture.

When America's 21-year-old superstar Rickie Fowler birdied the last four holes to scrape a half against Edoardo Molinari, it meant the match would come down to the last group.

McDowell was one up against Hunter Mahan with three to play and needed to win his match - with the score tied at 13.5-13.5, a half would have given the Cup back to the USA. 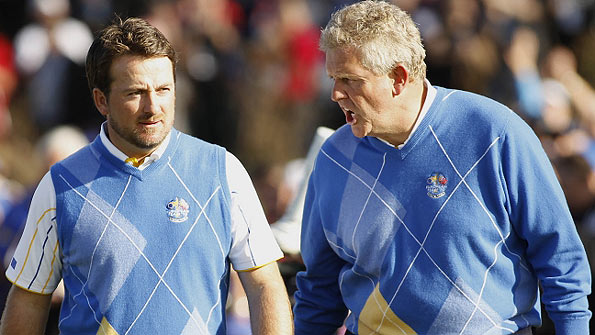 And the Northern Irishman drew on the experience he gained in the pressure cooker of the back nine at Pebble Beach when he held off the world's best to win his first major in June.

McDowell won the 16th with a brave birdie and held his nerve on the short 17th as the world of golf watched with bated breath. McDowell flirted with the bunker, Mahan drove short. But the American fluffed his chip, McDowell chipped on to a few feet and Mahan stuck out his hand.

As one, the European team mobbed the green to kick-start the festivities and bring to an end to one of the greatest of Ryder Cup days.

"I can safely say I've never felt that nervous on a golf course in my life," said McDowell. "It's another stratosphere compared to Pebble Beach." (Westwood revealed later McDowell had told him he could barely hold his club).

Montgomerie claimed the victory was entirely due to his players, arguing he hadn't hit a shot.

And the whole team played a part, with everyone chipping in at least half a point, as Luke Donald and Ian Poulter gained three points out of four to top-score for Europe.

But McDowell was quick to pay tribute to his captain, who was Europe's talisman as a player and is now one its finest captains.

"He was amazing. He's everything that is the Ryder Cup and to be able to do that for him was very special," said McDowell.

Some of the tactics of captaincy - the art of who to play and who to leave out in each session - were removed by the re-formatting of the competition due to bad weather.

But the pairings still had to be right and the inspiration and the message hammered home.

It was Montgomerie's "rocket" on Saturday afternoon that changed the complexion of the match. The USA had enjoyed a good morning session and led 6-4 but Europe hit back to head all six matches on course overnight.

But it was Sunday's resumption that really laid the foundations for victory as Europe went on to win five and a half points out of six to lead 9.5-6.5 going into the singles.

"That session was our demise," said American Jim Furyk.

Montgomerie surrounded himself by experienced Ryder Cup men as vice-captains to share the load and act as sounding boards.

The choice of first three, then four and then five assistants - he finally drafted in Jose Maria Olazabal from his corporate role - was in stark contrast to Nick Faldo's choice of just one in the doomed Valhalla venture in 2008. And the team they created was harmonious, energetic and passionate.

The brains trust agreed on the all-important singles order and the plan came off, precisely. Almost too precisely as it turned out. This was a time when sprinkling the strength through the team worked, though Montgomerie was at pains to say they were all strong. But hindsight dictates that singles orders are always right when you win, wrong when you lose.

A captain can do nothing without the players, but a good captain is also a lucky captain. Pavin did little wrong and missed out on keeping the Cup by half a point.

Forget the omission of Stewart Cink in the opening ceremony, or the ridiculous criticism of his use of F16 pilot Major Dan Rooney for motivational purposes. Pavin, who also had a strong back-room team, was as understated as Montgomerie was larger-than-life, but no less a captain for it.

The fact that his team fought to the last is proof. His choice of Mahan, the top-scorer two years ago, as anchorman was as carefully plotted as Montgomerie's choice of McDowell. Fowler, who was playing in the amateur Walker Cup last year, as a wildcard was also an inspiration.

The Americans in the past have been accused of not caring about the Ryder Cup. But the 12 players, plus, Pavin, were devastated in their news conference afterwards.

Mahan broke down in tears and Mickelson deflected further questions from him.

"I've never been as happy as after winning [the Ryder Cup] and I've never cried after losing in anything else," said Furyk. "I'm glad maybe finally you [the media] have all figured it out."

The build-up, the "phoney war", was filled with the twists and turns of Rory McIlroygate, after the 21-year-old had the temerity to suggest he might fancy playing world number one Tiger Woods. He didn't get his wish, but grew again as a player. McIlroy's past comments likening the Ryder Cup an "exhibition" also came back to haunt him. Afterwards, though, he insisted: "I truly believe that this is the best competition in the world."

Montgomerie took flak over his choice of Padraig Harrington as a wildcard. The Irishman won two points out of four matches, but Montgomerie claimed he was invaluable to his team. "There is method to this," said the Scot.

Pavin, meanwhile, was quizzed constantly over the form of Woods and Phil Mickelson, the world's top two players for some time, but a somewhat misfiring presence at Celtic Manor.

But Woods ended as joint top-scorer, largely due to his partnership with the equally successful Steve Stricker. And he clinically snuffed out the hopes of Francesco Molinari with a 4&3 victory in the singles. Mickelson gained the dubious honour of becoming the most defeated player in US Ryder Cup history, but he beat Peter Hanson convincingly to keep America's dream alive.

Wales' big show, which cost Celtic Manor owner Sir Terry Matthews about £150m to put on, was marred by the weather and very nearly curtailed because of it. Thankfully, the integrity of the competition remained intact with all 28 matches played to a conclusion.

But the scheduling will have to be reviewed in years to come. It can rain at any time, but October in the UK is asking for it.

Celtic Manor, though, will always be remembered as Monty's Manor (he's already got his name on a course here).

He crafted a victory against a powerful American team and then vowed this would be his one and only shot at the job.

Harrington said: "We wanted to guarantee his captaincy did his playing career justice."

Pavin also shed a tear as he saw his two-year dream die. He, too, is unlikely to be back at Medinah in 2012.

"Each of my guys played their hearts out. But you guys [Europe] played better than us. Just by a little bit," he said at the closing ceremony.

But it's the little bits that count, and that's where Montgomerie probably had the edge.