Trying to ketchup with the Flying Tomato

Most know him as the "Flying Tomato", some prefer "Red Zeppelin". I would suggest the "Scarlet Pimpernel".

Shaun White, the snowboarder with the long red locks, is back to defend his Olympic half-pipe title, after winning gold as a 19-year-old in Turin.

White was already a big name in 2006, a twin snowboarding and skateboarding prodigy. Now he is a global icon. A one-man brand.

The American is reputed to earn $9m a year through endorsements alone. He has more than 684,000 fans on the social network Facebook and more than 100,000 followers on Twitter.

He's a man in demand, and because of that, he's rather difficult to pin down for a chat.

We tried, of course, but more of that later.

White is largely credited with progressing half-pipe snowboarding more in the past 12 months than anyone else has managed in the sport's history. 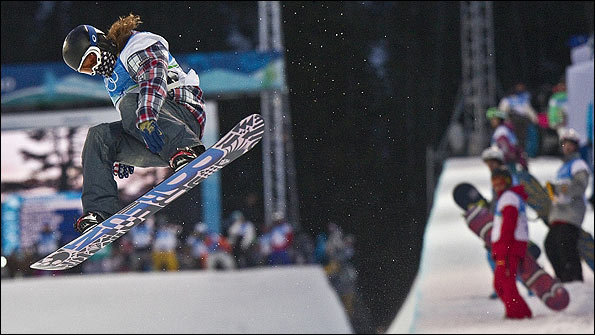 All eyes will be on the American in the half-pipe. Photograph: AFP

The Californian has been pushing the boundaries of what is possible, even having a huge private half-pipe - dubbed Project X - built by sponsors on which to hone his bag of mind-blowing manoeuvres.

Driving himself on alone in a remote part of Colorado, White has pioneered the double McTwist 1260, a terrifying double back flip while spinning around three-and-a-half times. He has also been at the forefront of developing variations of the double cork, the previous benchmark of insanity.

"When I used to try double corks I would be so nervous and my hands would shake," he said. "Now guys are doing three in a run." Not that they are easy, though. His biggest rival, Kevin Pearce, is still in hospital after a double cork went wrong on New Year's Eve.

Neither is White immune to failure. At last month's Winter X Games, the annual extreme sports jamboree, White hit the lip hard trying to land a double McTwist. His helmet flew off and he rode dazed into the finish. But he pulled off the trick successfully in his final run and won the event for a third year in a row.

"That trick is my best friend and worst enemy," said White, who is also a Summer X Games gold medallist on his skateboard.

Armed with this explosive arsenal of tricks, White is happy to admit that he goes into the Olympics as the red-hot favourite.

"I think I might be," he mused at the US half-pipe team news conference here in Vancouver. "I can feel confident in saying that. But I definitely think every day is its own day."

White, resembling a King Charles spaniel with his red hair tumbling down under an oversized baseball cap, was keen to stress that despite all his fame and riches he is still the same humble guy who began skiing as a six-year-old on road trips with his mum, dad, brother and sister.

"We all travelled in a van, staying in motels, making food and letting off fire alarms," said White, who insists the "Flying Tomato" nickname is dead, preferring "Animal" after the red-haired drummer from the Muppets.

"I wouldn't trade anything in the world for it because that's where I came from. I'm glad the money hasn't changed me. I'm pretty sure I would have been corrupted a long time ago if I was going to go down that path. When I go back home to see the family I still have to clean up after the dog and stuff. I'm a pretty relaxed normal guy."

But while White may be unchanged as a person, his circumstances are vastly different.

Four years ago in Turin, my colleague Anna Thompson told me she was able to have a relaxed natter with him after a training run.

At these Games, White's is a micro-managed, corporate-controlled existence.

One-on-one interviews were a definite no-no after the news conference, but BBC snowboarding commentator Ed Leigh had a trick up his own sleeve.

He had arranged to speak to one of the favourites for the women's half-pipe, Gretchen Bleiler, up at Grouse Mountain outside Vancouver that evening. White would also be there for a sponsors engagement. Maybe, just maybe, we could grab an impromptu chat on camera up there.

But scurrying out of the media centre, Ed and I spotted White standing unguarded in the lobby. Trouble was, cameraman Chris had gone to get the car. We were weaponless.

Pulling into the Grouse Mountain car park in the dark and spitting rain, we ran across to the cable car that would take us up to the base lodge. On the way, we spotted White and implored the lift operator to hold the car. As one, the possibility dawned on us. White was about to be served up on a plate, trapped in the same cabin with no escape route.

The lifty knew it, too. "I'm not going anywhere until White shows up," he said, showing us his snowboard that he had stashed in the corner to be signed.

Ed composed himself, Chris readied his kit, I looked out. Then, like a young prince flanked by his courtiers, White approached. "Here we go fellas," said Ed. But the light in the cable car suddenly went out. Not an electrical fault, but a giant of a man - appropriately named "Tiny" - quickly and unceremoniously booted us out.

"It was too good to be true," we all said at once as we waited for the next cabin.

Up top, White was nowhere to be seen, but apparently he was in and out while we interviewed Gretchen. We packed up slowly and resignedly made our way back down.

Stepping out into the now soaking wet night, we almost bumped right into White signing some autographs. But before we could react, he was bundled into a giant SUV and spirited away.

And as if to taunt us, who should we pull up next to at the lights 10 minutes later? You've got it. "He must think we're following him," said Ed. "We are," said Chris. But our chance had gone, and we drove quietly back to the office to put together our pieces from the day.

The "Scarlet Pimpernel" had eluded us again. But whether it's "Animal", "Flying Tomato", "Red Zeppelin", whatever guise White turns up in for the half-pipe, be ready to have your minds McTwisted.