"If you're ready to rumble in the jungle, we'll be on the tee on Friday morning."

European captain Nick Faldo laid down the challenge to opposite number Paul Azinger in the opening ceremony for the 37th Ryder Cup on Thursday.

The phoney war is now all-but over, but in the last act before battle commences in earnest, the home side claimed a final PR victory.

Fans thronged Valhalla's practice ground, like a summer music festival crowd, to get a glimpse of the action on the stage.

A warm-up band and a piper formed the pre-ceremony entertainment, while two European caddies ran across the official carpet at the last minute clutching bags of beer for their pals.

Some bigwigs made speeches, kites were flown (and cheers raised when one was rescued from the trees) and banners twirled before NBC anchorman Dan Hicks introduced the former US and European Ryder Cup captains.

Marching bands followed, before a party of dignitaries brought in the Ryder Cup trophy itself. 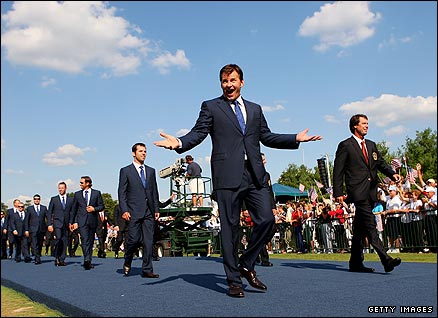 Eventually Faldo and Azinger led in their sides in tandem, the Americans in dark suits, the Europeans in blue.

A bit more flannel ensued from other, less famous people, in suits before Faldo was introduced as the European all-time record Ryder Cup points-scorer. The camera panned in on the Englishman and you could see him muttering, probably saying, "I'm the all-time, all-time record points-scorer."

Faldo's opening remark was an off-the-cuff line about how "it's always good to get the running order right". No one understood what he meant and some cringed.

But he redeemed himself with some nice words about Kentucky, meeting Muhammad Ali and the obligatory thanks to the Valhalla greenstaff (even schoolboy golfers at junior level know to start a golf speech with this one).

Faldo, once the iceman for his singular focus, was very visibly nervous and after introducing the wives and girlfriends and his family, he was ready to introduce his team in alphabetical order.

"The man with the Popeye arms and Robbie Williams looks, expect him to entertain you this week, ladies and gentlemen, Paul Casey."

OK, we thought, not bad, this could be fun. But then Faldo introduced Soren Hansen as Soren Stenson and asked Graeme McDowell, "Are you from Ireland or Northern Ireland?"

It's not Faldo bashing for the sake of it, but there are sensibilities to be aware of.

He did, though, end with a good, if slightly cheesy line. "We may look like we have just floated in like a butterfly, but I can assure you we'll sting like a bee."

Azinger also began with platitudes to family and friends before also thanking the greenkeepers. (If you ever have to make a speech and you dry up, just thank the greenstaff and the ladies in the kitchen for a marvellous spread.)

But he seemed assured and spoke of how the match would be played competitively but in a spirit of friendship, a politically clever move to dampen any notion that Valhalla might turn into a bear pit in Sunday (it might).

Azinger's trump card, though, was his rallying cry to the crowd.

"I think you, the fans, will be a critical component. You will be our 13th man."

He then turned to his team and simply introduced each by name, home town and state.

In terms of PR, it was a final coup for Azinger, and a less than sparkling performance from Faldo. But after Europe won the charm offensive in the build-up - forgetting the storm-in-a-teacup that was "sandwichlist-gate" - it's probably time to call it quits.

After some anthems, Faldo and Azinger revealed their pairings for Friday's opening foursomes live on TV:

"We stick the peg in the ground on Friday morning and then the real stuff starts," said Faldo.

Quite. It's time to rumble.