Two years ago Europe was basking in the glory of a third straight Ryder Cup win with just the odd thought for whether Nick Faldo's side could keep the run going in 2008.

Six months ago the idle speculation moved up a gear and in the last few weeks the debate has reached fever pitch.

But this weekend, Europe will take on the US in the 37th Ryder Cup at Valhalla in Kentucky with trans-Atlantic bragging rights once more at stake.

Captains
Europe's Nick Faldo is a six-time major winner and the highest points scorer in the Ryder Cup. Whether the single-minded focus of his playing days can translate into gelling a team remains to be seen. Jose Maria Olazabal is his vice-captain. 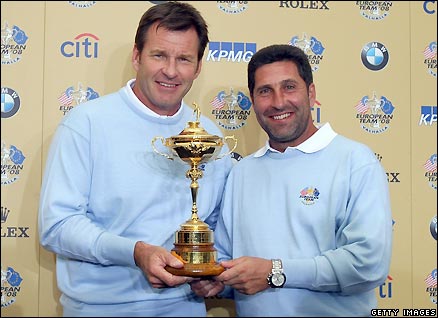 America's Paul Azinger is a tough-talking scrapper and ultra-competitive. The four-time Ryder Cup player, who beat off cancer in the 1990s, has no qualms about ruffling feathers. Has Dave Stockton, Raymond Floyd and Olin Browne as deputies.

On-course lieutenant
Ireland's Padraig Harrington is the hottest property in golf with back-to-back major wins at the USPGA and Open this year to add to his 2007 Open triumph.

Phil Mickelson, the world number two, will lead the US in the absence of the injured Tiger Woods and much rests on the shoulders of the man they call "Lefty".

Go-to man
Lee Westwood and Sergio Garcia top-scored for Europe in the last two Ryder Cups. Westwood, unbeaten in his last 10 matches, has won 15-and-a-half points. Garcia has only lost four times in 20 Ryder Cup games and stands on 15 points.

For the US, Mickelson and Jim Furyk have poor records, while Stewart Cink, Chad Campbell and Justin Leonard haven't been exactly stellar and Kenny Perry has lost both his matches.

Flashpoints
Where to start? Faldo and Azinger have been sparring ever since the Englishman pipped the American to the Open title in 1987. Faldo riled Azinger with a "tough luck, old boy" comment and the fuse was lit for several more Ryder Cup clashes. Azinger once called Faldo a "prick", while Seve Ballesteros once said of the US team, "The Americans are 11 nice guys and Paul Azinger". The niggling has continued - though embellished for comedic effect - in their roles as co-commentators with US TV. The Ryder Cup has been very gentlemanly since the "Battle of Brookline" in 1999 but sparks could fly once again at Valhalla. 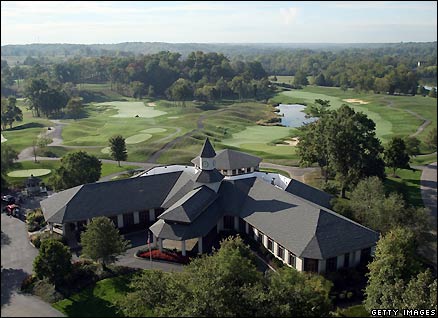 Among the players, the outspoken Ian Poulter for Europe and spiky American Hunter Mahan could provide some fun and games.

Crowd favourite
Garcia is the heart and soul of the European team. His infectious enthusiasm, overflowing energy and love of beating the Americans lifts team-mates and supporters alike. The US will look no further than Kentucky locals JB Holmes and Kenny Perry to fire up the Valhalla crowd.

Dark horse
He may have been a surprise winner of the Open in 2003, but Ben Curtis has matured into a force to be reckoned with. For Europe, Robert Karlsson may not have the aura of some, but won in Germany on Sunday and has been on form all season.

Style guru
The Ryder Cup has long been a graveyard for fashion - remember the US shirts featuring past heroes at Brookline? Individual style is normally stifled by bland team uniforms but word is that Faldo has got some trendy threads under wraps.

The colourful Poulter, who has his own fashion range, will just have to make his mark in the spiky hair department.

America's new kid on the block Anthony Kim is partial to a "statement" belt buckle - often his intials "AK" - and may just be able to squeeze one under the radar. But Boo Weekley may have to leave his trademark long-sleeved camouflaged T-shirts at home.

Muscle men
In Holmes, the US have got a big hitter who could just add something extra in his matches. Holmes is tied second (with Robert Garrigus) on the PGA Tour driving distance stats with an average drive of 310.9 yards. (Bubba Watson is top on 315). But Europe have their own power rangers with Paul Casey leading the way at 299 yards.

Most likely to get stopped by the stewards
Mansfield's Oliver Wilson and Dane Soren Hansen are the least known faces on the European side and may have to proffer their ID a touch more in the early stages. 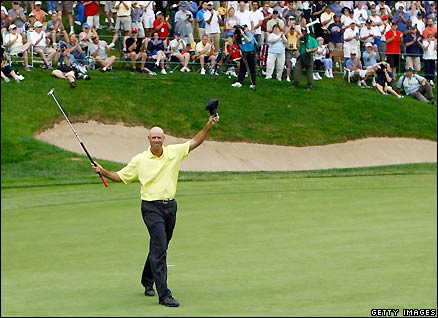 Stewart Cink might be the world number 11 with his baseball cap on but without it, his balding pate suggests a lightly tanned accountant.

Bon viveur
Miguel Angel Jimenez requested cigars, rioja wine and a coffee machine in the team room at the 2004 Ryder Cup. At the other end of the spectrum, Weekley is never happier than when huntin', shootin' and fishin'. "It's nice to say I got to play in the Masters," he said of his Augusta debut this year. "But it's still golf. If I shot the biggest buck or caught the world's largest bass, now that's something I'd cut my right arm off for."

Most likely to be heard/least likely to be heard
"Get in the hole", "You're the man" or "Be the ball" are the favourite cries from the less cultured section of the US golf gallery and will be issued ad nauseam, the former even for a drive on a par five.

"Come on Monty/Darren/Tiger" are the least likely, unless in a waggish, ironic sort of way.

Key holes
A 601-yard, par-five 7th is a classic risk-and-reward hole. Play safe and get up in three, or cut off the dog leg and hit to a thin island fairway, leaving a long second shot over water to the green. The 13th is another "shall I, shan't I" test. The 352-yard par four could tempt the gung-ho to go for the island green off the front tee.

Any other business?
How could we get this far without mentioning the wives and girlfriends? To some, the "wags" have become an indispensable part of the week, to others an over-important sideshow. Faldo has chosen his third ex-wife Valerie Bercher to lead the European gals.