The Louisville Lip will shoot from the hip and give you the inside track from Valhalla.

From quirky quips to gossipy bits, we'll provide colour and the odd touch of glamour.

By Rob Hodgetts and Alex Trickett

No charm - and that's offensive
There's discontent among the galleries at Valhalla and it seems one man's at the root of it.

Word from the fairway is that US superstar Phil Mickelson is ruining captain Paul Azinger's charm offensive, and angering plenty of autograph hunters, by refusing to scrawl his name.

His team-mates are at it and the Europeans are positively tripping over each other in the rush to put pen to paper/shirt/cap/bag/flesh.

Now, the Lip didn't follow him all the way around on Wednesday, so we can't categorically state that he didn't sign any, but various sets of fans at different parts of the course had the same complaint.

"I can't see what Mickelson's problem is. It wouldn't take much, would it?" said golf fan Nigel Tatlock from Derbyshire. 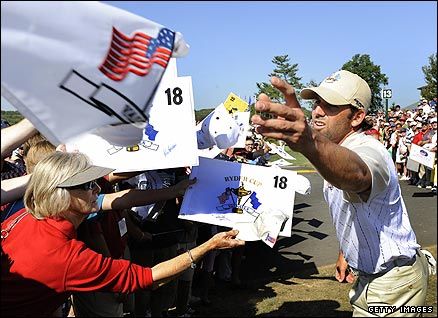 The big crowd puller, even for US fans it seems, is Sergio Garcia, followed, for the Europeans, by Padraig Harrington.

But Garcia's the man, and he has developed his own unique style. He continues walking and then, after searching despairingly for the owner of said piece of paper/shirt/cap/bag/flesh (OK, not the last one in this case. Go figure), he flings it willy-nilly into the gallery.

Golf etiquette being what it is, though, the real owner is always reunited with it.

Plenty of fans are competing to get both team's signatures on replica flags of the 18th with the Ryder Cup logo on. And there's certain techniques needed to ensure yours is the flag that gets signed.

"Sergio, you're very handsome," cried one lady. "You've got to stand near a female or a kid," said another.

But the game comes with it's own set of problems.

"I've already got Henrik Stenson but I bet he comes back over here," said a man from Boston. "I'll have to tell him, no thanks."

Will the real Ian Poulter please stand up?
Ian Poulter is a man at ease among the galleries and clearly relishes the attention.

But he can barely disguise his contempt for the media.

In his first news conference at Valhalla, much of the questioning revolved around Poulter's controversial (to some) pick as a wildcard and his decision not to travel to Gleneagles for the final qualifying event.

Every time a question along those lines came up, Poulter's eyes shifted this way and that, he shook his head with a wry smile, and then composed himself to try to answer without bridling too much.

Trying to lighten the mood a bit, one questioner asked whether his team-mates have indulged in a bit of mickey-taking after Nick Faldo's Del Boy impression from Only Fools and Horses when he told him the news that he was on the team. ("Oi, Raquel, get your coat, you're going to the Ryder Cup.")

Poulter gathered himself before launching into another bland answer about how everyone in the team room is great and gets along well.

The questioner butted in after a while and said, "No, sorry, you're taking it a bit too seriously. Have the others picked up on Raquel?"

Eventually Poulter conceded that his team were having lots of laughs together.

Now, obviously Poulter got burned a bit over his "It'll be just me and Tiger" comments and is wary of the hacks.

But his smirk and swagger as he left the dais did nothing to soothe relations. If you're reading Ian (If? Of course you are!) you'll find yourself much less of a target if you can just chill out a bit.

Rumble in the...museum
Some behind-the-scenes news for those of who love to know what's going on off the course.

The two teams are both staying at The Brown hotel in downtown Louisville. The European and US caddies had a fairly raucous dinner together on Monday night. There is the big gala dinner with both teams on Wednesday night.

And for fans hoping to get involved in a spot of collective revelry, Fourth Street in Louisville is the place to head for over the next few nights.

Finally, the European team ate at the Muhammad Ali museum on Tuesday before trying out some of the interactive shadow boxing against video images of "The Greatest". 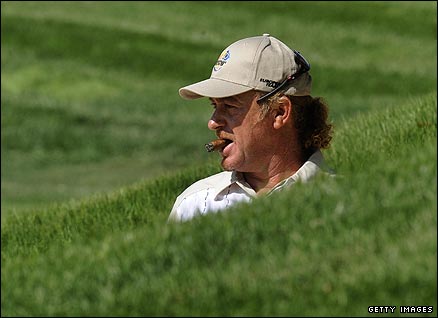 No, pony-tailed Spaniard Miguel Angel Jimenez, complete with smoking stogie lodged firmly in the side of his mouth.

Apparently, the sight of the portly one dancing like a butterfly and cuffing the video Ali around the back of the head was pure comedy gold.

BBC at the BBC
In a supreme display of brand solidarity, your BBC bloggers popped into the BBC (Bluegrass Brewing Company) for a Bison Bacon Cheeseburger and a Brewed Beer (Chilled), on the way back from Valhalla on Tuesday night.

The bar was filled with Big Burly Chaps, many talking golf while watching the Brewers Beaten by Cubs in baseball. After a tough day on the course, it was just the job - Bloody Brilliant, Cheers!

American dream
The inaugural commendation for bare-faced commercialism goes to all the residents around Valhalla, who are renting out their properties at 20 bucks a time for car parking. Never mind mum's prize-winning azaleas or dad's precious turnip patch, every square inch is fair game this week.

I fully expect to hear the following exchange before Sunday's finished:

Driver: "Howdy, room for one more?"
Land owner: "Sure, you can park your eight-wheel stretch tank in my front room. Just wipe your feet as you step out."

Country croon
Country musicians wear their hearts on their sleeves and we're on the hunt for some choice quotes. Here's our opener: "I've got a BBQ stain on my white T-shirt. Girl you're killing me with that mini-skirt" (heard on radio station Q Country en route to Valhalla - bonus points for anyone who can tell us the singer).