By Rob Hodgetts and Alex Trickett

Watch out, watch out, there's a Harrington about
Late on Wednesday afternoon, as crowds began to disperse, players added the final touches to their short games and autograph hunters scrambled for the last few names in a feeding frenzy around the putting green, one man danced to the beat of his own drum.

Europe's triple major champion Padraig Harrington and caddie Ronan Flood grabbed a buggy and hared off up the 1st, away from the clamour and hoo-ha around the clubhouse.

On the deserted green, the pair paced out yardages, gesticulated at various spots and fell into discussion with plenty of pointing, before Harrington splashed half a dozen balls from the greenside bunker.

Work over, Harrington picked up the balls and they drove off in the direction of the 2nd. Sadly, that's all Lip saw of the great man. We're fit but have you ever tried giving a golf buggy, driven by two Irishmen, a 500-yard headstart?

But Harrington's extra-curricular activities - a testament to his dedication - became even more pertinent when Graeme McDowell and Henrik Stenson completely misread the break of their putts from the back of the 1st green during Thursday morning's practice round. Should have been out with Paddy.

Show stopper
Great comedy was to be had on the range before Thursday's final practice. As the warm-up act, a voice from the crowd shouted out, "Nick [Faldo], hit a few for us," at which El Capitan clutched his back and began limping up and down in a passable Quasimodo impression. 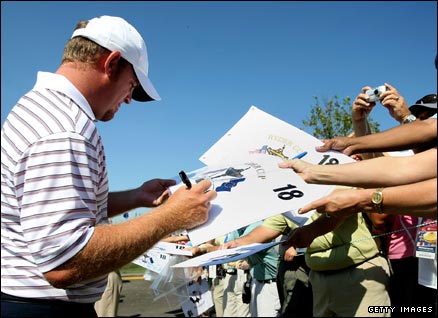 But big-hitting US favourite JB Holmes was the star of the show, arriving to American yells of "Yeah, JB, go JB, you're the man JB."

First, Holmes whipped out a three-wood and began dispatching missiles into the distance, landing them just short of the opening ceremony stage at the far end of the practice ground. Then he took to picking out workers in the distance, first bombarding a couple of men in red shirts before chasing a far-away policeman with his barrage.

But the encore was the best. Encouraged by his faithful, Holmes unleashed the driver and boomed one high onto the roof of the stage to cheers, wolf whistles and plenty of high-fives, while US captain Paul Azinger did that "we're not worthy" bow thing. JB raised one arm in salute and walked off the range. Quality.

Meeting Muhammad
The European team were playing foursomes on the front nine as part of their final practice and Paul Casey, Stenson, McDowell and Miguel Angel Jimenez were halfway down the 2nd.

Lip decided it was time to head back and had reached the 1st before vice-captain Jose Maria Olazabal and Jimenez screamed past in a buggy. "What's going on?" Lip thought. "Is he injured or ill? Does that explain why Germany's Martin Kaymer, who just missed out on qualification, is sporting team colours and walking with the group in his role as travelling reserve?"

At that point, several more carts zoomed past, packed with Europeans and caddies, bound for a rendezvous with the rest of the team on the 1st fairway.

None of the spectators were quite sure what was occurring until another cart drove up with the legendary Muhammad Ali, shielded from the blazing sun under an umbrella, in the front seat. 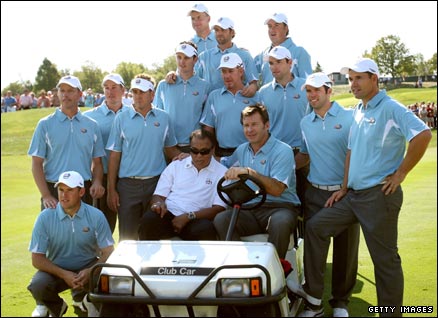 It was clearly time for a European audience with the great man and Ali posed for group pictures with the team before the players joined him one by one for individual snaps.

One British wag piped up from the gallery: "Faldo probably thinks he's come to see him."

VIP dinner date
The European team received a heroes' welcome from a small but patriotic crowd of visiting fans as they arrived for the Gala ("Gar-la" in English, "Gay-la" in American) dinner at Louisville's Convention Centre.

The players, in dark suits and ties, were required to de-bus one by one to be formally announced.

Sergio Garcia, one of the team's singletons, received the biggest roar followed by Lee Westwood and the popular Miguel Angel Jimenez.

Mrs Poulter was absent as she is pregnant, while Graeme McDowell and Jose Maria Olazabal were also unattached. But the Lip can report that the rest of the WAGS looked stunning.

Inside the players were again introduced to the massed ranks of besuited dignataries, the Americans in qualification order, the Europeans in alphabetical order.

Apparently there was some furore when some VIPs discovered they weren't actually dining with the players.

The Lip wouldn't know, though. We'd legged it to our own VIP dinner date with 5 Live royalty Invers, Pougers and Muzza.

Irish eyes frown
On the subject of Ali, while the Lip was having an audience with its namesake on Wednesday evening, a strange thing happened.

It was not quite as strange as the sight of Ali sitting back and watching his "Louisville welcome/Ryder Cup handover to Wales" party brought to a close by the city's finest Scottish bagpipers. But it was strange nonetheless.

Part way through the formalities, one of the six flags (and we're not talking US amusement parks) blew over in the wind. As the American, Canadian (not sure how they fit into the Ryder Cup picture), Welsh, British and Scottish flags stood proud, the Irish flag tumbled.

Bad portents for the week ahead? Let's hope not for the sake of Harrington and Europe.

Lip service
One half of the Lip has made a splash in Louisville's local paper, The Courier-Journal. We quote their quote of the day: "I knew I was in America when I ordered a beer at Chicago airport and was asked for ID... on my 37th birthday."

Now where have we heard that before...

Country croon (part two)
Following Wednesday's contender for best country music lyric of the week, here's Thursday's entry written for and sung to Ali by Texas crooner Dustin James. [You can see photos or him, Ali and assorted Valhalla punters on our Flickr feed].

"When you hold all the aces, there ain't no need to bluff.

He should get together with Kenny Rogers and his mate The Gambler - I hear they know a thing or two about cards.

A propos of nothing in particular the Lip was tickled by a brilliant look-alike while out and about at Valhalla.

For a second there, we thought the late, great comic actor John Candy was still alive and plying his trade for the Louisville constabulary.

If you have got any Ryder Cup lookey-likeys (other than Nick Faldo/Harrison Ford which is too obvious - we'd love to hear them.)