No shame to European defeat

It was fun while it lasted. But Europe's attempt to win a fourth straight Ryder Cup came up short because they faced a US team playing with the freedom that so often goes with underdog status.

And because astute US captain Paul Azinger inspired a new crop of young American stars to energise both the crowd and their more illustrious team-mates.

"The young guys infused amazing energy into the crowd and also into the team,and won probably the majority of the points on this team," said Furyk.

Europe came second because on a dramatic final day, the breaks went the other way.


Captain Nick Faldo's side were always on the back foot after going three points behind on "USA" Friday. And despite shaving a point off the deficit on Saturday to go into the singles 9-7 down, it proved to be too big an ask against such spirited opposition to win the seven points needed to retain the cup.

If the knives come out for Faldo, those brandishing them are failing to see the big picture.

"Let me just say, we hold the golf clubs and we play the shots," said Westwood, jumping to the defence of his captain during some tough questioning in the team news conference.

He will get a hard time for the order in which he sent out his players in the singles. But he shouldn't.

Just because the match was lost before star men Graeme McDowell, Ian Poulter, Lee Westwood and Padraig Harrington in the last four groups could have a say, doesn't mean Faldo made a mistake by not "top-loading".

There were no weak links in this side. And Europe won two-and-a-half points from the first four matches. How could anyone know the normally dazzling Sergio Garcia would fold so limply against Kim? The Spaniard may have had a poor week but you couldn't predict with any certainty he would lose on the 14th.

Where the match was lost was in the middle of the singles order with Perry, Weekley and Holmes setting up Furyk to win the Cup in game eight.

But any of those matches could have gone either way, and it is by fine margins that these things are decided.

If Hansen, all square after 15, could have survived to take Holmes down the last and scrape a half point, it would have brought the final matches into play.

And that may have vindicated Faldo.

As it turned out, it wouldn't have been enough anyway, because even if Hansen had halved to make it 14-10 to the USA, Europe would have needed to win all four remaining matches to retain the Cup.

And though McDowell and Poulter won, Westwood and Harrington lost, though we'll never know if those results would have been different if the match was still alive.

In the final analysis, the popular notion that Faldo would be unable to shake off his once single-minded focus and unite a team proved groundless. And his major decisions were pretty much proved right. 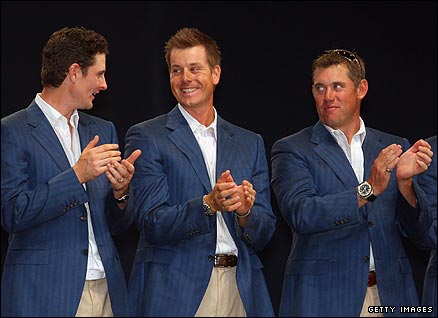 And his dropping of Westwood and Garcia from Saturday morning's foursomes - sparking controversy at the time - also worked out for the good.

"The session we were rested from, we won, so Nick wasn't wrong," added Westwood.

Faldo's manner angered certain sections of the media this week, with his tendency for flippant remarks or habit of making jokes at the wrong time. But that's Nick Faldo. All of us have our quirks.

His opening ceremony speech also drew ire, not least in this blog, for getting players' names and nationalities wrong. For that there was no excuse. But Europe didn't lose the Ryder Cup because of a speech.

Faldo was also repeatedly asked whether having just once vice-captain was right. But he was happy that between himself, vice-captain Jose Maria Olazabal and the older members of his team there was enough experience kicking about.

Azinger had three assistants and split his team into smaller units of four players with a captain for each. He also admitted the revamp of the selection system, including having four captains picks, was crucial.

Overall, the event was magnificent - hard-fought, tense and fiercely competitive, but conducted in superb spirit.

The much-publicised rivalry between Faldo and Azinger never blew into anything and the tournament was the better for it.

The home crowds were boisterous and partisan and played the part of "the 13th man", as urged by Azinger in the build-up, perfectly. And though we thought it was close to boiling over at times it never did, save for a small minority who decided abusing Westwood was a smart thing to do.

The visiting fans, though vastly outnumbered, were tireless in the support of their team and the song-singing, flag waving and fancy-dress costumes set a new benchmark for Ryder Cup spectators.

Europe may have lost for the first time since 1999 but the 37th Ryder Cup at Valhalla was a triumph for an event which some people feared would lose its allure if the US kept losing.

As a European it's hard to take defeat, but Valhalla confirmed the Ryder Cup as one of the world's great sporting events, and the next installment at Celtic Manor can't come some soon enough.