All right chaps 'n lasses. This is it. Robbo's last BBC blog. It's been about nine years so summat had to give. There's a lot of people I'd like to thank and a few I'd like to smack with a hot parmo.

But it's not over. Robbo carries on, only in a place where you work-shy scoundrels can't get it past your officee filters. I still expect your full attention.

Not least 'cos the final team to get promoted provides an opportunity for a truly gut-wrenchingly clichéd last effort as a Towering Blackpool team gave the Bluebirds a little Eyeful and will illuminate the top league after Holloway's bunch of donkeys (according to the bookies' pre-season odds) triumphed.

But football's mandarins will be delighted to see the Tangerines back in the big time. Yes, the football fates have conspired to keep something orange in the Premier League despite Phil Brown's departure from Hull a while back. I've not liked that colour since we was beaten in the 2005 Uefa Cup final by Seville. 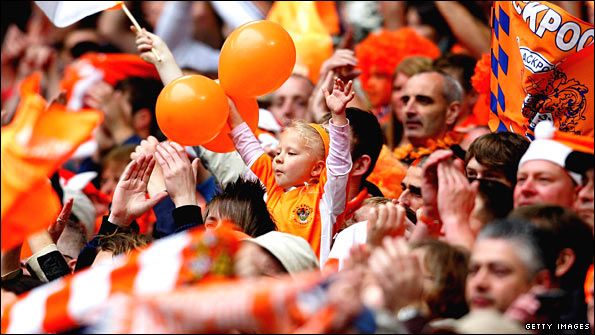 Blackpool fans are living the Tangerine dream
On a budget that made any Osbornian cuts look like chicken-feed, with record buy Charlie Adam costing about three weeks of Emmanuel Adebayor's wages, and a manager whose asides were better than his actual sides, there can't have been anyone backing them - but the tide turned for the Seasiders.

Aw crikey, that's enough of that.

It was a brilliant first half, enhanced by some right dodgy goalkeeping. And yes, Blackpool will get an absolute pasting in the top tier, but that's hardly the point really. The owner isn't going to be flashing his cash around - and the fans are going to be realistic too.

I noticed a lot of 'em wearing Play-Off Final 2010 T-shirts - no mention of victory on them whatsoever, as if getting there was enough. But you've got to say that these play-offs are the most brilliant way to end a season. Always thrilling, constantly surprising and rarely predictable. Much like this blog. Ahem.

As for the Champions League final, well it was right predictable. Van Gaal and Robben tried their best to tempt Mourinho into playing 2-3-5. It was like trying to lure a blind hermit out of his cave with a copy of Heat magazine.

Jose must positively gag on the notion of more than one up front. So it was that Inter rested back on that reliable rearguard and sniped on the break, with the lad Milito coming up trumps again. Is it me or is Mourinho simply a high-achieving George Graham clone with a better publicist?

He's got them smouldering good looks (that's the wife talking) and a team that's tighter
than my mate Tony Thompson.

Trouble is, will it be enough for the Bernabeu regulars? 'Cos there's no doubt he can put together a team to beat Barca and even lift the big prize a third time, but Mourinho's Real's going to be about as fancy as a Yorkshireman's pint-pot.

Plus the bloke likes to be in charge and doesn't mind being unpopular. I can't see the next manager at Inter being quite so bumptious as to ignore Italian footballers.

At the Bernabeu, Florentino Perez is not exactly the most pragmatic of purchasers when it comes to footy. You sometimes get the impression that Perez would rather win a keepy-uppy competition than a footy match. And it's fair to say that a lot of recent coaches at Real have been scrubbing the decks rather than holding the tiller.

Mourinho will win things, but it won't be off the back of a bunch of one-touch step-over merchants - he'll do it his way. It's not a comfy fit.

In the meantime, England have their latest trot out on the Wembley surface, and having watched a lot of people get dragged through holes in the ground on Doctor Who last week, I fear for our boys. Until I saw this Wembley I reckoned there were any number of candidates up for being the most useless sod in English football.

Every time I think of the pitch, I just want to go down me local garden centre and have a good word with someone. You've more chance of keeping your feet paddling in a pond of piranhas. 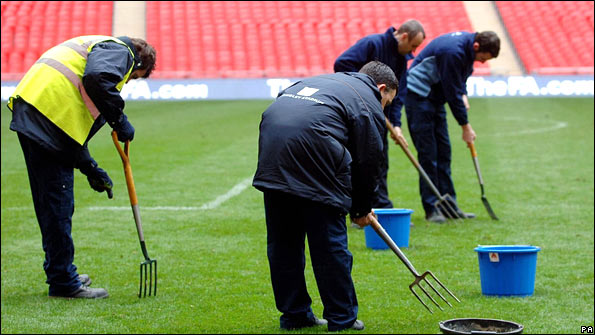 Wembley has witnessed several pitch battles
Blackpool's Taylor-Fletcher swapped his boots more time than my missus before a night out and still managed to get tangled up in the knotweed or whatever it is they're using to surface the great stadium.

I was talking about my frustrations with me son Darren and he insisted that these days you can grow as good grass here as anywhere in the world. Not that I know how he'd know. He knows nowt about lawns. He's just a part-time courier.

Any road, this blog's beginning to wilt in this summer sunshine. Besides which I'm welling up a bit, you know.

Ta to all the boys at the Beeb who've had to wrestle with these blogs, especially the mighty Chris Charles. And to all the legal eagles who have toiled to give this bouffant afro of a blog a right good two on the top and one at the sides every so often. Probably 'cos they had to.

To think that this great nation of ours will have to make do with going to https://robborobson.blogspot.com for its future entertainment.
Or making do with getting updates from https://twitter.com/robbo_robson
No more the little cartoon fella. It's the real me.

Here's hoping we'll meet at the next fork in the road. In the meantime, there's a pint getting warm in the best beer garden in Great Britain, a World Cup to enjoy and a few pencils to sharpen in anticipation of an utterly independent blog later in the week.

Raise a beer to Robbo while you're watching our boys slip and slide like newborn foals on Monday evening.

The new blog's up on Thursday. Just not here.
God bless the lot of yer. C'mon England.