There'll be conspiracy theorists aplenty wondering quite how Chelsea won so comfortably at Anfield.

Steven Gerrard looked like he might be reminding Chelsea of his ability to deliver a killer through ball (should he become available this summer) but the real reason for Liverpool's demise was simple: they're not very good.

I saw that banner depicting the heads of great Liverpool managers with Benitez in the frame too. But I can't see him staying - or Liverpool sticking with him. Rafa says that expectations were too high but then whose fault's that? He was the one who 'guaranteed' they'd still finish fourth.

Maybe he shouldn't have got his team playing grand and fluent stuff for the last 10 games of last season, then we would all have looked upon seventh as a decent effort.
On the other hand, I'd rather hear a manager make bold and confident statements, rather than this ever so very 'umble stuff we get from the likes of Harry Redknapp and Martin O'Neill.

"They're a quality side... blah blah... meagre resources... blah blah". I mean, Spurs and Villa have forked out a banker's bonus in transfer fees this season, so all this "please sir, can I have some more?" Dickensian apologies don't cut the mustard anymore. 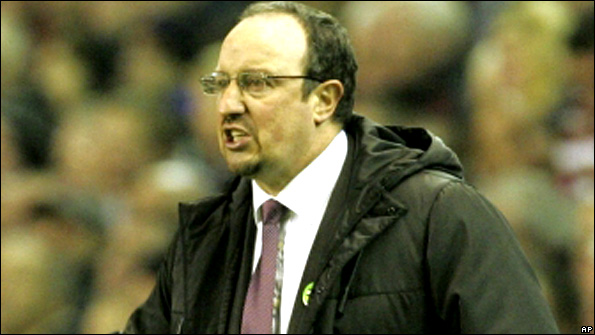 Will Rafa still be the gaffer next season?
But why have Liverpool been, relatively speaking, so abject? The fact - and facts are what Rafa loves most - the fact is that this Liverpool side is born of five long years in charge. The players are his players, by and large, and not the ones he inherited and miraculously conjured a Champs League victory from in 2005.

In other words, he may be a decent manager but Torres apart he can't find a player to save his life. If life is like a box of chocolates then Rafa is the poor fella holding the coffee cream.

It now appears that he cancelled a couple of tete a tetes with new chairman Martin Broughton for reasons best known to himself. Juve appeared to be courting the bloke, but his agent says he's desperate to stay. Given that there's summat between a 10 and 15 million pay-out in the offing if he gets the boot, you wouldn't really expect that agent to say anything else.

Of course, as Benayoun has noted, LFC have to keep hold of Torres and Gerrard if they are to do anything next year (and you can't say that's cut and dried). Or do they?
It's fair to say that Gerrard has had a rotten season. He's looked a little lost without Nando upfront, and although the blokes around him have shown all the imagination of the Institute of Actuaries, he's been looking like a sulky prince all year.

Torres's hamstrings are desperately frail and an over-reliance on an injury-prone performer isn't the wisest approach. Reina would be as big a loss right now.

So what does Broughton do? First of all, he'll have to lock Benitez in a room and ask him some serious questions, preferably with the help of DCI Gene Hunt (although being a Mancunian, Hunt'd probably go easy on the Spaniard).

If Juventus are after him, then I'd fork out for a nice meal between the interested parties and sit back with my fingers crossed. If they aren't after him, I'd invite them over for a curry and a chat any road.

Hodgson's been touted as a possible replacement but that might be 'cos he's genuinely done what 'Arry and Martin haven't done and got a team of little wealth into a major European final. When Roy says we've got a small squad and we live off scraps of food left at the back door of Harrods, you almost believe him.

Meanwhile, Chelsea look certain to lift the title in a week's time. They deserve it. They've been the best squad, if not always the best side. I won't be too elated to see the serial celeb page starlets Cole, Terry and Lamps screeching with joy, but the bookies won't be too pleased either. 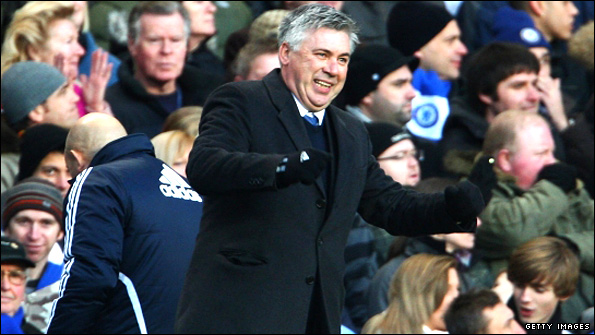 The eyebrows have it
Have to say that I'm pleased for Ancelotti, mind. He seems a thoroughly good bloke and he's not got drawn into any of the petty domestics that get to less equable blokes. There's something about that stray eyebrow that makes him look like he's ever so laissez faire but the way he's attacked these last few fixtures, with Drogba, Kalou and Anelka all up front, has been good to watch.

Good to watch are not three words I'd use about the Snooker World Championship final. I've not seen so many balls out of position since that day I spent with the Cat Protection League's Neutering Department.

Graeme Dott's gritty but charmless, like an overripe pear, and Neil Robertson looks like he's let a chimp with scissors loose on his barnet. Plus, for all his youthful Aussie appearance, he takes bleeding ages to work out what he wants to do. I mean, crikey, if he was on Countdown, by the end of the 30 seconds he'd still be writing down the letters.

It's fair to say that both men looked like they could do with a lie-down at 13-11 and it wasn't the exhibition the game was hoping for in the light of these allegations surrounding the world number one.
It won't stop us watching the whole shebang next year, of course. You just have to hope that the final is Selby-O'Sullivan or something - although I expect Ronnie to have retired from the game three times between now and then.

By which time I fully anticipate Benitez to be preparing his defensively-minded team of counter-attackers from the Stadio dell'Alpi for an all-or-nothing final against Jose Mourinho's revived and unrecognisable Liverpool. And Boro to be promoted. Fantasy football indeed.