Good day to all you skivers!

Sorry - the roads are a tad slippy and it's a bit more than a sniffle and you don't want to be spreading that round the office do you? Plus the cricket's pretty tense and your Sky Sports subscription might be up soon after you blew all that money on useless fripperies over Christmas.

And to be honest it's so damn cold that even self-respecting Teesside women are looking around for a knee-length skirt , while the menfolk have been seen rooting around for a cardy. No gloves, mind. You don't need gloves unless you're one of them namby-pamby Mediterranean lads who's never had to scrape the ice off a windscreen.

But not even one of them puffy anoraks that make you look like a Michelin man could've protected the Man United first team from the icy blast of Sir Alex Ferguson's gob following what was the most delightful surprise of the FA Cup third round. 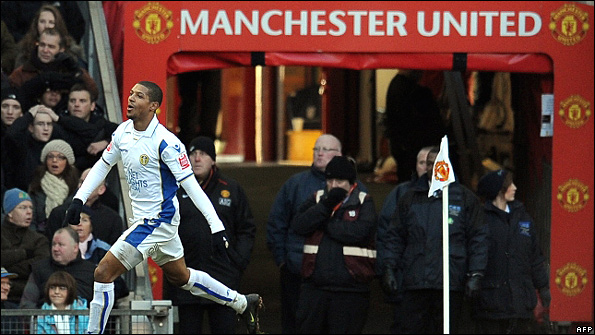 Jermaine Beckford celebrates his goal at Old Trafford
I can't say I'm the greatest fan of Leeds United FC. I read The Damned United and even though David Peace's version of Cloughie was relentlessly unpleasant, I was always on his side and never on Bremner and co's. At the time, when the club were riding high and thriving in Europe I did content myself with the thought that a lot of the lads they had were up-and-coming Englishmen.

But then came the Ridsdale spending-spree, the Bowyer-Woodgate incident, O'Leary's ill-timed and self-serving book, and suddenly the club were on the sort of slide that has a height-restriction at the local fair.

They were a template for how not to run a football club. And that's how it should be. Thing is, the club still gets 30,000 plus even for a home game against Hartlepool. (No offence 'Pool fans but your club are as likely to draw in fans as the appearance of Debbie McGee in the local panto.)

As masochism goes, though, that's right up there with the regulars at the Gallowgate End. And as with the Toon Army, the rewards are coming.

Set that against Manchester United - who have in the 10 years since Leeds last topped the Premiership made their cross-Pennine rivals chew through anything from the odd fingernail to great chunks of MDF in a state of apoplectic envy - and you have the makings of a great story.

And Leeds thoroughly deserved the victory. (Mick McCarthy, take flaming note!) Grayson's a grand, down-to-earth sort of boss and in Beckford they've got a lad who speaks fluent Finish.

The jibes at young Jermaine are that he does nowt but score. Right. And the problem is? I mean I didn't see any of the lads running after him after his winner grabbing him by the shirt-collar and yelling 'why don't you pass the blinking thing a bit more you self-centred so-and-so?'

Clearly Beckford is bound for better things, although whether he'll end up in front of an Elland Road-sized crowd every week is debatable. But he's a handful and the United defenders (albeit Evans and Brown) couldn't really keep tabs on him.

Every year we get some no-mark nay-sayers trying to do down the FA Cup and every year summat like this gets thrown up and a bunch of Leeds antagonists like the Blue Bell regulars start punching the air with glee on their behalf.

You might say the Carling Cup does the same thing but the difference is that the weekend is still set aside for the sweet FA.

Of course, had Wayne Rooney not borrowed Michael Owen's shooting boots - and Owen not borrowed Gary Neville's - there's every chance that we'd have nowt to crow about.

Fergie did his best to be magnanimous in defeat. I even let slip a 'good on yer' following his acceptance that Leeds deserved the win. But then he had to have his mulled whine. The injury-time allowed was an insult to the players, apparently. I choked on me stale mince pie.

Can't we make 2010 be the year when we finally said good bye to the Meaningless Post-Match Whinge? There'll be United stalwarts out there saying it's petty of me to mention this - but that's my point really - it's a cheap pop at the officials from Fergie and I can't see what's served by having it.

It's the scab on the knee of your top Premier League manager and the sooner they stop picking at it the sooner it'll heal up and look good as new. Pack it in.

You can't help looking at the cricket and aching to be there among the chumps of the Barmy Army, can you? Twenty eight degrees and South Africa seemingly going down the Swannee (until Steyn and Morkel fought back). 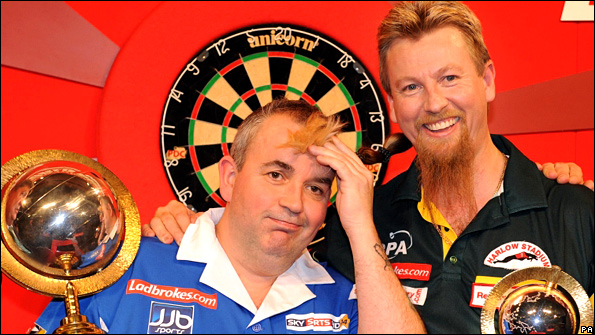 Phil Taylor and Simon Whitlock
If they were doing Sports Personality of the Year now, you'd reckon on a late push for Swann. Like good fried bread, the bicycle clip and the achievement of fame without the assistance of that high-waisted plank Cowell, the art of off-spinning appeared to have been lost to the average Englishman.

(Of course Monty had his year in the sun but it's hard not to put at least half his popularity down to the fact that he fielded like a man trying to waft away a bad smell that he himself had brought forth.)

Swann's got a personality for a start - he's bright, amusing and let's face it, the down-the-order blazing with the bat has been right handy too.

Which is not to say that he's the most overlooked sportsman in the country - that honour goes to one Phil 'The Power' Taylor, who saw off a man dressed as Vidal Sassoon's nightmare to win his 15th world title.

Fifteen times he's been the best at throwing a tiny arrow at some ridiculously small chunks at cork. I don't care if the man's got more rolls under that polyester shirt than you find in the bakery shelves at Tesco's. I don't care if the training regime involves the simple flexing of the right arm. His achievements are unsurpassable.