And when I say 'Beast' I don't mean that wandering outhouse Preston brought on against Chelsea - whatsisname, Parkin? I mean Stoke City.

The counterpart being, of course, the choreographed herd of gambolling lambs that Wenger put out on the pitch on Sunday.

Now there's a lot of Gooners I've heard who have lambasted that game on two counts: firstly that it's a long way to Stoke-on-Trent (and a lot of money, too) and it'd be nice to see a team put their backs into it; secondly, that Pulis's team would line up in front of the mighty Pele and laugh right into the great man's face if he ever used the phrase 'the beautiful game' in their direction.

In a way they're right on both counts. Except that Arsenal managed to hang on in there till the big Gunners came off the bench - and only then did it fall apart. And also, as every Stoke City fan will tell you, they are very effective at what they do and who is anyone else to tell Pulis's players how to play the game?

This is not to say that I'd ever pay good money to watch Stoke. Potters loyalists will always point to the odd Etherington dash or Fuller pirouette as evidence of the artistry within their ranks. But it's hokum. They have a system and it makes Peter Beardsley look like Orlando Bloom. 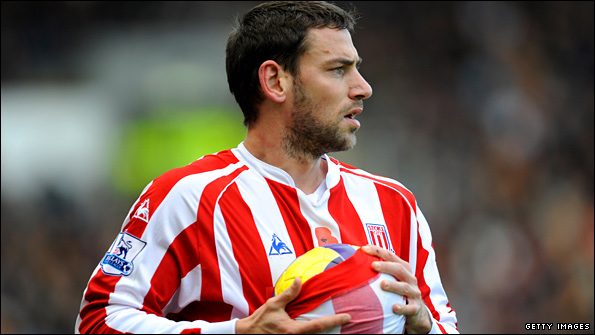 Rory Delap - Stoke's not-so-secret weapon
Whereas Stoke are like one of them second-hand furniture stalls where they line up all the chipped and lumpy wardrobes outside the front, Arsenal are one of those state-of-the-art Scandinavian shops where all the furniture looks like it's been built out of highly-specified Lego. One's clunky, bumpy and very practical; the other you hardly dare touch in case you ruin it.

Both teams play football, yes, but that's like saying Van Gogh and the bloke who re-decorated our kitchen are both painters. (And incidentally, the new colour scheme has changed from magnolia to harvest white - I can't tell the flaming difference but then I lack a woman's eye. Or her gullibility.)

Now before City fans punch their fists through their screens and out of mine so they can grab my three-chinned Teesside throat and inform me that I'm not welcome in the Potteries, let me reassure you that I'm on your side. I don't want to sound all Nick Clegg but... I may not like the way you play but I defend your right to play that way.

And so what if that means the centre-backs plant it up to the big men up front (surely we could call him Robert Hoof now, as that's all the lad does with the ball?)

So what if Delap uses a towel to a more irritating degree than even Greg Rusedski in his pomp? (The ball-boys at the Britannia Stadium have more hand-wipes at the ready than one of them numpties who patrols the gents at an up-itself nite-spot.) But it's not like you don't know what's coming from Rory.

I mean I feel uncomfortable about a team's greatest weapon coming from what was intended as a mere means of re-starting play, but there's an art to the Delapidator's whangs. It sort of reminds me of flicking chewed-up paper off the end of your ruler at the smart kids in class - and it did for Sol and co in the end.

Any road, on the day Arsenal's beauty was very much skin-deep. They were as fragile as Keira Knightley's ankles.

Wenger wasn't complaining either. His team did the best they could, Campbell did OK in a big, wooden sort of a way, but le Prof might think twice before playing Sunday's full-backs again. Coquelin and Traore had the bewildered air of dim-witted Labradors who go haring after a stick only to find that you kept the thing in your hand all along.

But you can be pretty sure that Arsene isn't too miffed about one less tournament to play in. And with Villa, United, Chelsea and Liverpool to come, I'm not sure what else he was expected to do for a one-off Cup tie. 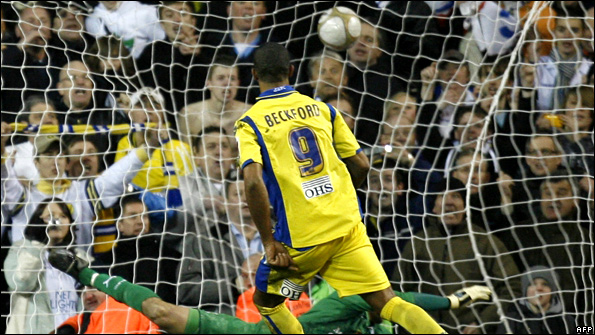 Jermaine Beckford smashes home his late penalty against Spurs
It was a pretty lively fourth round all in all. Leeds's last-gasp equaliser put the lid on it nicely. Beckford seems a cracking player to me - plus he's happy up there on his tod a lot of the time which in the day and age of the 4-5-1 is a great strength for a striker to have. And he can score from two yards, unlike say Darren Carter. Putting it over from there was a miracle on a par with my mate Tony Thompson managing to lose his ball during a virtual golf game.

You have the uneasy feeling, mind you, that Chelsea could stroll to another cup win without getting out of their state-of-the-art armchairs. And that won't do the tournament any good.

Still it's a wonderful thing for all that... How else would we have Southampton hosting Pompey? (Unless they had a Mutual Loathing Testimonial for old 'Arry of course!) That'll be a nice friendly local knees-up, won't it? It'll make City-United at Eastlands look like a bit of a fracas at the local bridge club.

Of course, while all that was going on, Wayne Rooney bagged four as United went top. Hmm. Rumours are that United are going to pay Wazza £150,000 a week to keep him. Maybe his team-mates can chip in a bit of their wages given he's keeping them involved in the title race.

And Gary Neville's autobiography's coming out soon! I look forward to chapters on overlapping Becks, the maintenance of patchy facial hair, and on how to cultivate warm relationships with the opposition fans.

Plus the publishers concerned already published Stevie and Carra's major tomes so expect this to be another page-burner [sic]. I can see it becoming another source of emergency paper in the smallest room, meself.